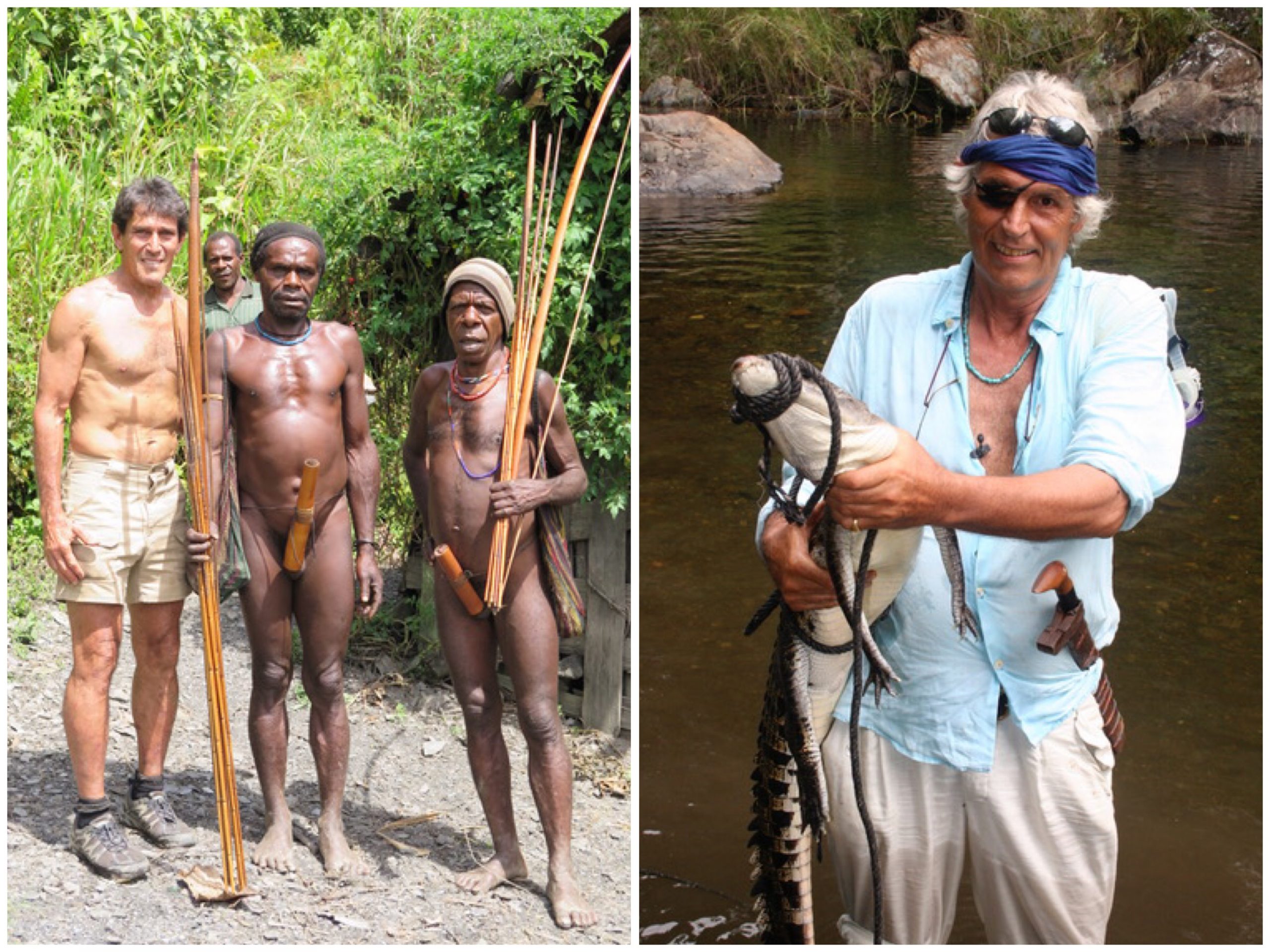 The world’s largest archipelago, and home to one of the most diverse group of ethnic communities and endemic species, has been the setting for the cinematic life of two great men’s exploration studies and missionary work. For John Cutts and  Lawrence Blair, Indonesia has been made more beautiful by its natives—resolute in their ways but authentic in character. The years they have spent in the country has transformed them both, as much as they have influenced the way the world sees Indonesia. 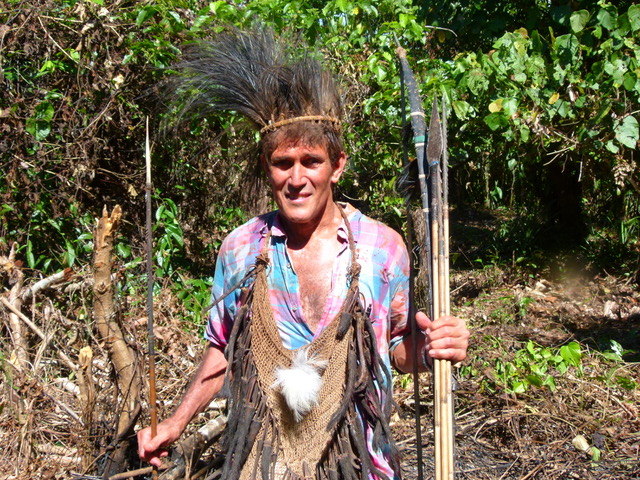 John Cutts had lived in Indonesia’s easternmost province of West Papua ever since he was two years old. His parents, Bill and Gracie Cutts, missionaries of The Christian and Missionary Alliance, had first stepped foot on the Papuan region in 1950 and their missionary work with the isolated Pogapa Village has progressed into John’s life-long mission, greatly influencing the Moni people’s overall wellbeing. They had been the first few people of western descent to visit the isolated highlands inhabited by hundreds of diverse ethnic tribes. At present, the Moni’s recognize John as a significant part of their lives – a respected figure who establishes direction towards progress and peace within the community. Though by genetics and appearance, John is unmistakably an American, by heart, ways, and character, he embodies a Moni. 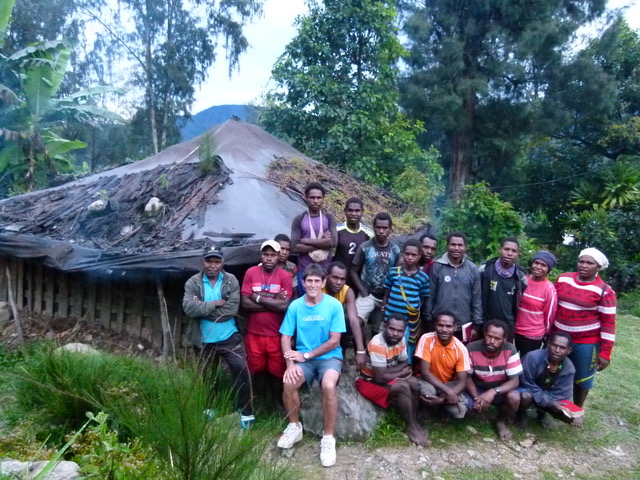 Papua’s inherent culture and way of life became a natural part of John’s foundational years. A very enthusiastic and highly energetic child, he easily developed a connection with the Moni’s as they also felt a genuine interest in his unique antics as a then outsider. He participated in the Moni people’s hunt and gather activities and simply became one of the members of the community. Growing up as one of the Moni’s, John’s childhood was filled with activities and challenges incomparable to the escapades of a regular American boy. He was taught to make arrows, traps, huts and even woven bracelets from various natural materials. John or Zani Mala as the Moni’s would fondly call him was introduced and immersed to the countless plants and natural resources endemic in Pogapa, which has been woven in the lives of the community members. They utilized materials such as suds from the Zumba tree as a form of soap, and for medical needs, the coarse leaves of the Mese plant were used to alleviate certain external aches and pains.

Growing up as part of the Moni people also meant introducing forms of innovation for John, including influencing the way the villagers cultivated their agricultural crops. It was John who brought assorted seedlings in Pogapa and taught the Moni’s to grow fresh produce such as heirloom tomatoes, lettuce, avocados, cucumber, and radish, which they currently consume and market at the same time.

John’s parents were similarly steadfast in developing the Moni’s spiritual transformation and development to further advance their quality of life. Bill Cutts’ perseverance led him to establish the Moni’s present-day alphabet in order to teach them about the Bible.

Soaring high and beyond 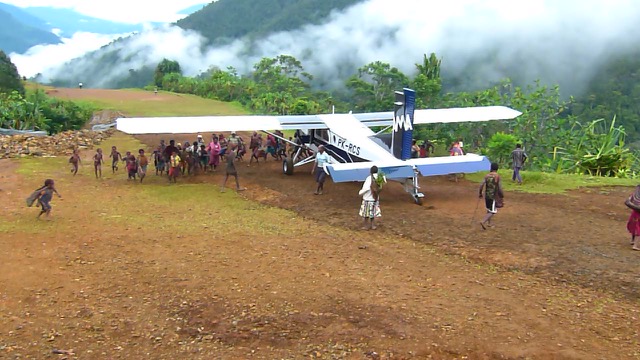 John returned to the United States to earn his degree and worked with airplanes to earn a living. He eventually traveled back to his home in Papua with his wife, where they eventually raised their family. His life has been deeply rooted in Papua that his heart led him to go back and continue his parents’ missionary work in the region.

As a trained private pilot, John knew the importance of efficient transportation to and from secluded Papua to further improve the Moni’s quality of life. Because of the interior highlands’ topography, it has been very difficult to create bridges and even airstrips, which required special kinds of aircraft to match the area’s tough terrain. John has built a total of 16 airstrips across different areas throughout his life in Papua, opening up the villages to missionary workers including teachers, pastors, and medical workers. He is now currently shipping an airplane built in the USA to Papua. The aircraft will be used for training the Papuans to fly, John’s and the village people’s long-time dream, to further improve access into their many remote areas. 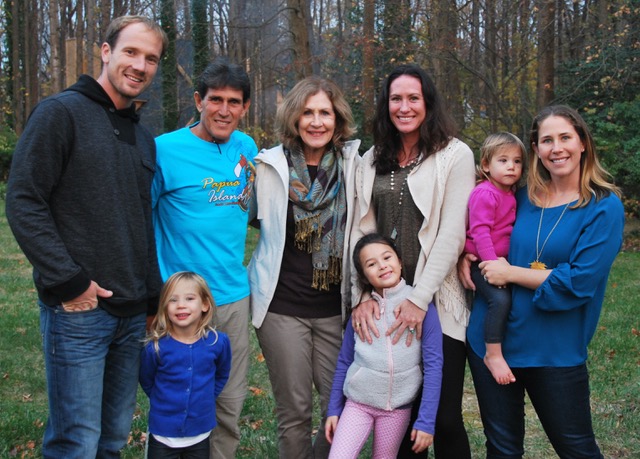 John’s family has selflessly shared a part of themselves to the Moni people, and the whole journey has been both a perilous and fulfilling one. The Cutts’ dedication to introduce spiritual formation and progress earned them the community’s respect. With the desire to nourish and multiply the seeds his parents have planted, founding Village Heartbeat with his wife Joy, whom he dotingly describes as kind, energetic and dedicated person. Joy’s roots are not too far from Pogapa; she was born in Bangkok and fluent in the Thai language. Through this non-profit organization, John continuously aims to build up tribe leaders who are deeply connected to the members of their community and who could lead from a position of compassion and integrity.

Village Heartbeat ensures that the different communities of the Papuan region are equipped to thrive alongside the constant economic and social development within the country. They also place an emphasis on partnerships with government and other concerned groups who can initiate and sustain projects on social, educational and health aspects. 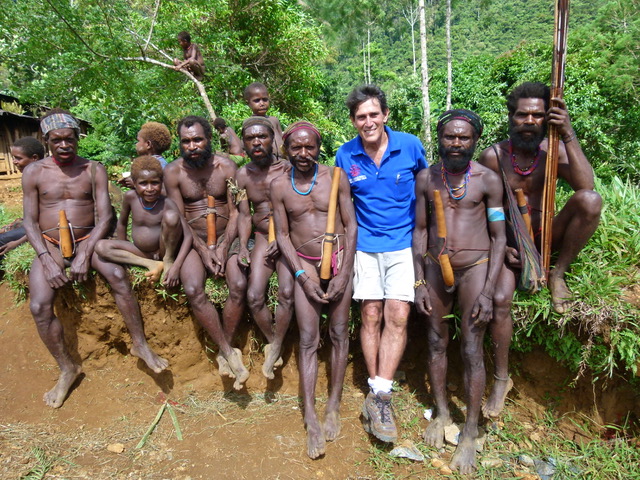 Apart from John’s spiritual leadership, the Moni’s has grown to recognize John as their unofficial advisor and leader. He is someone whom the people listen to and trust for matters integral to sustain a peaceful and progressive community. Growing together with the Moni’s has naturally propelled John to become a big brother with genuine concern for the Papuans. John’s wisdom has helped community members address their problems such as a mother’s concern of not having enough milk, a woman with malaria, and other civic issues.

Indonesia’s present advancements and its social, health and political implications are challenging the simultaneous preservation and overall progress of the Moni’s. With John bridging the gap between the modern world and Pogapa’s traditional culture, his current role in the lives of the Papuan people today could not be denied. For the outside world, Zani Mala is the key to the undiscovered realm of the Moni’s.

A true Moni brother, John has fully lived a life of purpose. His heart of service has consistently showered the remote Papuan communities with love and care, and his capacity-building efforts have sought to pass on qualities of resilience and compassion. Discover more about John and his mission to uplift the lives of the Moni’s at http://villageheartbeat.org/. 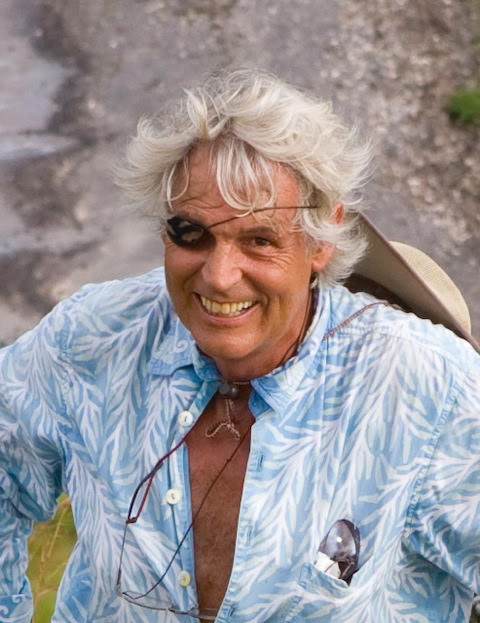 An anthropologist, master voyager and boogie board surfer, Dr. Lawrence Blair has lived and breathed a life of adventure. His relentless spirit in immersing himself in the traditional and culturally rich life in the Eastern Indonesian archipelago has led him to become a renowned filmmaker, author, and speaker. His band of thrill-seekers who have sailed across the islands or explored on land with him includes Mick Jagger and David Bowie, to name but a few luminaries. Educated in Mexico and France during his younger years, he eventually received his Ph.D. upon authoring one of the pioneering doctoral theses on psychoanthropology.

Lawrence Blair’s curiosity about the Indonesian islands was born out of the spiritual movements he was exposed to while growing up in Mexico. He discovered an enthralling sense of awareness and sensitivity during his first visit to the country in 1965, which was greatly lacking in the west. His interest grew further upon reading the works of British naturalist Alfred Russel Wallace, who spent eight years in Indonesia.

In 1972, Lawrence and his brother, Lorne Blair, took off from Wallace’s explorations with their video cameras in tow to develop more in-depth studies on Indonesia’s mystical islands and its people’s way of life. Their longest expedition spanned nine months of sailing on a ship without an engine while the Bugis guided them from Makassar to Kepulauan Aru. Today, he continues to share thrilling accounts on how they endured the wrath of erupting volcanoes and catastrophic storms with only the wind and their instincts as their compass. 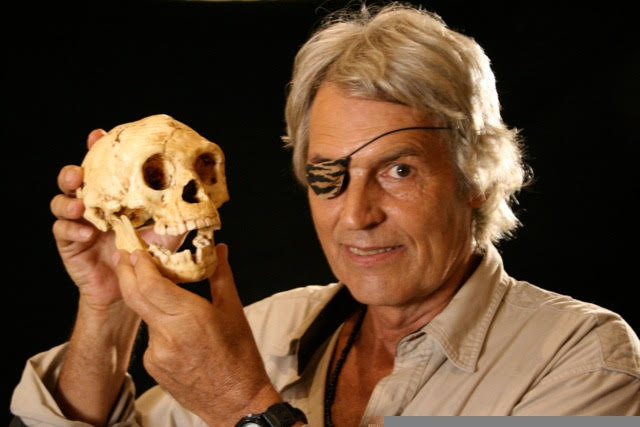 Working with over eighty hours of footage, Lawrence and Lorne’s Indonesian adventure was introduced to the world in 1988 through a five-part Emmy award-winning documentary film series entitled Ring of Fire. Lawrence also wrote the companion book of the same title, which made it to the UK’s TOP TEN BESTSELLER LIST for ten weeks.

The international audience witnessed the historical burial of the last king of Toraja, signifying the iconic transitioning of an empire to a new leadership and political order – an archaic ritual that was shown for the first time in the ‘80s. The Blair brothers’ hair-raising quest also includes their encounters with the spirited Asmat tribe of New Guinea, a cannibal ethnic group recognized for creating the most important prehistoric art in the world. Through the hard work of two passionate and determined wanderers, Eastern Indonesia’s rich culture and biodiversity were finally visually revealed and marked on the world map.

With the desire to uncover more of the unseen world, Lawrence produced Myths, Magic, and Monsters in 2005, which was distributed by Sky TV. In this five-part series, he immersed himself deep in the unknown and captured the first moving footage of the Laweri, the most powerfully bio-luminescent fish in nature, long associated with Loro Kidul, the Sea Goddess of these southern islands. 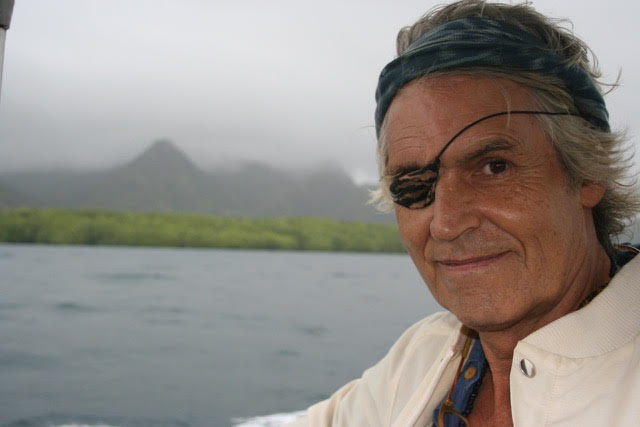 Indonesia has made an indelible mark in Lawrence Blair and it will remain to be both his home and a place abounding with endless discoveries. His current project is a homage to the country’s world-famous volcanic feature, where he dives deeper into the uncharted depths beneath Indonesia’s remarkable volcanoes and its surrounding life forms. According to Lawrence, “Adventure travel has less to do with what’s there to be seen as what we have in us to see. We can travel the globe and see nothing or wander through our own gardens and be filled with awe by what we’d previously never imagined. For me, Indonesia remains one of the last wild bits of the bottom of the garden of our world.”

Dr. Lawrence Blair’s colorful life filled with nerve-wracking conquests and breakthroughs is continuously inspiring a lot of travelers to pursue their own Pacific island quest. At present, one can charter a boat in Indonesia and cruise through the archipelago like a 19th-century explorer. Tourists can sail into Malaku or the spice islands and follow Lawrence’s footprints on its shorelines and marvel at the province’s famous volcanoes. Discover more of Lawrence Blair’s books, series, and current projects at https://www.drlawrenceblair.com.

An expedition unlike any other, one can cruise with Lawrence Blair aboard a Lamima luxury sailing yacht for a full-on Indonesian sea voyage. Another meaningful quest is a guided trip with John Cutts to meet the Moni’s of Pogapa, trek amongst the rich wildlife of Papua and to learn more about the Moni’s culture, habitat and way of life.