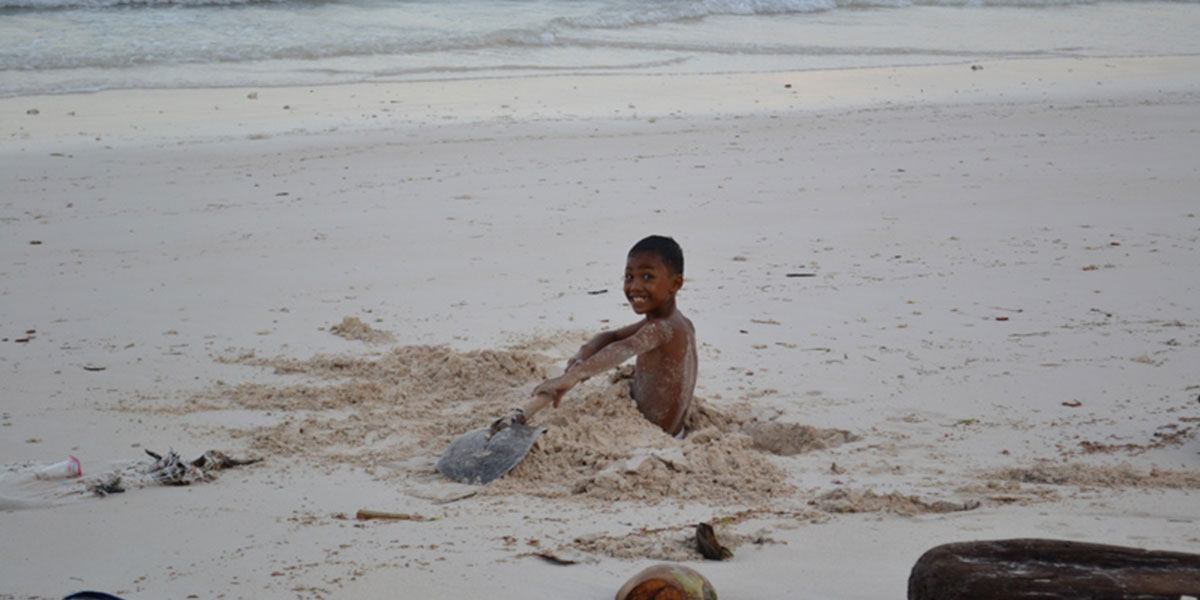 Boat Building on the Beach

It all started on a beach in Bira, Sulawesi…

On the beach at Bira, in the regency dubbed ‘butta panrita lopi’ (shipbuilders’ kampong), Lamima is emerging in the age-old way of the Bugis boat-builders, skin first!

Instead of first lofting frames and fitting planks to them in the way Dominique has seen all over the world, they’ve been shaping her ‘by eye’, crafting an amazing wooden shell on the water’s edge.

The difference in method employed by Haji Baso lies in the sequence of the hull’s assembly. After the keel-laying ceremony, Lamima’s stem and stern posts were erected in the usual way. The central stringer, an enormous beam called the ‘naga-naga’ or dragon, was bolted through to the keel plank. Next, however, rather than setting up a whole array of sawn frames to determine the shape of the hull, Haji Baso’s men began to attach planks to both sides of her keel. By means of wooden pegs or ‘passak’ driven in along the edges of these ‘garboard planks’, another row was pegged to them. One by one, day-by-day, rows of planks have been added until Lamima’s shape has begun to emerge,  as Marcelo designed her.

As the planking progressed, ribs were fitted inside to strengthen the shell it formed. These were pegged to the planks, to the keel, and to each other where their segments  join. And then come the ‘lepe lepe’ (ceiling stringers). These are longitudinal planks, fitted on top of the ribs to add strength to the hull along its length – ensuring that Lamima, once completed, will not only be elegant, but also an extremely sound and strongly-built vessel.

The first planks are laid.

The ribs are chiseled by hand before being fitted

28 March 2012 –  Lamima, nine months away from her launch into the tropical waters of Sulawesi

Getting ready to fit the” lepe, lepe” (longitudinal planks) on top of the ribs

View of the starboard aft-deck

September 2012 –  The first of 2 layers of Marine plywood are laid out on the main deck. The teak will be added on top of these two layers.

September 2012 – View of the transom into which the deck is framed.