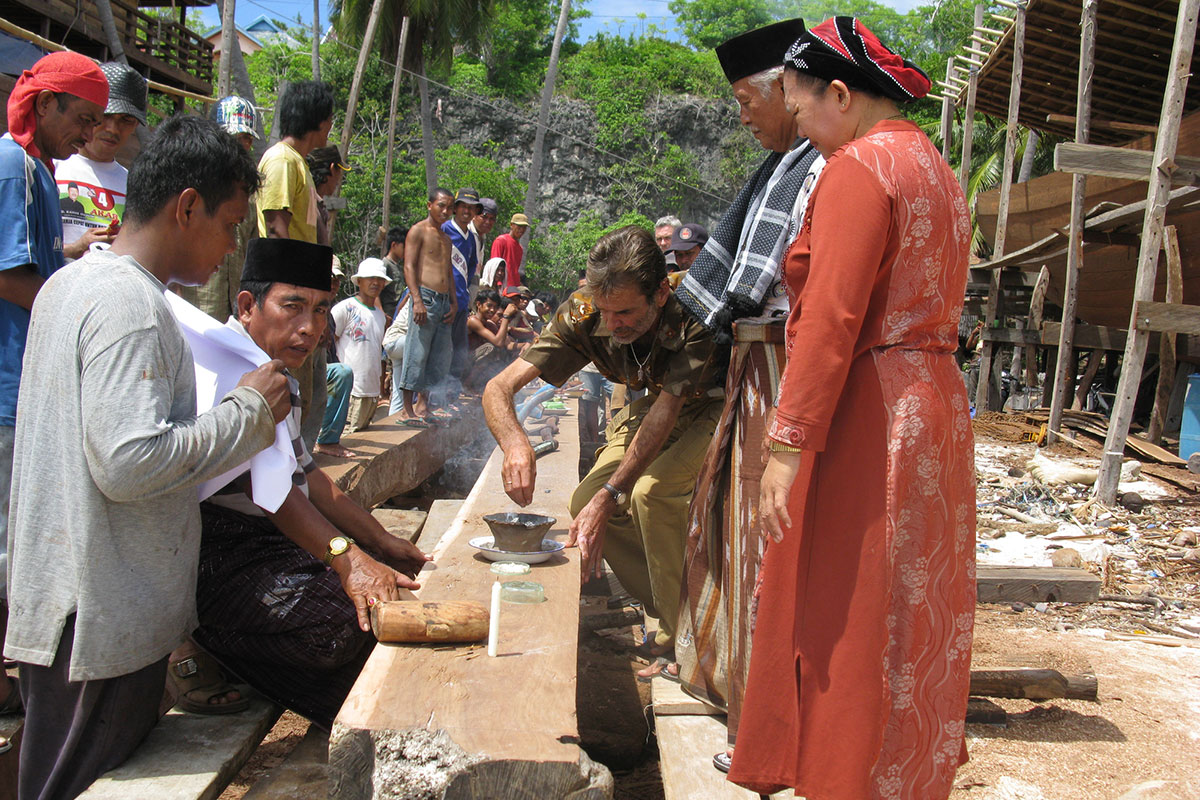 We’re excited – the keel of our amazing ketch, Lamima, has been laid on the shore at Bira in south Sulawesi! True to ancient boat-building traditions of the Konjo tribe, ceremonial sweet rice was prepared, prayers were intoned and incense burned as the entire village, men, women, and children celebrated the keel-laying ritual.

The dreams of Dominique, my husband, are coming true. Standing there on the sun-drenched beach he can see the splendour of Lamima’s traditional Phinisi hull materializing as the men of Ara work steadily, silently, skillfully plying their forefather’s trade, crafting the local hardwoods with hand tools while the tides flood and ebb, rise and fall.

They’ve been building like this for centuries – it’s in their blood, instinctive, and bears no comparison to the noise and clamour of modern European shipbuilding yards. In Bira there’s no discord from clanging steel and shouted orders, no bickering over costings, no deadline tensions, no drawings even – but Dominique can see that the results are equally splendid, the quality of the vessel supurb.

Originally such ‘prahus’ were employed as cargo ships, carriers of sandalwood, spices and ceremonial textiles along the spice routes to the ancient kingdoms of China and India. Over the centuries their rig evolved from rectangular to gaff sails, the Bugis people skilfully adapting what they saw on foreign vessels to what worked best for their local winds and waters. The result was the magnificent sailing Phinisis unique to Indonesia.

And now they’re building such a vessel for us. We trust these craftsmen implicitly; boatbuilding is their sole livelihood and the entire community has become involved. Lamima is their personal creation and, true to the meaning of her name, she’s regarded as a symbol of family unity and warmth. The master builder, Haji Baso, is her spiritual mother and delivery is expected in 2013.

When they launch her into her natural element she will find her own life spirit. That will be the time when Dominique’s experience (gained during his 20 years as a captain of mega-yachts) will combine harmoniously with the Konjo tribe’s skills. What a combination – the elegance and grandeur of the ancient Phinisi craft married to first-hand knowledge of technology, safety and five-star service.

But there’s a lot to do before Lamima is launched into the role of luxury charter yacht. While Dominique researches untrodden locations for her future charter guests, naval architect Marcelo Penna is busy making sure the technical and safety side of things are correct. Dominique’s friend and partner, Louis, is generously taking care of the expenses and I’m also taking part in this venture.

As well as keeping the home fires burning for Dominique, I’ll be tracking the project as it develops – recording progress in the ship yard, posting photos direct from Sulawesi and giving some background on the exotic locations for future cruising. I’m here to take you along with us on a virtual tour of Lamima’s world until the day you join her for a real and unparalleled cruising adventure, the trip of a lifetime exploring the rich and colourful delights of Southeast Asia.