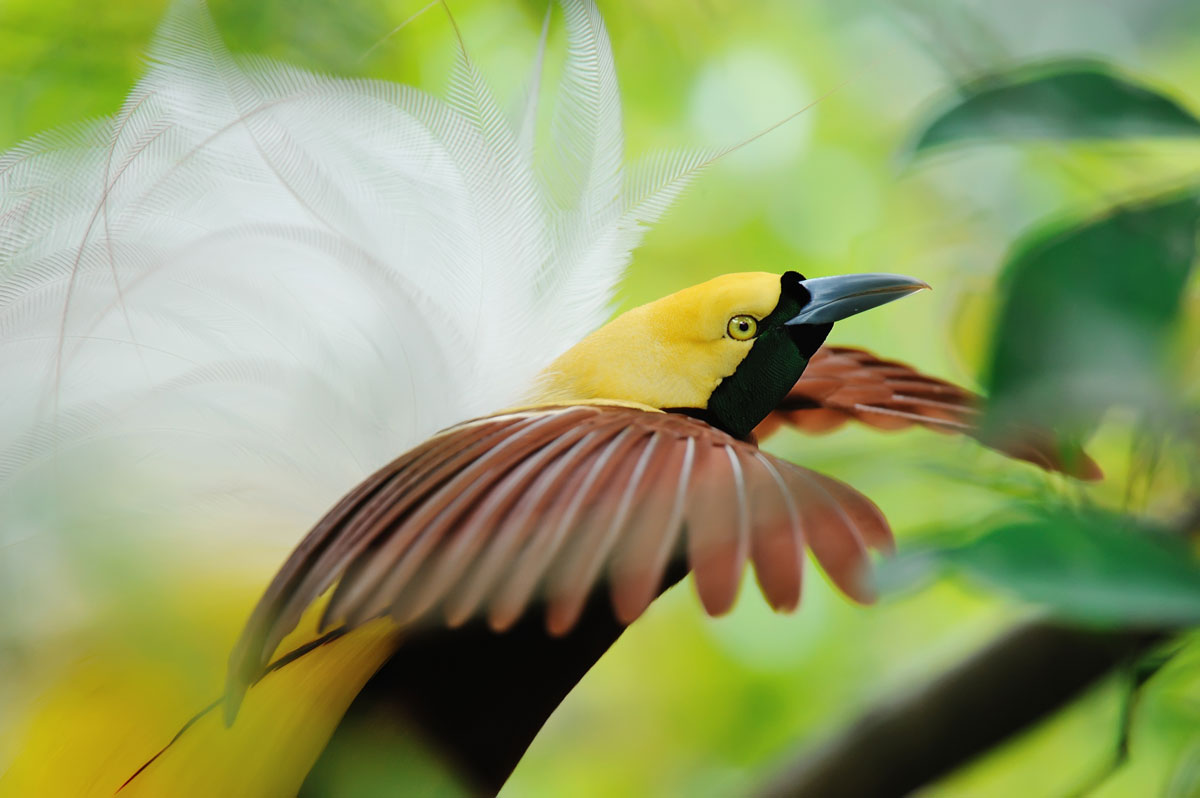 Western New Guinea’s lush and pristine forests make a perfect sanctuary for countless living organisms and diverse bird species. The expansive array of birds inhabiting the land fused with the picturesque landscape and a wide-ranging avifauna makes the island an avian haven and one of the most exciting bird-watching destinations in the world. The immense bird diversity of the West Papua region includes the Cassowaries, Western Crowned pigeon, Black-winged lory, Red Birds of Paradise, and Birds of Paradise, to name a few. 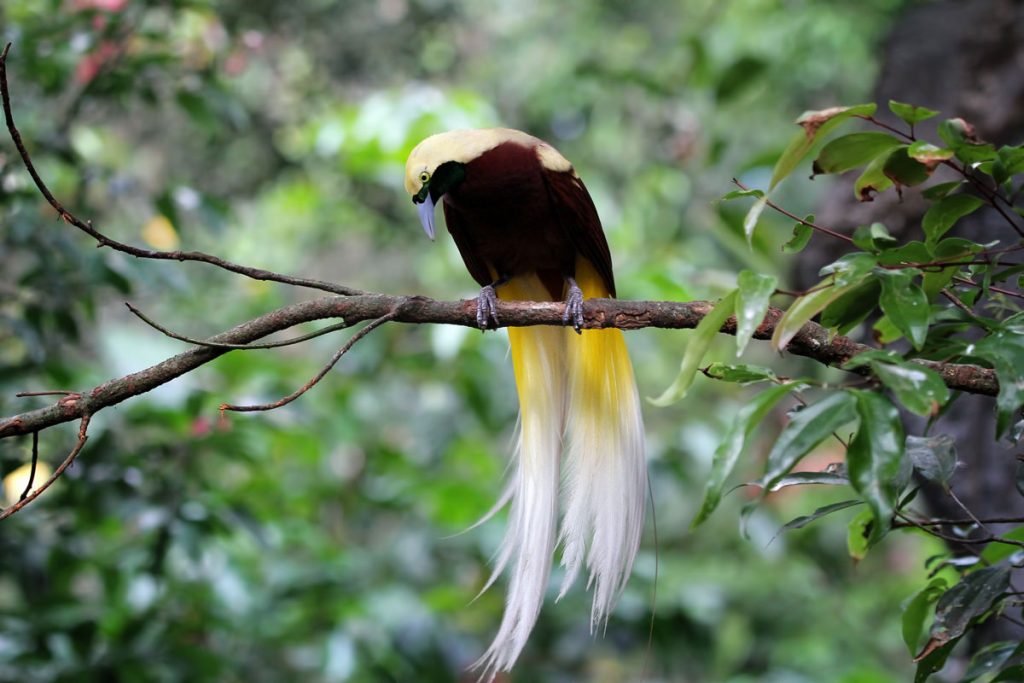 Beautiful Cendrawasih bird on a branch

There are about forty bird of paradise species in Indonesia, with thirty-seven species endemic to Papua. In Raja Ampat alone, there are over 250 bird species and new sorts continue to be discovered over the years. Among these species, perhaps the most remarkable is the bird of paradise, which is also regarded as one of Papua’s iconic symbols, this area is best to experience using pinisi to hire in Indonesia.

Locally known as the Cendrawasih and believed by locals to be the reincarnation of fairies flitting around the jungles, these charming and magnificent birds are distinguished by their resplendent plumage. They come in a range of vibrant colors and varying shapes and sizes — from the primary-colored paradise crow to the flamboyant Raggiana bird of paradise. 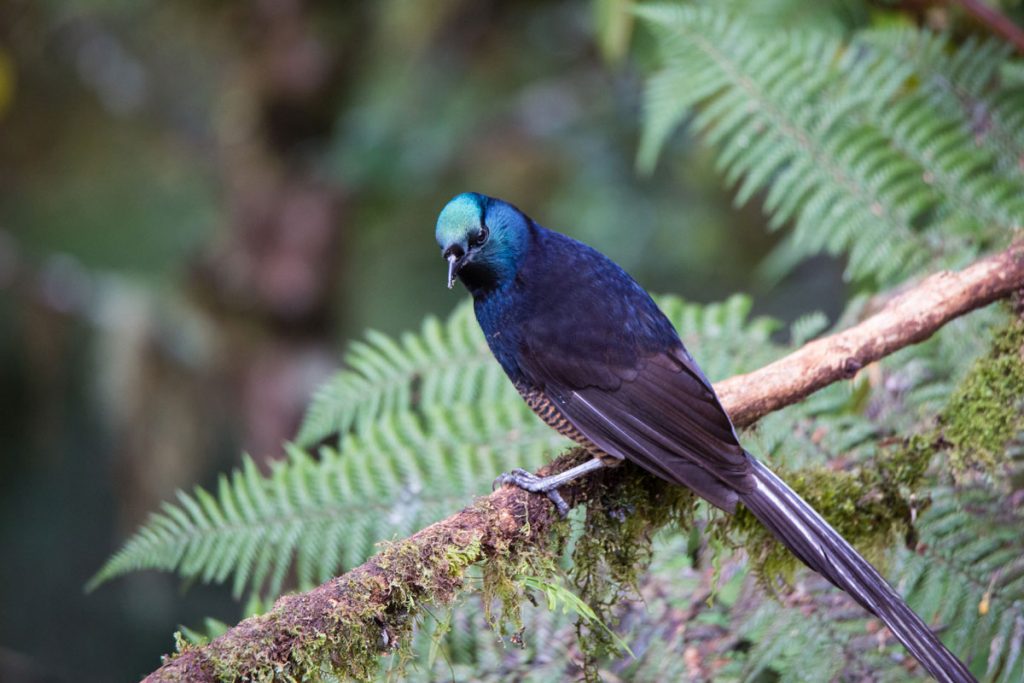 The male bird of paradise can be easily identified by the turquoise skin at the back of their head, interweaved with fine black velvety feathers that have coppery-bronze luster. Their bright colors and ornaments shine even more during their courtship display when they fluff up their uniquely-shaped feathers with precision to change the outline of their feathers into a new shape. 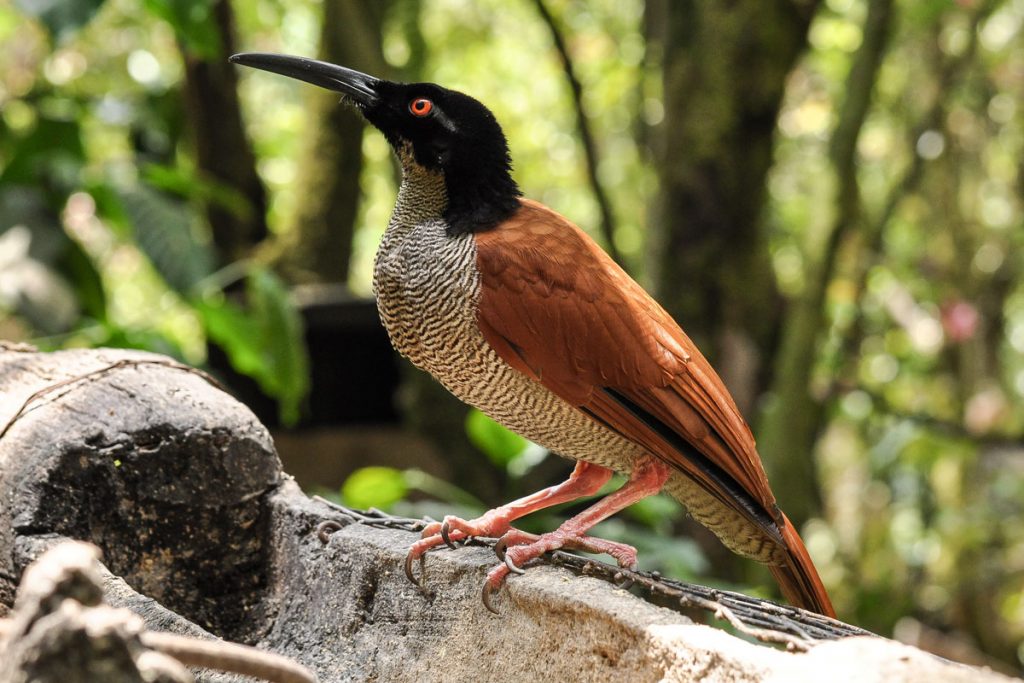 Female bird of paradise, on the other hand, have reddish-brown upper body, brown wings, and buff-toned lower body, and are much less ornate compared to the males. Their physical features may not be as sophisticated as the males, but the female birds of paradise are very particular when mating. At the end of the male’s display, he is examined and evaluated by the female through close inspection and sometimes touching the male prior to decision making.

When it comes to their diet, the bird of paradise consumes fruit and arthropods, small amounts of nectar, and small vertebrates. The lifespan of the species is unknown but they live from 8-15 years in the wild and may live up to 30 years in captivity if properly taken care of. 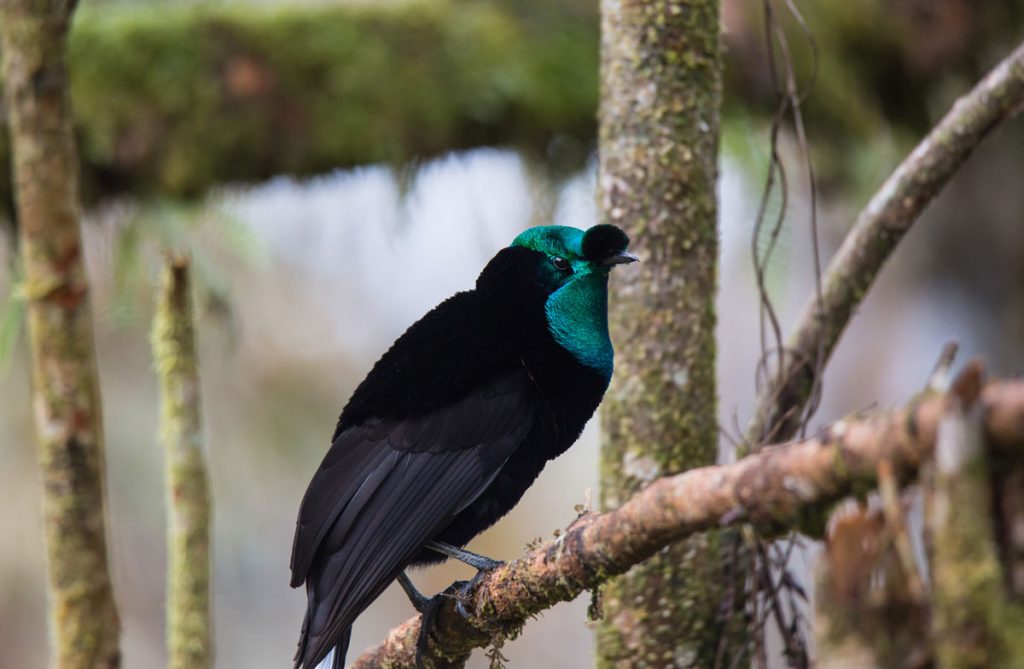 Red bird of paradise have very prominent crimson plumes that blaze through daybreak and twilight; however, it can also easily blend in with the deep forests of Batanta, Waigeo, and Gam with its emerald green face, black tail feathers, and dark green feather balls on top of its eyes. In contrast, the female red bird of paradise have no red plumes and are unadorned compared to the males. For sustenance, they feed on fruits, berries, and arthropods. 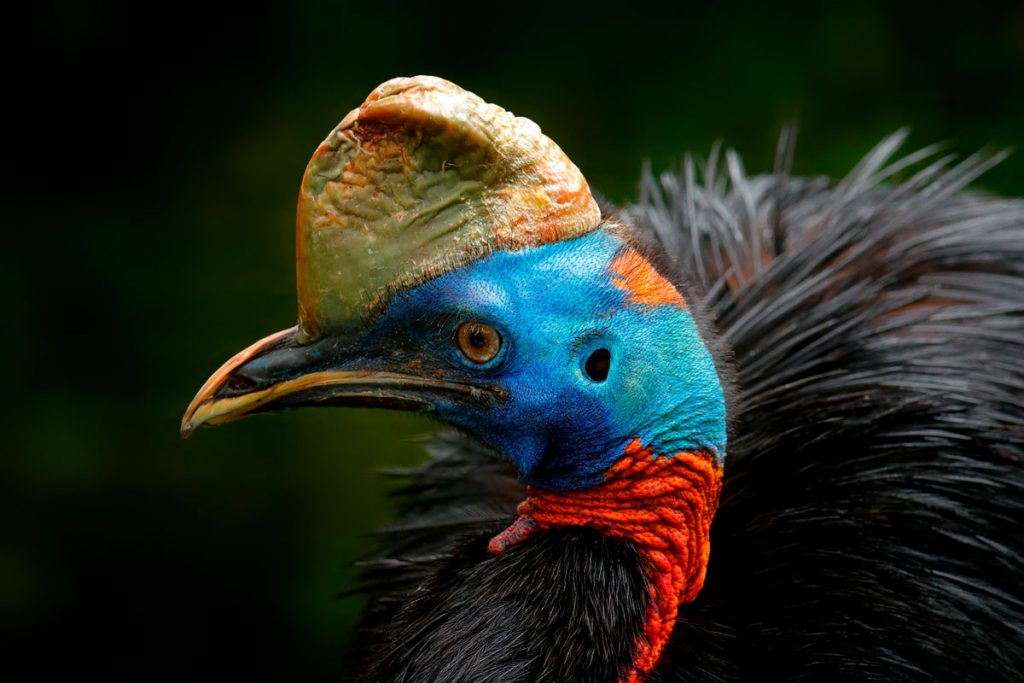 The name cassowary is Papuan in origin. It originates from ‘kasu’, which means horned, and ‘wari’, which means head — in reference to the casque, a hollow structure made of keratin found atop its head.

They are typically shy and reclusive, but like most animals, they become aggressive when threatened and defend their selves with their long and piercing claws. For sustenance, cassowaries consume fruits, fungi, invertebrates, and small vertebrates. With regard to their physique, female cassowaries outweigh the male cassowaries in general. There are three living cassowary species, all of which bear a black plumage accentuated by rich hues in a particular body part.

Next, settling in the islands of New Guinea, New Britain, and Yapen, are the northern cassowaries, guised with a bright red or yellow neck and blue skin.

Lastly, the solitary dwarf cassowaries whose cheeks are tinted pink and neck dyed with blue, dwelling on the forests of New Guinea, New Britain, and Yapen. Contrary to its name, dwarf cassowaries are large birds but they appear slightly smaller than the other kinds. 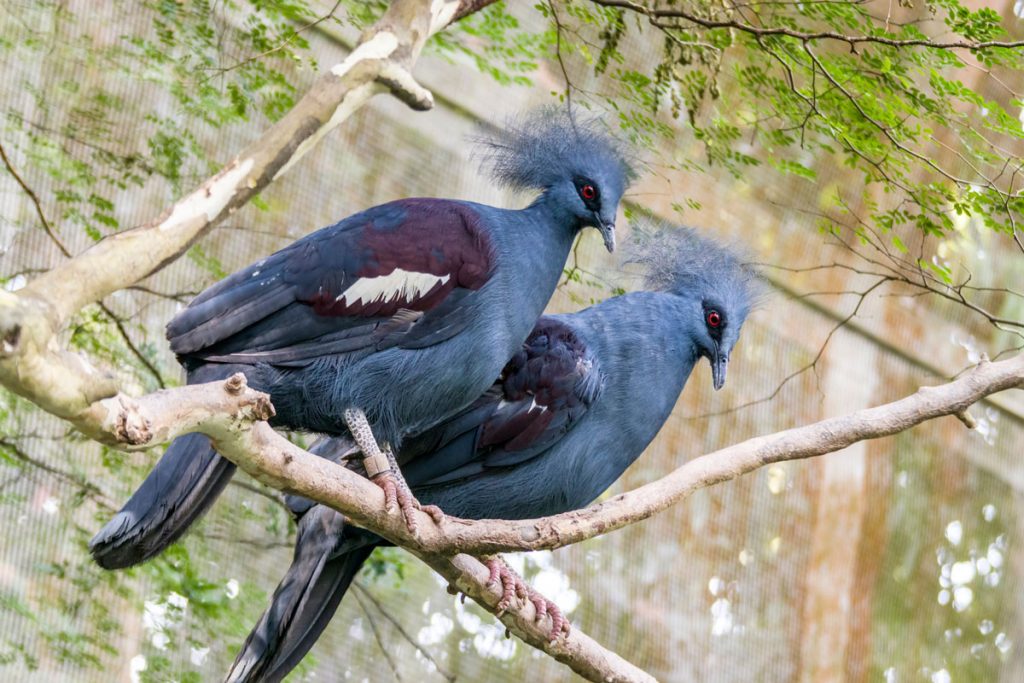 The crowned pigeons only remain in remote areas as they are highly coveted for their magnificent plumes. Alas, the birds are also vulnerable due to habitat loss and overhunting. 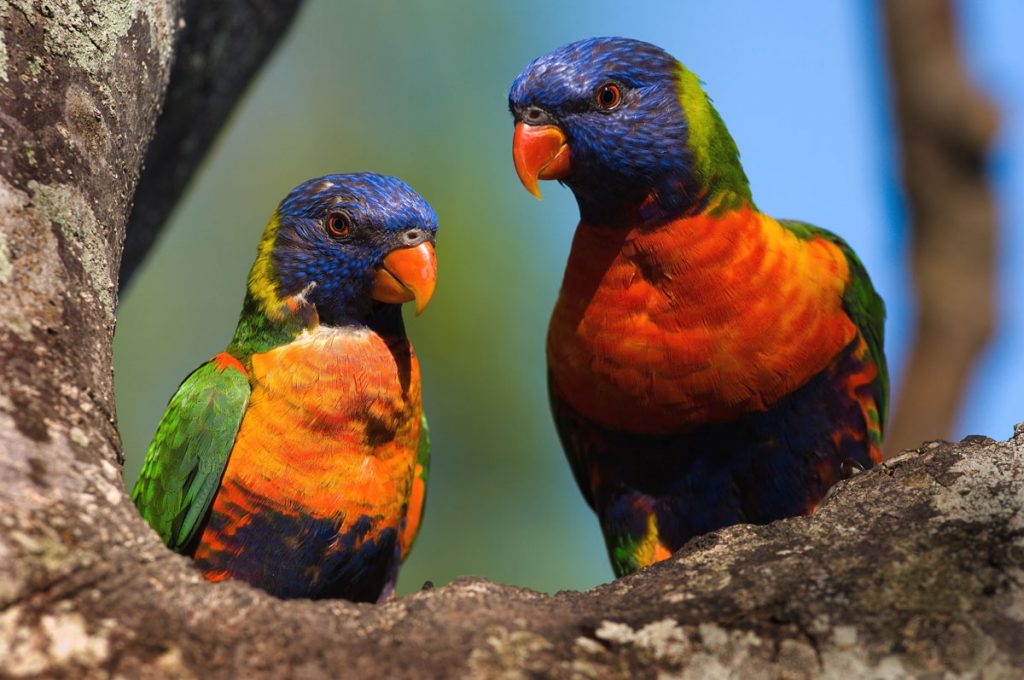 The black-winged lory is a long-tailed, medium-sized bird with a glaring bright red plume and pair of fierce red eyes, complemented with an orange red bill, blue cheek, and violet ear patches. One can find the species roosting in coconut trees and frequenting forest areas in Geelvink Bay, Western New Guinea. Unfortunately, the black-winged lory is on the verge of extinction due to the destruction of its habitat and hunting.

While wildlife tourism can spark interest in traversing these uncharted territories, it paves way for increased infrastructure developments, particularly on rainforests and mangrove forests, that can cause significant disturbances to animals in their natural habitats. In addition, wildlife viewing, if done in massive crowds, can frighten away animals, disrupt their feeding and nesting sites, or overwhelm them with the presence of people.

However, if implemented rightly, wildlife tourism can continue to provide opportunities for improved livelihood for the locals and the indigenous. Similarly, guests visiting these wildlife destinations also contribute to the conservation and improvement of animal conditions and their habitat when owners of eco-accommodation or wildlife attractions implement native habitat preservation and restoration.

Raja Ampat, fortunately, maintains a sustainable ecotourism industry following the customary belief of the indigenous that nature is tantamount to a mother who nurtures and provides; therefore, it needs to be upheld and safeguarded. This belief has been practiced since ancient times, which shows that the concept of nature conservation has been followed and practiced by the local community ever since.

Forests are very much susceptible to deterioration from logging, road construction, mining, and burgeoning oil plantations, which all contribute to loss of habitat – the most widespread and most serious threat to the birds inhabiting New Guinea’s forests Apart from habitat loss, overhunting also poses a threat for birds of paradise as collectors are engrossed in using their plumage as decoration or fashion accessory. The trade of feathers has been illegal in Indonesia for over three decades but the fowl continues to be smuggled out of Papua. Birds of paradise comprise only a fraction of the bird species jeopardized. Several Indonesian endemic birds are listed either as threatened, vulnerable, endangered, or critical on the IUCN Red List of Threatened Species.

Experiencing the grandeur of paradise with Lamima 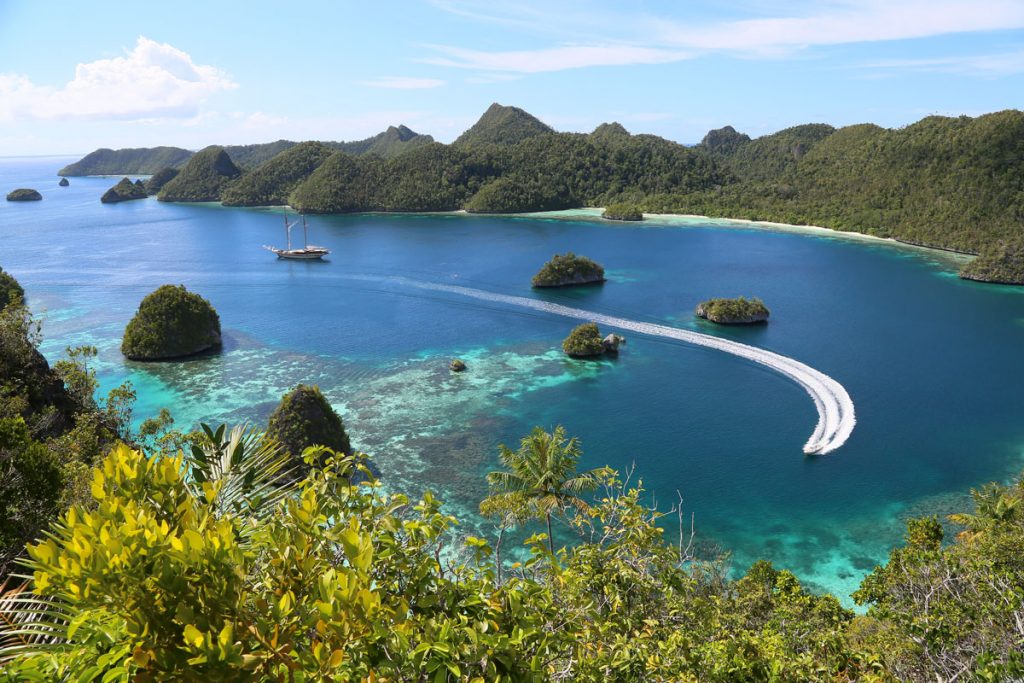 Undoubtedly a utopia for bird watchers and nature enthusiasts, the captivating display of wildlife in the West Papua region is a spectacle worth seeing. Accompanied by a warm and hospitable local crew, luxury phinisi Lamima offers an experience that allows guests to immerse in undiscovered and untouched habitats that truly reconnect one with nature.

A seven-day Raja Ampat yacht charter is recommended to fully explore and savor what the island has to offer, but any time spent on this paradise is surely worth it. Lamima offers private yacht charter in Indonesia with custom itineraries.