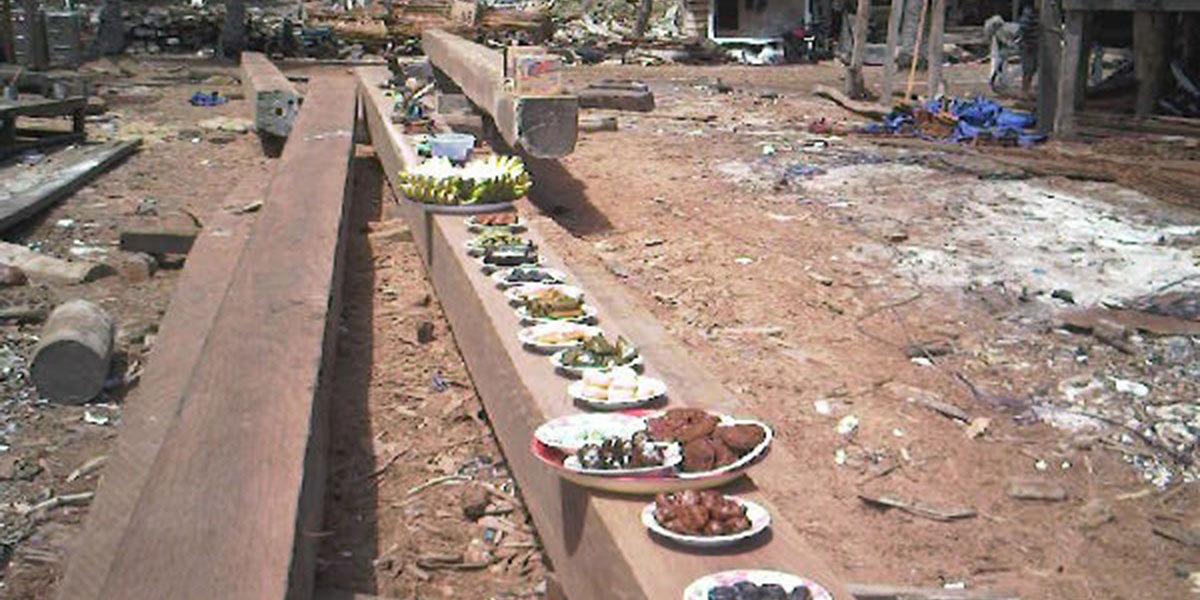 Once you have become involved with life in Bira you realise that religion is an enormously important factor in the lives of the Sulawesi people. The Muslim faith was brought into the region via merchants from India and, by incorporating Persian and Indian philosophies along the way, had mellowed by the time it arrived. Being a much less austere form than is found in the Middle East, it blended in nicely with the existing Buddhist and Hindu beliefs.

The local spiritual leader (Imam) and men like Haji Baso who have performed the haj to Mecca and kissed the black stone in Kaaba seven times, are greatly respected in the community. However, Indonesians also revere spirits. Trees, rocks, rivers, rice, ancestors and especially an essential object like a boat (prahu) all have their own life spirits. Likewise, the gods controlling the sun, rain, and other natural phenomena shape daily life just as animism and spiritualism eclipse the basic rationalism of Islam.

So, knowing this, it came as no surprise to Dominique to learn that there would be ritual ceremonies in the course ofLamima’s building process. The first to be conducted would be the keel-laying ceremony or potong lunas.

Earlier, onde–onde had been prepared and now women brought this sweet rice from their wooden huts and placed it on the keel as an offering to the spirits. Made of rice flour, palm sugar and coconut, it symbolises buoyancy (before the rice is cooked it sinks, after cooking it floats). Along the length of the heavy beams many other such dishes were laid including a special type of long banana to ensure longevity, and baje made of red rice and coconut milk, an indulgence, a symbol of enjoyment.

The ceremony started with prayers for a long life for the new vessel, a safe passage for her future crew and passengers and, once launched, a joyful return to port. 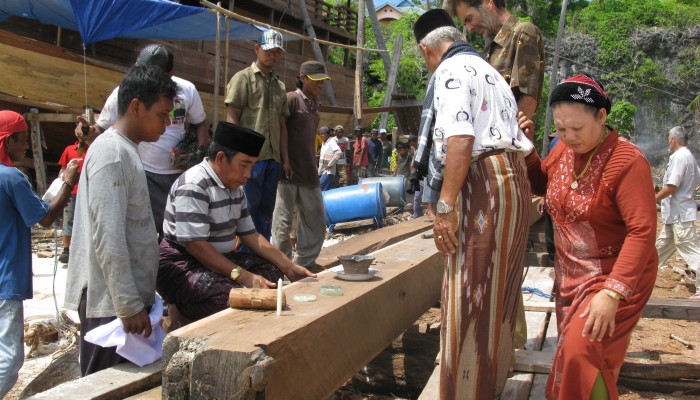 In a small ceramic pot placed on the bow section of the keel, kemayang was slowly burning. This holy incense, brought from Mecca, was to dispel evil spirits via a hole drilled in the middle of the keel. Haji Baso, his wife (ibu Haji Baso) his cousin and foreman (Haji Saka), and our project manager (Bartho Metselaar) each added a pinch of incense to the pot before a chisel was produced. 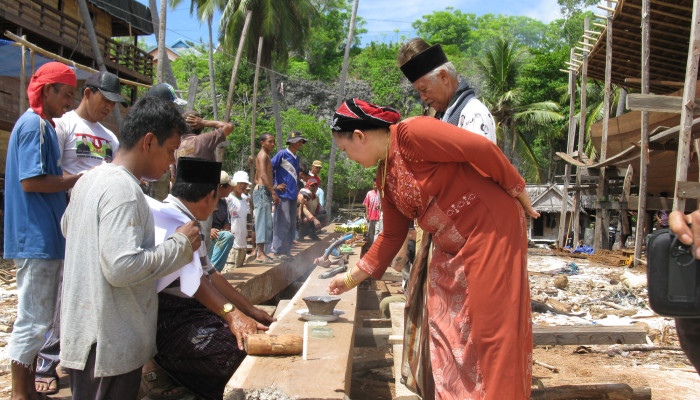 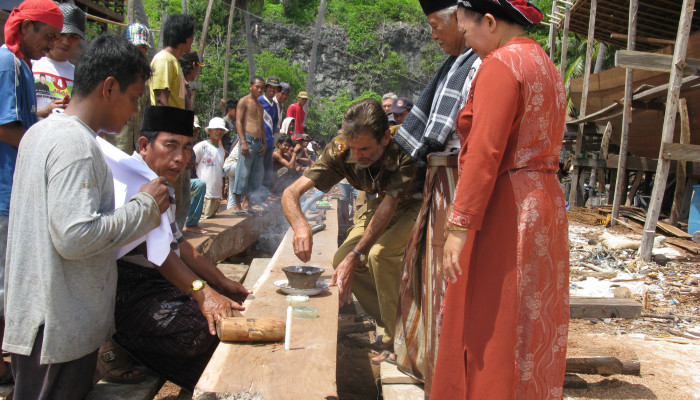 This was held in the fragrant smoke by the Imam before an incision was made in the keel into which was smeared a drop of blood from both a rooster and a hen. 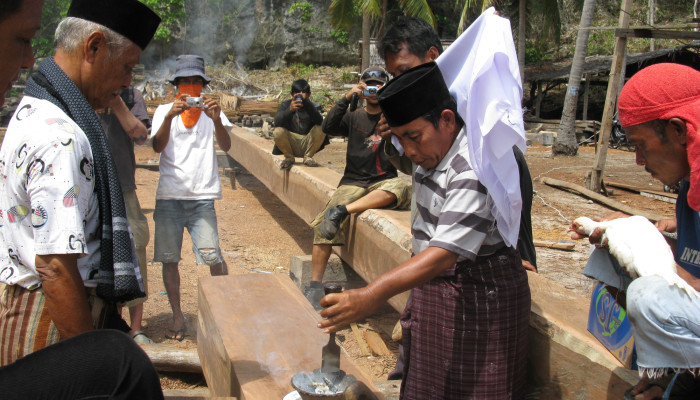 This process was then repeated on the aft section, ensuring that any remaining evil spirits were driven away.

Only then was a small bow section of the keel sawn off in one continuous clean cut and thrown into the clear turquoise water. 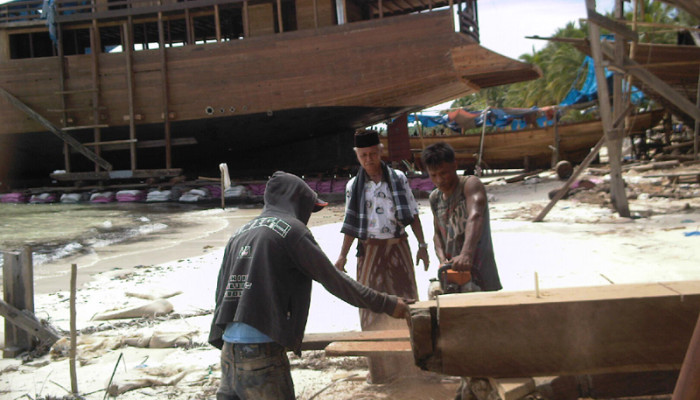 This symbolic action was to ensure that, when the time comes, Lamima’s wooden hull will be accepted by the spirits of the sea. 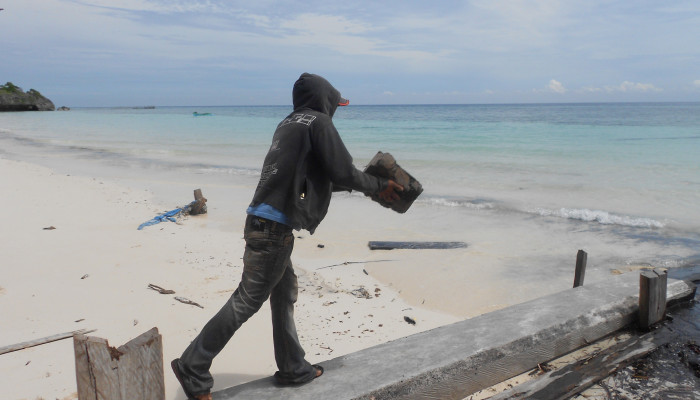