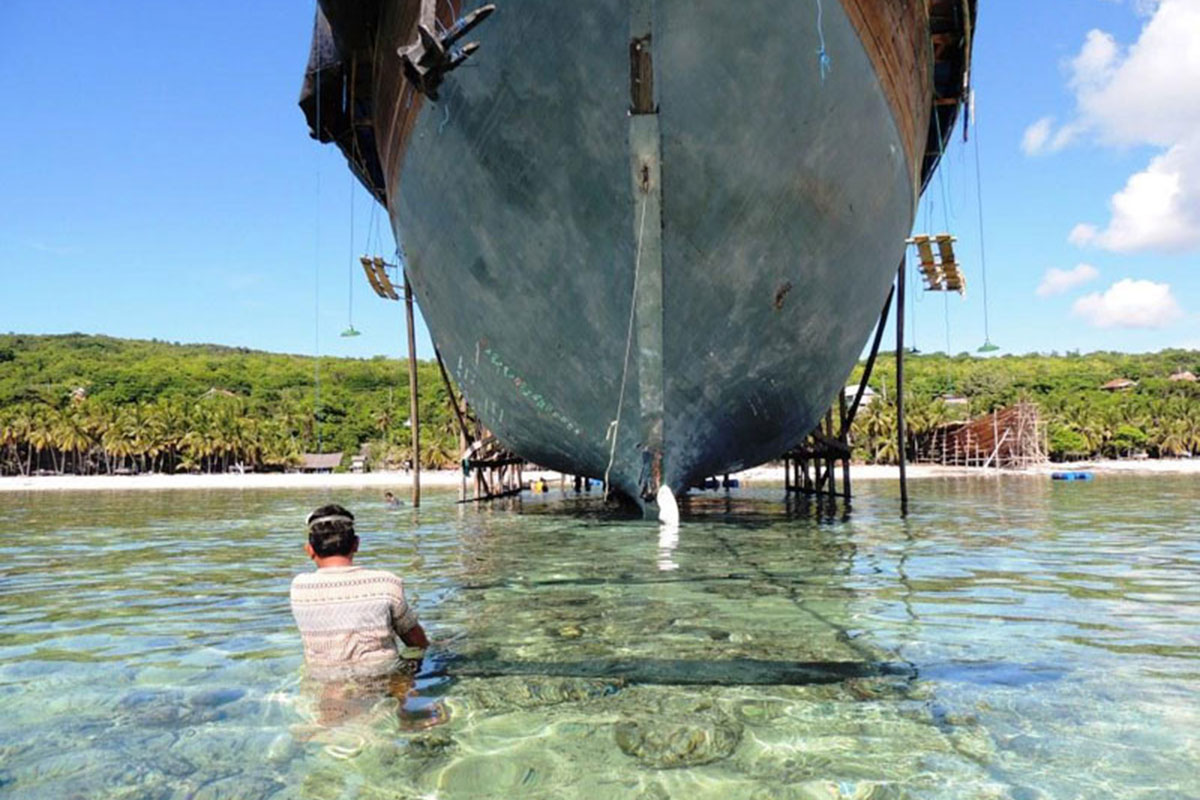 Launching from the beach

For the Konjo people (who have a strong animistic belief in spirits and life forces) an object as essential as a boat, or prahu, has its own life spirit. Consequently, its future safety, as well as the health and prosperity of those associated with it, can only be assured by working with this supernatural force.

This was the second ceremonial event in the course of Lamima’s building process – the first had been the keel-laying ceremony or potong lunas and now, just over a year later, Dominique was witnessing the launching ritual or bersanji, a ceremony essential to her strength and safety at sea.

‘Lamima will have the strength of the bull, the luck of the golden ring, and no bad spirit will dare to approach her’.

After the ritual feast Haji Baso, his foreman Haji Saka and three members of his crew gathered under the stars to perform the second ritual known as panossi, or ‘chiseling the navel’.

With his cohorts seated around him at the midpoint of the boat, the punggawa directed Haji Saka to make a small hole in the keel into which a golden ring would be inserted, an omen of good luck for all who sail aboard the vessel.

A symbolic potion was prepared, made of sawdust from the drilling of the keel, the ash of incense brought from Mecca, and water. Covering his head with a white cloth, Haji Saka gargled the mixture for a few seconds before removing the cloth and spraying it out through his teeth.

And that concluded the official rituals to protect Lamima. Tradition had been honored, the ceremony was over and the music could begin.

Haji Baso’s workers and their families gathered to make merry on the beach, celebrating to the accompaniment of a well-known traditional band from the nearby island of Selayar. A local politician also came by on that beautiful night to make a speech, congratulating Haji Baso and thanking Dominique for bringing such a large contract to the area.

Later that evening, the crew of fifty joined Haji Saka at Lamima’s stern, eager to test the equipment installed to drag her manually into deep water. Together they hauled in rhythm, gradually inching Lamima forwards – only a short distance but far enough to satisfy them that she would move without problems the next morning.

And that is where they left her, in peace under the stars – imbued with luck and the strength of the bull, protected from evil and poised to start the arduous transfer from the beach to her real element, the water.

Full of satisfaction with the day’s events, Dominique tapped the shoulder of the RINA surveyor, Asnawi, who stood by his side. ‘So, are you satisfied with the quality of Lamima’s construction?’ he asked. ‘Will you be issuing her with a full class certificate?’

The surveyor nodded, smiling at Lamima, and replied, ‘Yes’.

Timing of the launch was critical as the season of prevailing west winds was nearly over and it would not be wise to be there when the easterlies arrived – the launching zone, ideal now, would be exposed – and so the next morning the operation began in earnest

To hold Lamima upright and stable, two vertical beams or “chicken legs” had been installed, one on each side of the hull, supporting her in a type of sledge. Ten meters in front of her hull a massive ironwood beam lay buried in the sand perpendicular to the direction in which her 350 tons was to be pulled.

No machinery was employed – the beam served as an anchorage point for a manual pulley. Chains and ropes encircling the keel were run through blocks fixed to the ironwood beam so when the workers heaved on the pulley, Lamima would advance the intervening ten meters, at which point the beam would be moved forward another ten meters, re-buried, the pulley reassembled, and the process of hauling repeated.

Meanwhile, to reduce the friction of her passage, a level slipway was constructed of sand bags, each weighing 40 kilos, which also served to stabilize her as she was eased out to deep water hour by hour, day by day.

Ultimately, it took 45 days, 50 men, 18,000 sand bags and the spring tide of a full moon to float Lamima – the largest traditional boat-launch ever undertaken in Indonesia.

Once afloat, she was towed jubilantly to the small harbour of Bira. Here a pontoon was built to gain easy access for loading materials and preparing her for the next adventure – a long voyage behind a tugboat towards the next stage of her construction.

Pulling Lamima out to sea

Lamima on her way to Bira Harbour