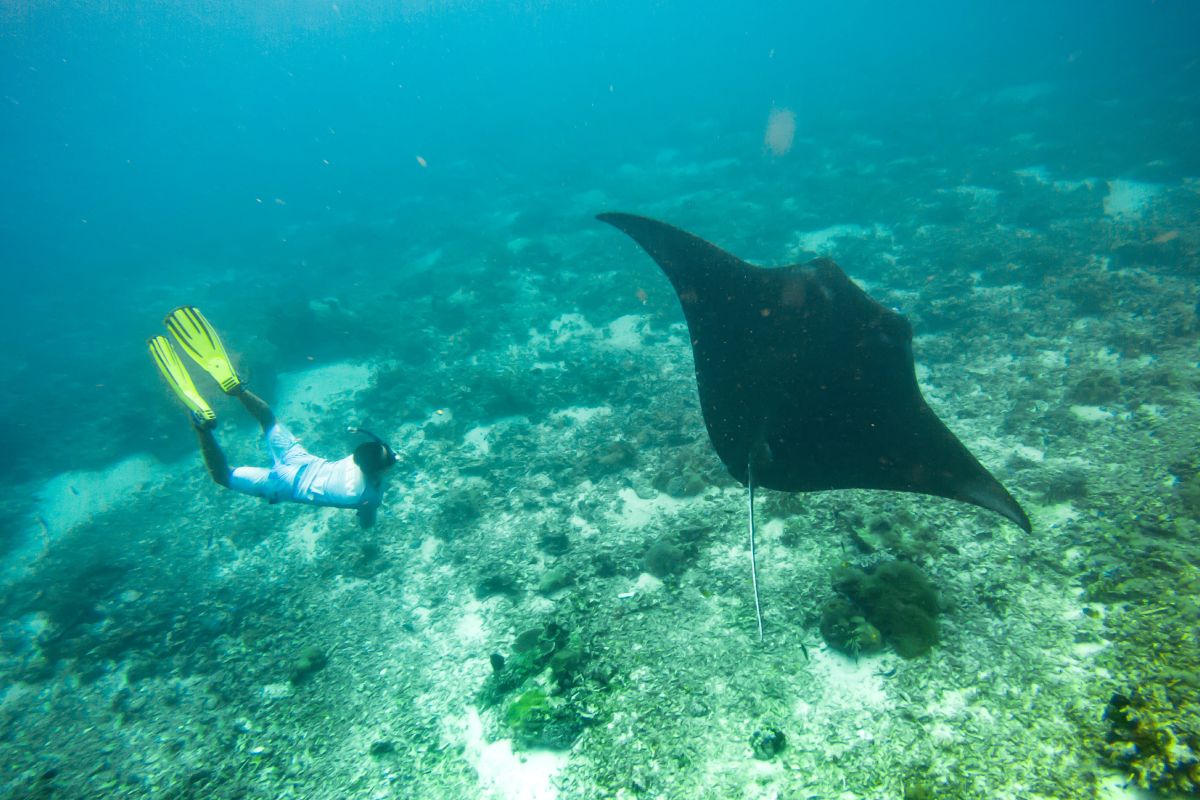 There is an undeniable sense of serenity when being in the ocean amidst sea creatures that make up for its surrealistic atmosphere.

Known to be highly intelligent and stirringly elegant, Manta Rays are considered one of the finest and most gentle giant creatures in the ocean. Their distinct diamond-shaped body with drawn-out triangular pectoral fins can get up to 5 to 8 meters. Their massive structure could easily intimidate, but they can most certainly capture the hearts of divers in an instant with their calm and graceful movements in the sea.

Indonesia’s rich marine life and ecosystem make a perfect haven for playful and majestic mantas. They thrive in warm waters across the globe, in both tropical and subtropical countries.

As their habitat is mostly in the open ocean and they usually undergo long migrations, there can be sightings of Manta Rays while cruising aboard Indonesia yacht charter and can sometimes be spotted on the surface of the ocean. At times, they could even be seen leaping out of the water, flapping their fins, and creating a loud splash upon diving back in the ocean. Researchers have theorized this behavior as a way of removing parasites or escaping predators.

Manta Rays breathe and live through swimming and constant movement, allowing for a graceful display of an oceanic dance. They are curious and sociable ocean creatures and are not ones to shy away from divers. Manta Rays are gentle and completely harmless and are usually threatened by commercial fishing and careless divers.

Known by their large mouths and prominent horn-shaped fins extending from the sides of their head, also identified as “devil rays”, a label that describes the opposite of their gentle characteristic. Apart from their gentleness and gracefulness, they are also considered as one of the most intelligent sea creatures. Among any cold-blooded fish, Manta Rays have the largest brain-to-size ratio and have abilities that indicate high cognitive function and highly developed long-term memory.

Though Manta Rays are classified as part of the shark family and are often confused with stingray, another type of ray whose barb is venomous and deadly, it is essential to know that they are safe and not dangerous. Unlike the other rays, mantas do not have a venomous spine on its tail bases.

Apart from the open ocean, mantas can also be found visiting productive coastlines and reef areas that are abundant of planktons. Despite their massive size, Manta Rays feed on mostly planktonic organisms like euphausiids, copepods, mysid shrimp, and decapod larvae.

Steadily gliding through the water as they feed, they use their protruding flaps, known as cephalic lobes, to create a funnel that directs water and their prey into its mouth which is sifted through rows of tiny rakes called gill plates.

As one of the most intelligent creatures in the ocean, they make use of various creative techniques when feeding. Mantas can be seen doing repeated somersaults or barrel rolling in areas rich with zooplanktons or chain-feeding with other mantas, creating a cyclone effect that traps food in a spiral, allowing them to maximize their prey intake.

They are often sighted by divers at close range at coral reefs as they make regular visits to cleaning stations where they are rid off parasites and dead skin. Though Manta Rays are known as solitary sea creatures, they can be found interacting during feeding and cleaning and are said to return to the same cleaning station. 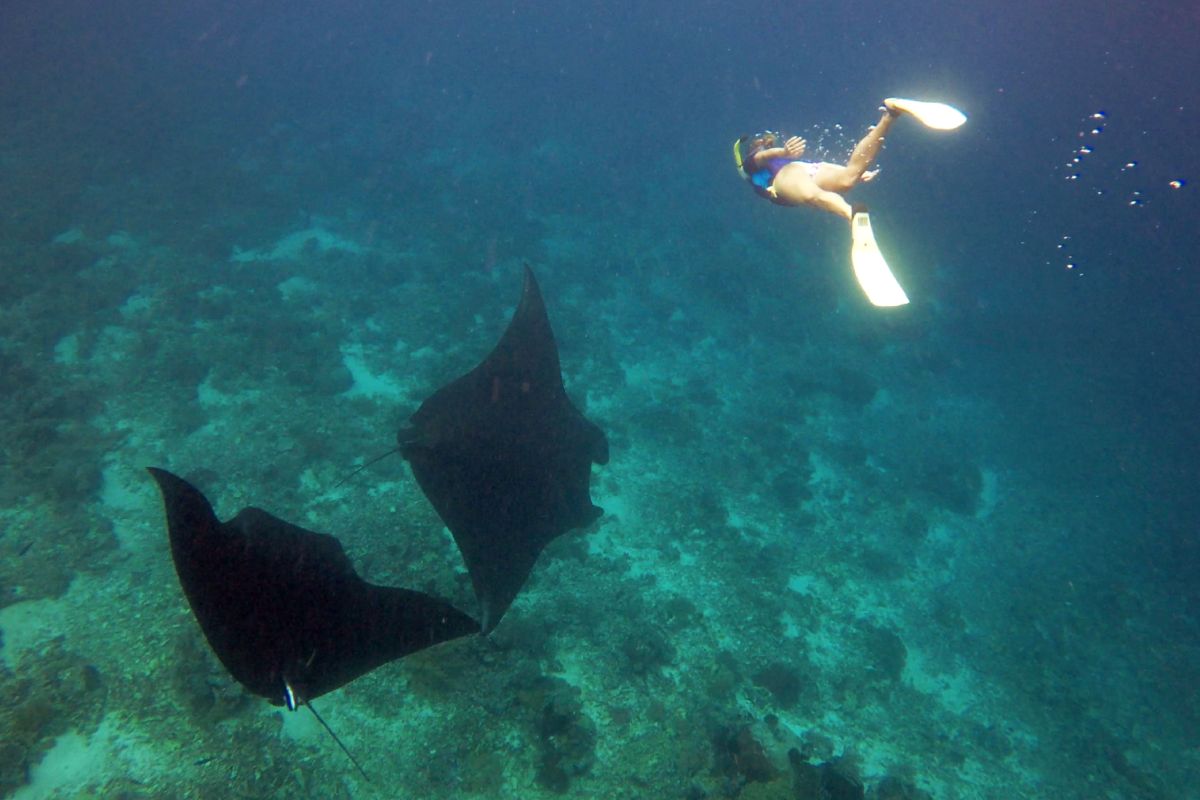 Indonesia’s rich marine life makes it a perfect destination for manta ray sightings in the wild.

A diving spot of choice for manta ray sightings, also known as Makassar Reef, colorful tropical fishes like eagle rays and bumphead parrotfish can be enjoyed in their natural habitat. Also a home to the rare Komodo dragon, a monitor lizard only found in Komodo National Park in Indonesia.

A biological hot spot with abundant wildlife and scenic landscape, Raja Ampat offers exceptional nature experience that includes diving and snorkeling. A spot named “Manta Ridge”, located at the central part of the Raja Ampat archipelago could showcase up to 30 mantas on a diving trip. Though underwater current can be very strong, this does not discourage avid divers from relishing the vast array of aquatic life which includes giant clams, parrotfish, schools of barracuda, pygmy seahorses and multicolored nudibranchs.

Recognized for its lush ocean life, manta rays can often be seen in groups for cleaning and feeding on reef areas close to the surface. The Manta Point easily becomes a favored spot as marine wildlife could range from octopodes, nurse sharks, moray eels, and porcelain crabs, often roaming in groups. 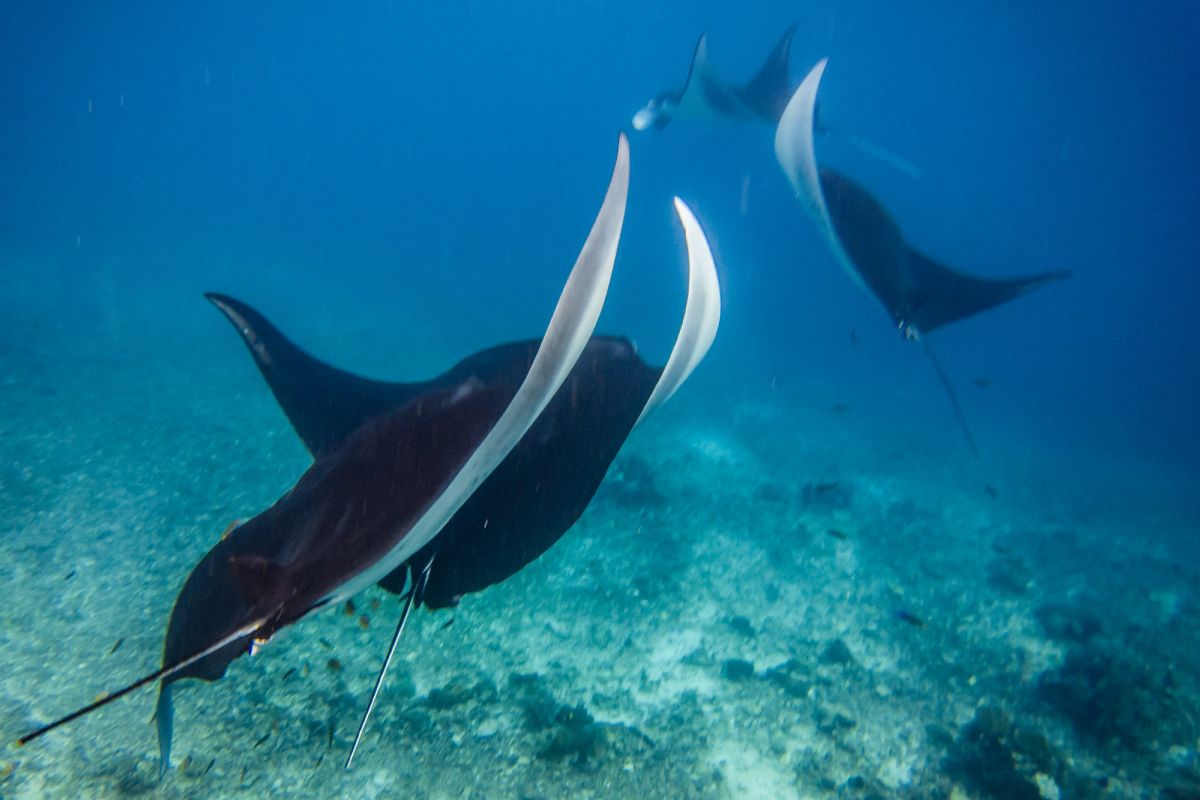 Of Mating Trains and Offspring

Mantas are declared vulnerable as they are slow in reproduction and are among the lowest fertility of all elasmobranch, a subclass of cartilaginous fishes that includes sharks, rays, and skates, producing only one pup every two to five years. Female mantas are said to reach sexual maturity between 10-15 years of age and can live for over 50 years.

Though gestation is thought to last around a year, there is still not much research and documentation when it comes to their growth, development, and parental care. There had not been any records of manta ray births but researchers have conjectured pups being born at night. Once born, the pup can survive without parental care.

Courtship and mating is a ritual and process in itself. When a sexually mature female is ready to mate, several male mantas, sometimes reaching over 30, will chase and follow the female, eventually forming what is called a “mating train”. The female subjects the male mantas to a test of commitment through a complex and prolonged race that can last for weeks. The male who will be stuck the longest will be chosen as her mate.

The mating process is rather quick and done in only a few seconds. The pair swims upward towards the surface of the water with their bellies attached and drops toward the bottom of the ocean. This process leaves mating scars on the female as the male bites her pectoral fin to secure them together. 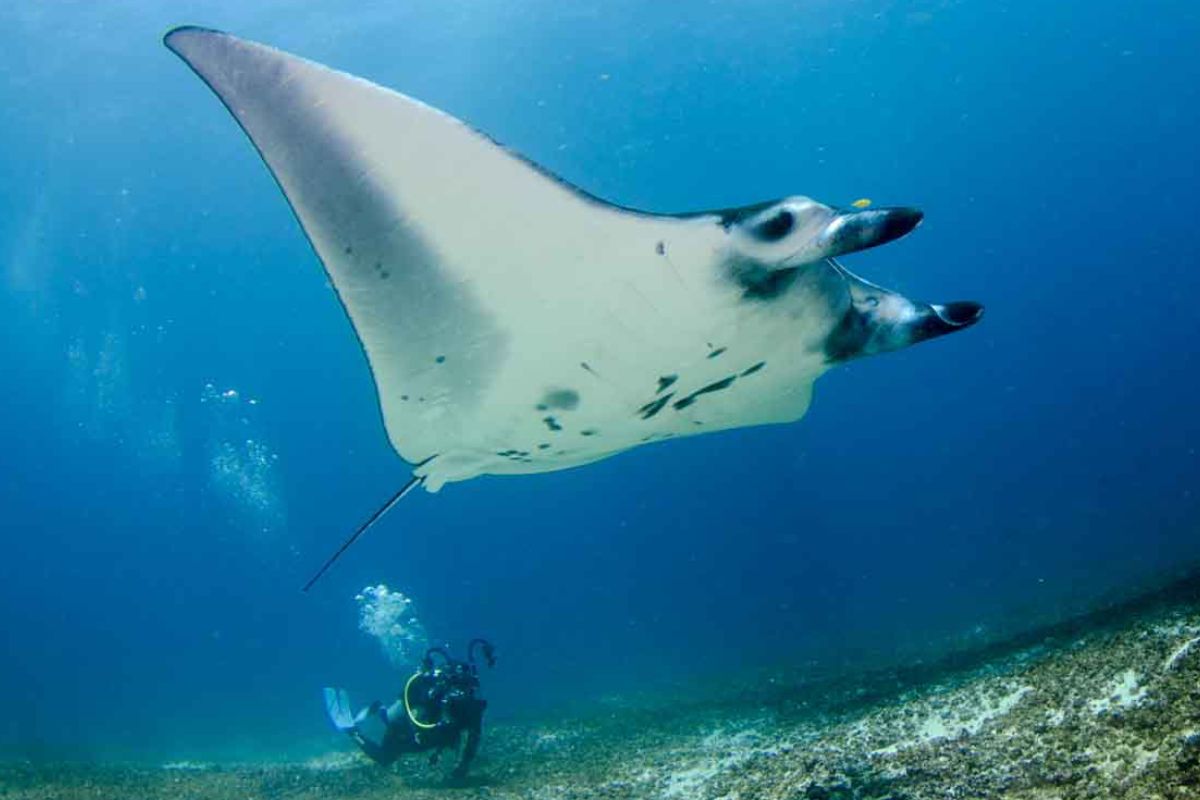 Despite being protected by law, mantas are still classified vulnerable as they are still being hunted in some countries and caught as bycatch in commercial fishing. With their slow reproduction and long lifespan, it becomes difficult for the population to catch up on the rate of its fishing.

The gills of mantas and mobulas are also harvested for international trade as the demand for it increases and the sightings continuously decline at alarming rates. Despite the lack of scientific evidence, the gill plates are used for Chinese medicine to help increase blood circulation and aid in common diseases. Some consider it a delicacy and sometimes used as an alternative for shark’s fin.

Manta Rays have been protected by an international treaty on migratory animals and forbid the trade of manta products. Indonesia, known to be the sanctuary of most of the world’s manta rays, has banned fishing and trade in 2014 for reasons that swimming with rays as a tourism activity can generate more revenue than when it is traded. Private yacht charter in Indonesia for one is an experience best enjoyed with sightings of mantas in the wild.

Most of manta rays’ cleaning stations are protected by marine conservation groups or tourism operators. Mantas in the open ocean are more likely to be threatened than those in reef areas. 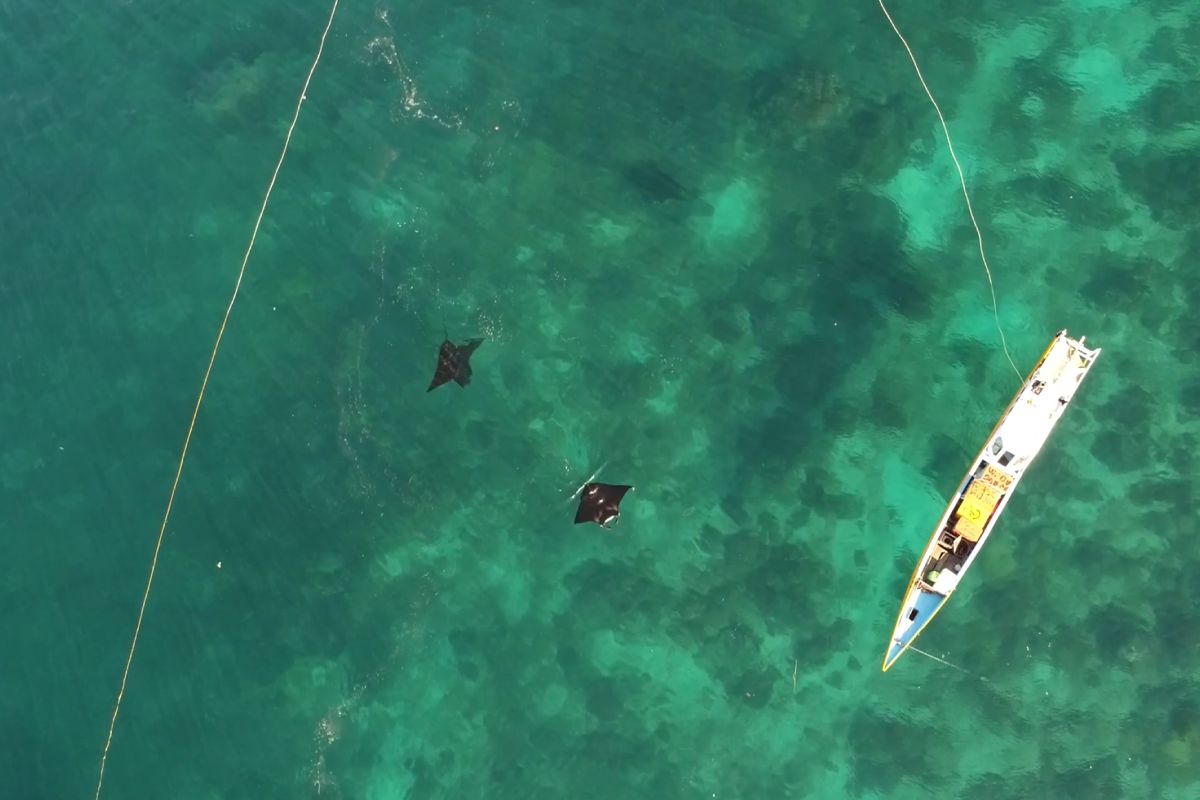 Witnessing a manta up close in its natural habitat can be a deeply stirring experience. With such an immense size and impressively tender characteristic, it is easy for one to be overwhelmingly amused. Mantas are innately gentle and playful sea creatures and cannot do harm despite their intimidating size.

As gentle creatures, they can easily be exploited by careless divers and fishing methods, both artisanal and commercial fishing. When going in the wild to see mantas, one must be conscious of considerate practices that respect the nature of these gentle giants. Mantas are not to be touched as this could affect the protective mucus covering their bodies. It is also advised that one moves gently so as not to startle them and keep them in their calm nature.

When a creature feels safe in a space, it would be comfortable to express their distinctive characteristics and spirit. Curious in nature, mantas are most likely to swim close and around divers while flipping and gliding as if dancing.

When viewing marine life in the wild, one has to be responsible and keep a safe distance so as not to disrupt the natural environment that could potentially harm marine life.