Meeting the Hammerhead: A Dream Encounter

Indonesia’s distinct charm carries an immense pull that can strike one in awe in every visit.

Countless reasons, from history and adventure, luxury travel, and marine biodiversity, why this Southeast Asian archipelago has become a destination that needs to be experienced more than once. An experienced divers heaven, Indonesia’s collection of aquatic life, especially off the eastern Banda Sea in Maluku islands, is a must-see.

Divers have their eyes set on the unexplored Banda Islands, a group of volcanic islets that offer front-row seats to the spectacular schools of migrating hammerhead sharks. Sailing on a luxury yacht charter is the best way to explore the remote Banda Sea and dive with these impressive ocean beings. Heading out to a very special trip across Indonesia’s most isolated waters require a top-quality vessel and crew.

Nature has bestowed Indonesia numerous marvels and Lamima’s mission is to craft a unique, personalized experience according to your taste and needs.

An adventure awaits in Banda

A gold mine of sought-after spices in the past, the Banda Sea in Eastern Indonesia continues to beguile modern-day explorers for its incomparable diving sites. Wedged between the world-famous Papua and Java islands, Banda is one of Indonesia’s best-kept secrets. Aboard the luxury sailing yacht Lamima, divers can access the secluded Banda, Seram, Ambon, Wetar, Kai, and Aru Islands.

An exhilarating exploit looms thrill-seekers, most especially divers, once they lay their eyes on the stunning plethora of marine life beneath Banda’s surface. Its clear waters set an idyllic stage to feature an arresting coral reef collection. Huge, mile-long seamounts add to the exceptional Banda underwater experience that is teeming with an astounding assembly of marine life. Gunung Api, an active water volcano, also offers a distinct diving activity where sea snakes will usually accompany your exploration.

Naturally, pelagic sea creatures are also part of the show, including barracudas, tunas, turtles, whales, and reef sharks. But among these critters, one is undoubtedly the star — a standout for its unusual, scalloped snout — the hammerhead shark. 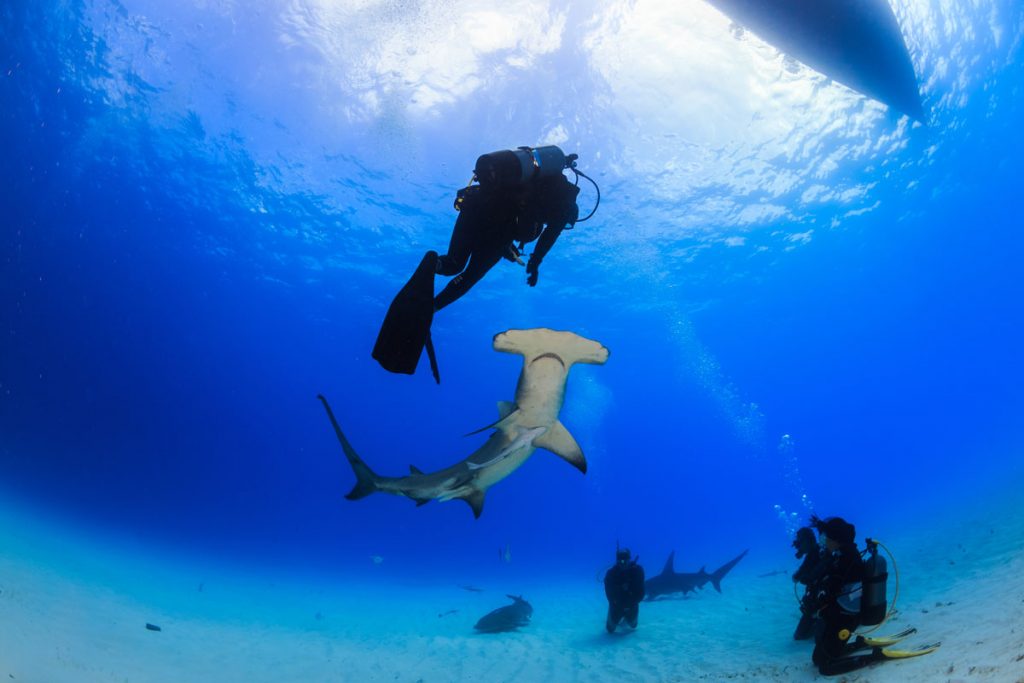 Hammerhead sharks are aggressive predators renowned for their flattened heads known as cephalofoil that allow heightened sensory reception capabilities. They typically reach up to 20 feet in length and can weigh from 500 to 1,000 pounds. These highly receptive animals can easily detect and outwit their prey’s game. Hammerheads usually devour fish, squid, and crustaceans, but they are most excited about stingrays, which they pin down and trap to the ocean floor.

Hammerhead sharks also have the unique ability to move their heads in an up-and-down motion through a special muscle, adding to their agility and strength. These carnivores are often found in tropical areas and would normally migrate to cooler waters during the summer. 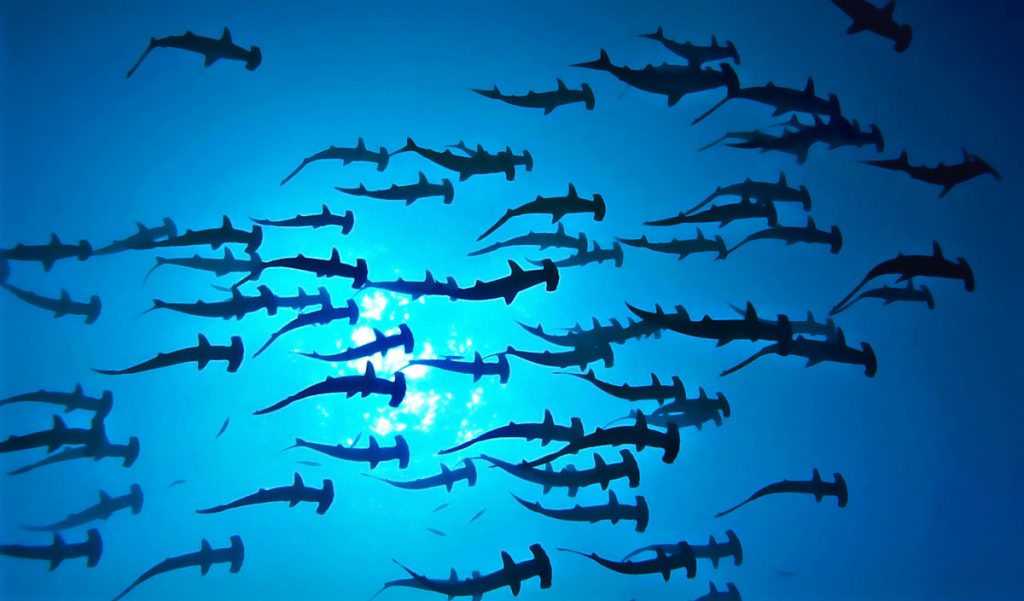 Schools of hammerhead sharks are typically spotted within Malpelo Island in Colombia, Galapagos Islands off Ecuador, and Cocos Island in Costa Rica. However, hammerhead sightings in the Banda area have been more prevalent in recent years. Run Island or Pulau Ai famed for its splendid reefs — one of the best in Banda — is also hailed as “Hammerhead Point”. The Banda waters lie along the migratory path of the hammerheads in October and November, marking this period as a special season for divers.

Though brute and formidable against their prey, hammerheads are generally quiet creatures who would rather keep to themselves. By day, they travel together in schools, but at night they prefer to hunt alone. They could pick up the slightest noise and movement, so divers would often require the help of trained guides who are familiar with local currents and seasons.

Onboard Lamima to meet the hammerheads 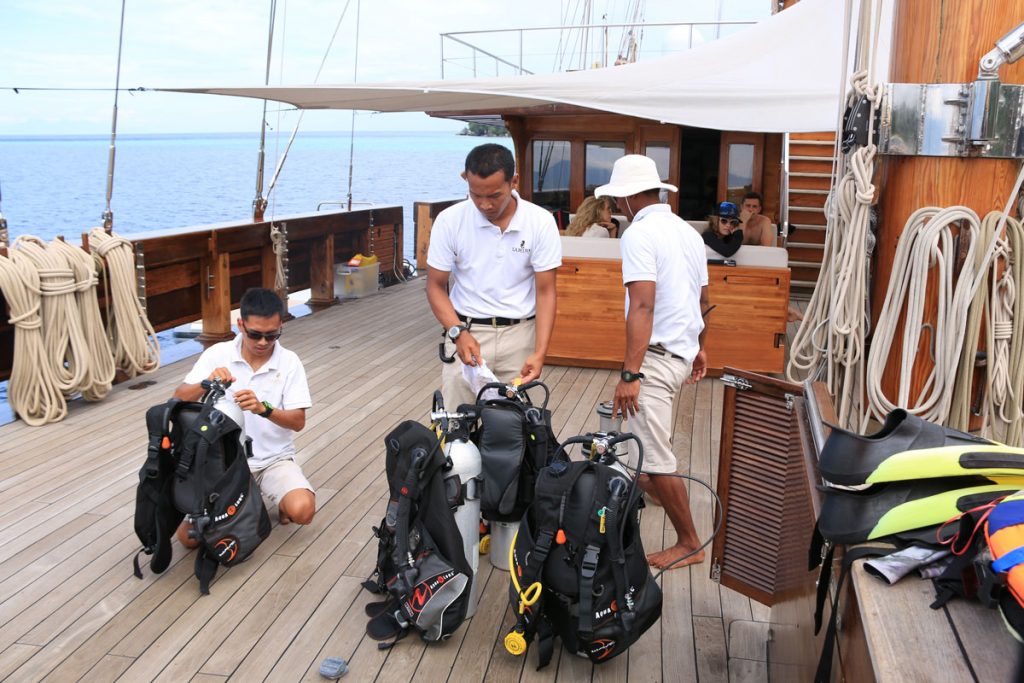 Ask any trained diver about their bucket list, and you can bet that diving with a school of hammerhead sharks is on that list. During mating season in October and November, divers head to Banda Islands, near Run Island for an encounter to remember. The effort and patience required in waiting is nothing compared to the breathtaking sight of a big school of hammerhead sharks. Flipping diving fins and swimming alongside thirty or so of these magnificent creatures is a fantasy realized. To those who are determined to come face-to-face with these reticent giants, the long wait is often rewarded with waves of awe.

Cruising along the expansive Banda seas in nothing less than a Lamima yacht charter offers a full-on luxury expedition. Stopping by Run Islands, coming from Ambon, and en route to Raja Ampat is a perfect detour for a one or two-week sailing adventure. Guests who wish to dive with the hammerheads will require certification.

Truly, a school of hammerheads elegantly swimming in a fluid motion is a sight to behold. Sail with us and let Lamima provide you with a diving experience you won’t get anywhere else.