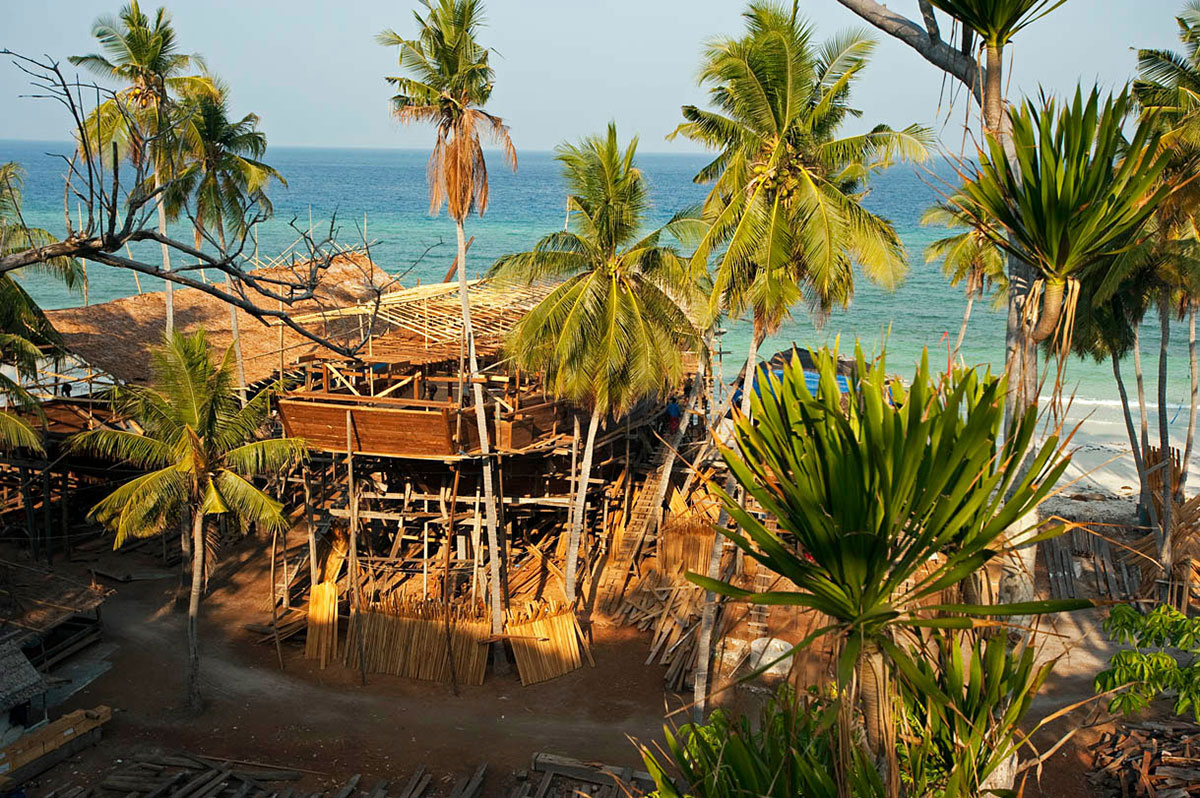 In the course of 2012, Dominique visited Bira frequently and had watched with fascination as Lamima took shape. Like him, I have lived her, breathed her, monitored every inch of her progress since her inception but, due to the demands of other aspects of the project, my yearning to rendezvous with her had remained a dream.

But at last the chance arose and we met in Makassar, the provincial capital of South Sulawesi. I arrived in the late afternoon and every sight and smell reminded me that this port has for centuries been a collection point for the exotic goods of the East and the gateway to Indonesia’s famed “Spice Islands”.

We left Makassar after a quick early-morning breakfast. The taxi was old but spacious so we settled in comfortably for the six hour trip to Tanjung (cape) Bira on the peninsula’s southeastern coast.

Although it was only about 175 kilometres to the boatyard, the heavy traffic and poor road conditions made the going slow. In Indonesia life seems to happen alongside the main roads – locals gather to trade goods and livestock, to socialise with friends, to stroll, to chat, to select snacks from any of the scores of teashops and mobile food stalls, or simply to enjoy the variety of cars, taxis, scooters and busses passing noisily along the bumpy road. Traffic was particularly heavy on the outskirts of the many settlements we traversed and only the last 20km of our route took us through a more pleasantly rural and scenic landscape.

Arriving in Bira after the long, hectic taxi trip, I felt as if I had arrived in paradise. The road had left the open fields and rice paddies and was now running along the top of a cliff. The beach below was obscured by swaying palm fronds but across their tops we could catch glimpses of the tantalising turquoise sea and I knew we had arrived. Peering through a clearing down to the shore as we passed Panrang Luhu, I found myself viewing a vessel under construction – and, even from so high above, I knew immediately it was Lamima. Asking our driver to stop, we went to the cliff edge and I feasted my eyes. The beach location was superb but it was her sheer size that made me blink, strangely unprepared for the way she dwarfed everything in her vicinity. Returning to the taxi we urged him to take us down to the beach – I wanted to be closer, to see more, to touch her planking, to walk on her deck, to confirm for myself that she was really so magnificent.

Leaving the taxi we made our way through Haji Baso’s shipyard and gazed up at Lamima. The first thought to come to my mind was “Noah’s Ark”, inspired perhaps by the gentle waves lapping against her keel and the way she rose up from the white sandy beach.

Perhaps it was my imagination but I could swear she was oozing impatience to be afloat, longing to set sail across the inviting waters stretching beyond her bowsprit. 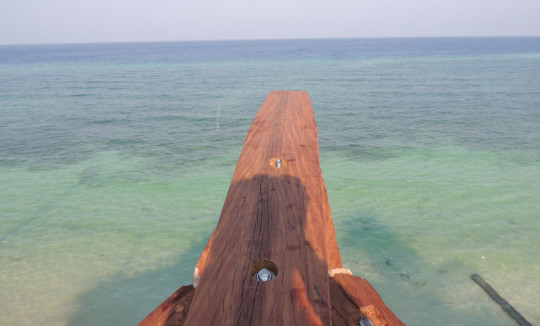 The dimensions of a typical Bugis phinisi schooner would be about eight meters wide and thirty four meters long. Lamima measures twice that but only after climbing her gangplank and stepping onto her deck did I realise the massive volume and space her hull encompasses.

The dimensions I knew by heart from her plans suddenly translated into a vessel far more impressive than I had anticipated. Her draft is such that, from the main deck looking down, people on the beach appeared as mere specks. 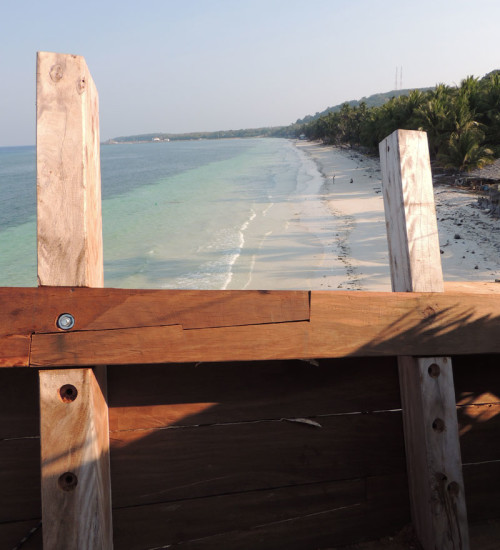 My next pleasure was in meeting Haji Baso’s workers who gave me a warm welcome. These boat craftsmen do not have special engineering training. They don’t need complicated designs or technical calculations to determine the quantity of materials needed to build a vessel. Their skills and workmanship is admirable, the traditional ways having been passed down for generations from fathers to sons – and further honed through daily practice. 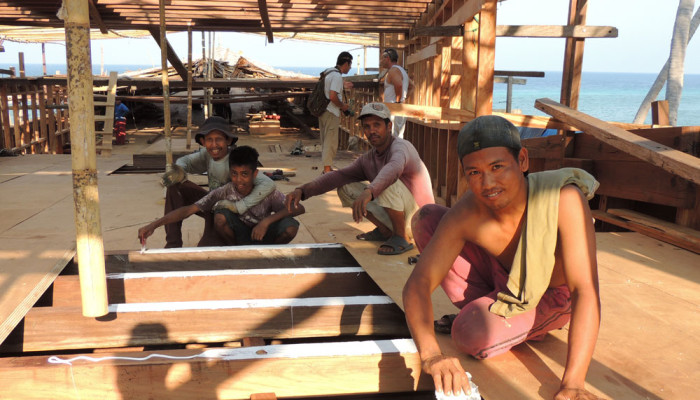 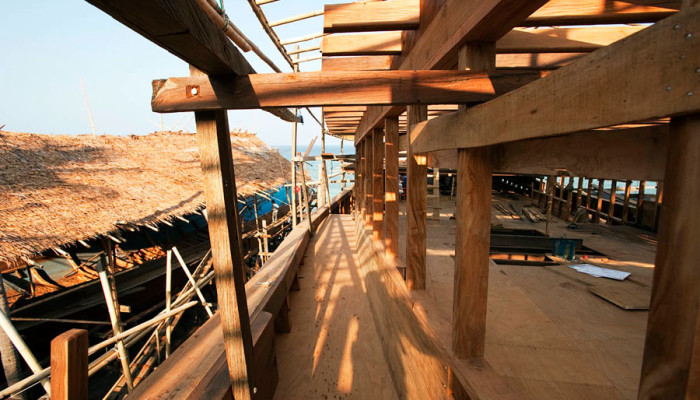 This view is of the port side gangway. The adjacent structure will become the master cabin, a luxurious and large stateroom (usually allocated to VIP guests) situated on the aft quarter of the main deck.

Lamima’s lower deck… soon to be configured into six luxury ensuite guest cabins. Its capacity took my breath away.

Here the bulkheads separating the guest cabins on the lower deck level are being installed. Each worker knows exactly what to do. The expertise with which they craft wood is in their blood, instinctive.

Selecting teak for the bulkheads: The way they build In Bira bears no comparison to the noise and clamour of modern European shipbuilding yards; there’s no discord from clanging machinery and shouted orders. Instead there’s the soft rustle of wind in the palms, the soothing lap of water on sand and the laughter of children – and we saw for ourselves that the results are splendid, the quality of the vessel superb.

Dominique and members of the team from Ara posing in Haji Baso’s boatyard. 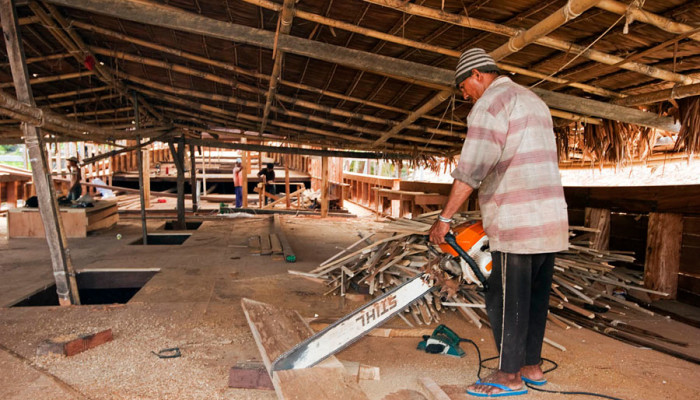 Until more recent times, the craftsmen from Ara used only simple hand-tools to execute designs passed down through the centuries but some basic changes have taken place in the last decade. A ‘culture’ in its true sense isn’t static but must adapt to the needs and requirements of its members. The chainsaw is now a commonly used tool in boat building.

After a day spent marvelling at Lamima and discussing her various features with the team who are building her, we left the busy boatyard for our hotel in Bira.

We want to express our gratitude and thanks to Zafer Kizilkaya who joined me on the trip and took some of the amazing photos above.