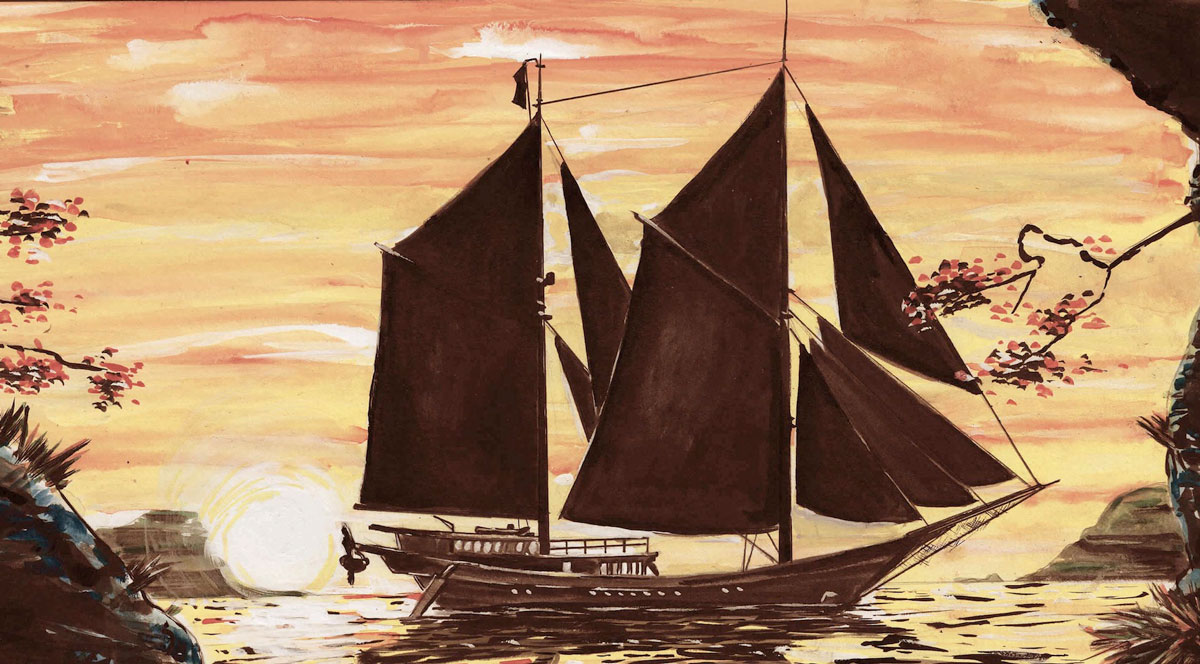 Sailing through East Indonesia’s stunning islands on a grand Phinisi is a sweeping experience that one simply cannot miss. With its massive sails and intricate details, it is bound to transport anyone to a time in history where explorers take on epic adventures in pursuit of discoveries beyond their imagination. Built upon traditions handed down through generations, constructing the Phinisi blends the Indonesian boat builders’ exceptional craftsmanship and respect for nature. Today, this vessel continues to bring wonders to passengers who wish to experience the gallant and exciting lives of the Bugis people—the Phinisi’s original sailors. 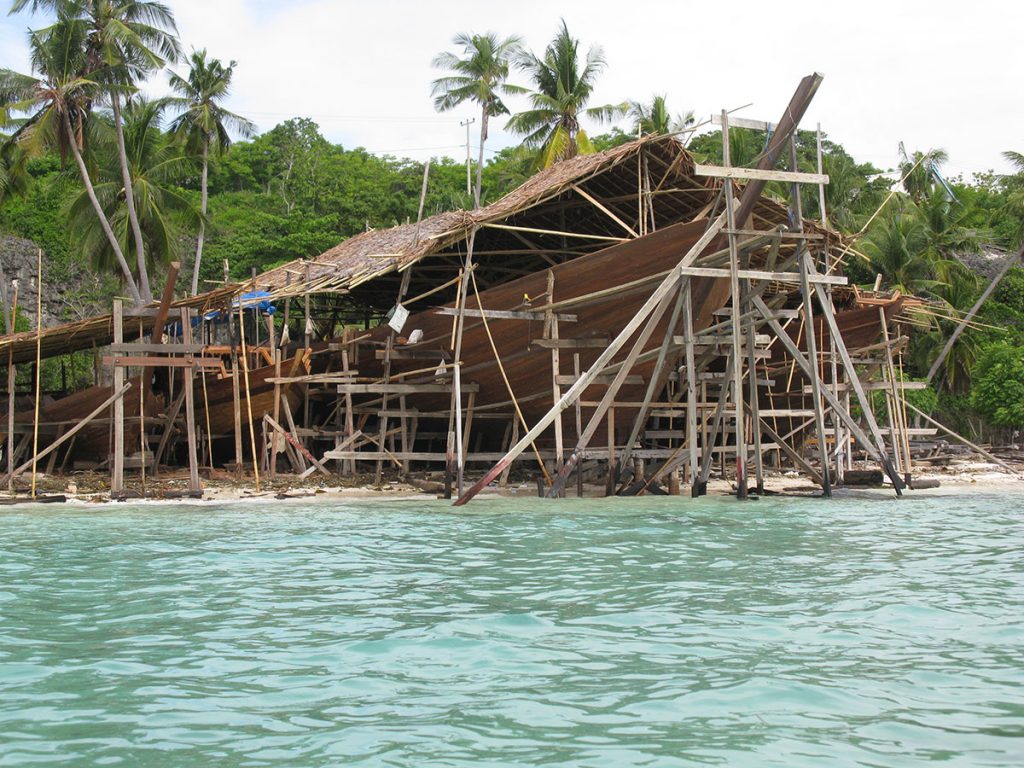 The magnificent Phinisi, a symbol of Indonesia’s seafaring heritage, has been sailing along the Southeast Asian archipelago since the 14th century. These enormous ships often made from tropical hardwood were utilized for both transportation and trade, with routes as far as Malacca, Burma, Vietnam, and Australia. The Bugis ethnic group of South Sulawesi, particularly the Konjo people of Ara were known as Phinisi master builders.

A two-masted sailing ship, a Phinisi is usually 20 to 35 meters long with masts towering up to 30 meters and weighs 350 tons. The term “Phinisi” refers to the ship’s gaff-ketch rig type, oftentimes called a seven-sail schooner, for its Dutch-inspired design, which was further adapted to asian building techniques. Its large mainsails and masts forming a tripod shape create a distinctive quality compared to other western boats. Presently, boatbuilding is primarily concentrated in the areas of Tana Beru and Bira, Bulukumba Regency in South Sulawesi.

Phinisi construction has long been a revered tradition that has been passed down from fathers to sons among the South Sulawesi generations. For the Konjo people, building a Phinisi is a process of combined precision, technique, and faithfulness to established ceremonies. The construction period commences with the ritual of identifying which tree they will use as lumber for the keel, the ship’s bottom-most part, which literally translates to “soul of the boat” in their language. This practice highlights the Konjo people’s respect towards nature as the ceremony involves communicating with the tree and asking its permission to be cut down.

Oceans of Wealth and Breakthroughs

As the world’s largest archipelago with over 17,500 islands, Indonesia has developed unique maritime traditions that have endured until now, influencing tourism and offering an incomparable nautical experience to travelers. Its open seas have witnessed the country’s development through acting as a thoroughfare for communication and commerce. Up to this day, one can still marvel at a Phinisi sailing to transport goods or anchoring by the Sunda Kelapa dock in Jakarta and Ujung wharf in Surabaya.

The world’s vast oceans have made great maritime civilizations rise, establish their own seafaring traditions, and set the tone for the modern world’s economic trading and navigational system. The Polynesians of Oceania are said to have been the open oceans’ first navigators. With the stars, sun, and ocean currents as their guide, they made it through Hawaii, Easter Island, and New Zealand.

In the 16th century, the Dutch successfully reached Asia through Cape of Good Hope, the same route founded by the Portuguese, and began their spice trade in the East Indies that consists of what is now Indonesia. They established the Dutch East India Company to oversee their lucrative business in Asia, and by the 1700, the enterprise grew to be the greatest commercial company in the world. Built for warfare and trade, and weighing from five hundred to a thousand tons, the Dutch vessels were colossal and overpowered the combined Spanish and Portuguese fleets. With their growing naval and economic power, the Dutch expanded politically and eventually imposed their power by taking over Malacca and almost the whole of Java. Inevitably, the Dutch monopoly and maritime expertise heavily influenced the seafaring Indonesians and their marine ships, evident in the Phinisi’s complex build, combining western charm and eastern techniques. With its archipelagic features, the Indonesian islands has truly been a coveted destination for trading and discovery that up until today attracts explorers who dream of revisiting history through the Phinisi.

The Bugis and Konjos: Seafaring Masters and Boatbuilders 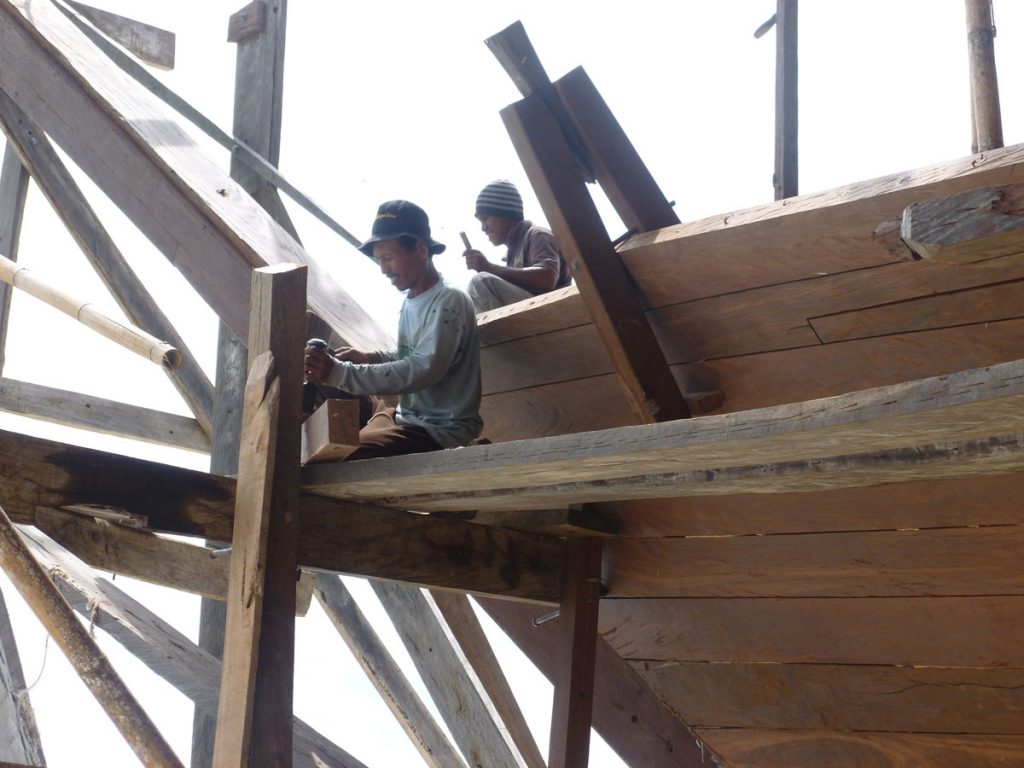 The “Vikings of Southeast Asia.” The Bugis people of South Sulawesi earned such title for being major traders and courageous sailors since the 16th century. These fearless wanderers have journeyed into Indonesia, then from Singapore to New Guinea, and from the southern Philippines to northwestern Australia. Some identify the Bugis as pirates who were known to have traded spices and incense through sailing on their masterfully built Phinisi ships. They became legendary warriors and exporters in the region through their voyages in the Straits of Malacca.

At present, the Bugis people reside in coastal and lush lowlands and work as rice farmers, fishermen or traders. Most of them converted from Animism to Islam but kept their customary traditions such as upholding the Siri concept that represents dignity, honor, or courtesy. These values continue to stand at the center of the Bugis people’s daily lives today.

Residing similarly in South Sulawesi, mostly at the Bulukumba Regency, are the Konjos—the skillful Phinisi boatbuilders who have been dedicating their life in perfecting their craft. The process begins with them searching for the appropriate wood and staff to build the ship’s hull, then completed with the construction of caulking, mast, rigging and sail making. In building a Phinisi, the Konjos use wooden nails in connecting the planks forming the hull, exemplifying mastery of technique and a unique custom. Boatbuilding has been so entrenched in the Konjo people’s lives as its art, culture, and rituals have been preserved and passed down from one generation to another. Being devoted craftsmen, Konjos were customarily not allowed to cruise at sea on a Phinisi as elders feared that their tribesmen would sail off and not return, creating the possibility of losing their honored traditions. 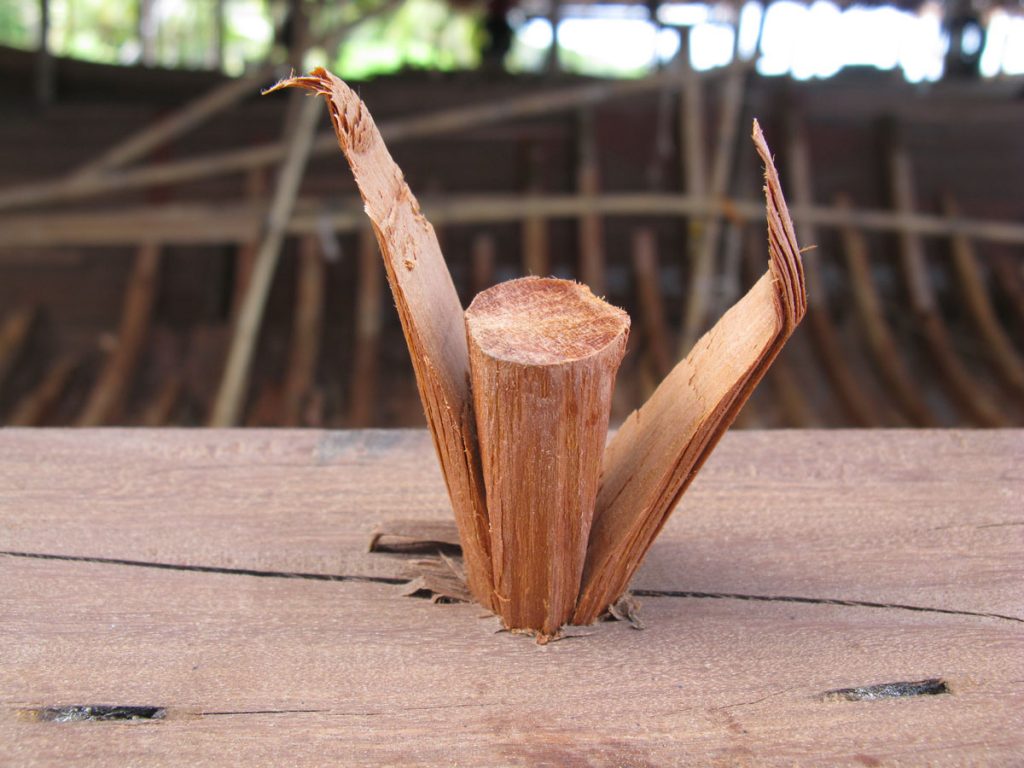 Lamima was built by the Konjos tribe in Bira, South Sulawesi in 2011. At that time, Bira was a small coastal village 10 km away from Ara which is the home of the traditional boat builders. Dominique (the owner of Lamima) found this place talking with other boat builders, he went to Bira himself and decided to start his project there, he made a great choice. As always, the Konjos started the project by doing a keel-laying ceremony and planning everything to launch the hull 9 months later.
For the people of Ara, the master-builder is the mother of the boat and the hull needs to go in the water 9 months after the keel-laying ceremony. 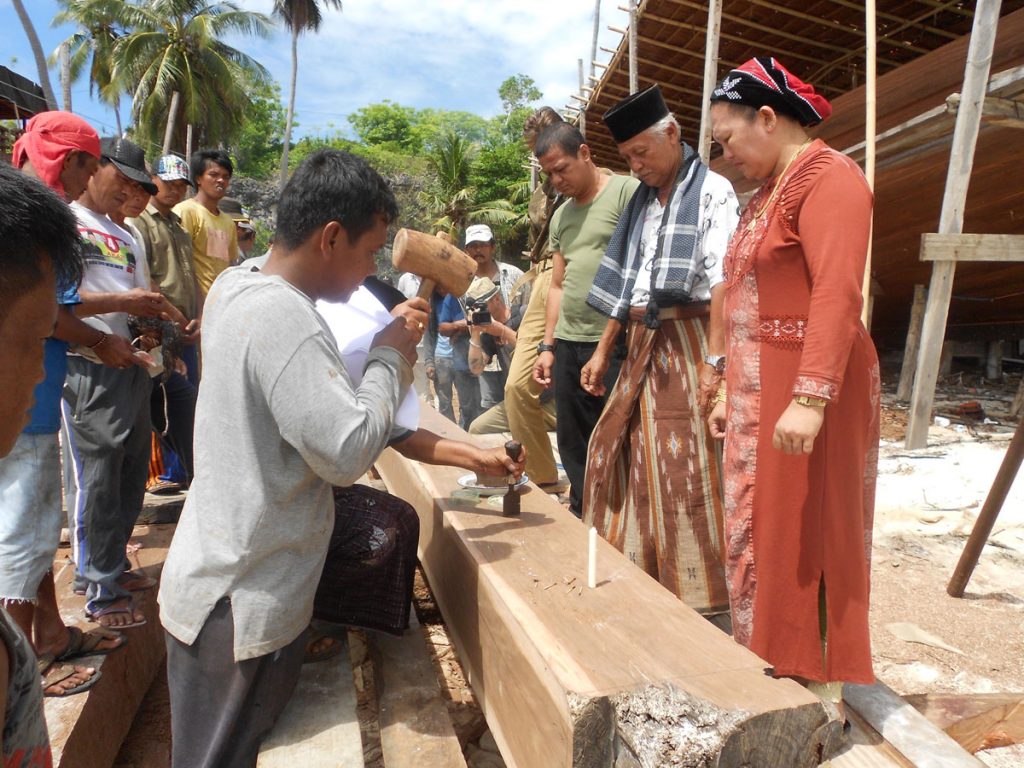 Apart from their significant role as boatbuilders, the Konjos are also recognized for their music, more particularly for the ganrang Konjo, a set of musical instruments that often accompanies their wedding ceremony called pabbuntingang. It is composed of drums, gongs and a wind instrument, and played to produce what music experts would describe as funky rhythms. The playing of the ganrang Konjo is often associated with those of noble birth or coming from the karaeng or puang class of their caste system, which is continually practiced at present.

Sailing at The Forefront of Ecotourism

Today, the sight of a Phinisi still evokes a prehistoric charm amid its evolution from a cargo ship into a luxury sailing yacht with some models featuring diving provisions. Seafaring travelers may indulge in a modern-day ocean expedition aboard a Phinisi, as it combines excellent Konjo workmanship with the comforts and safety of high-end yachts. Currently, skilled craftsmen who learned from their forefathers are continuing the Phinisi boatbuilding tradition even outside of South Sulawesi. The Konjo builders have spread out and have reached the shores of Kalimantan in Borneo, where high-quality timbers can be found for assembling ships up to 50 meters in length.

Undeniably, sailing on a Phinisi presents more than just the thrill of a voyage far and beyond, but inevitably forms a connection between the traveler and Indonesia’s great boat makers and their ancestors. The Phinisi remains to represent Indonesia’s rich maritime heritage and its steadfast commitment towards the conservation of earlier practices with the artistic and ecological use of natural resources at its core. Present-day Phinisi builders continue to stay true to their forefathers’ original mechanism. This method brings Phinisi sailing at the forefront of sustainability, contributing to the growing conscious traveling movement. 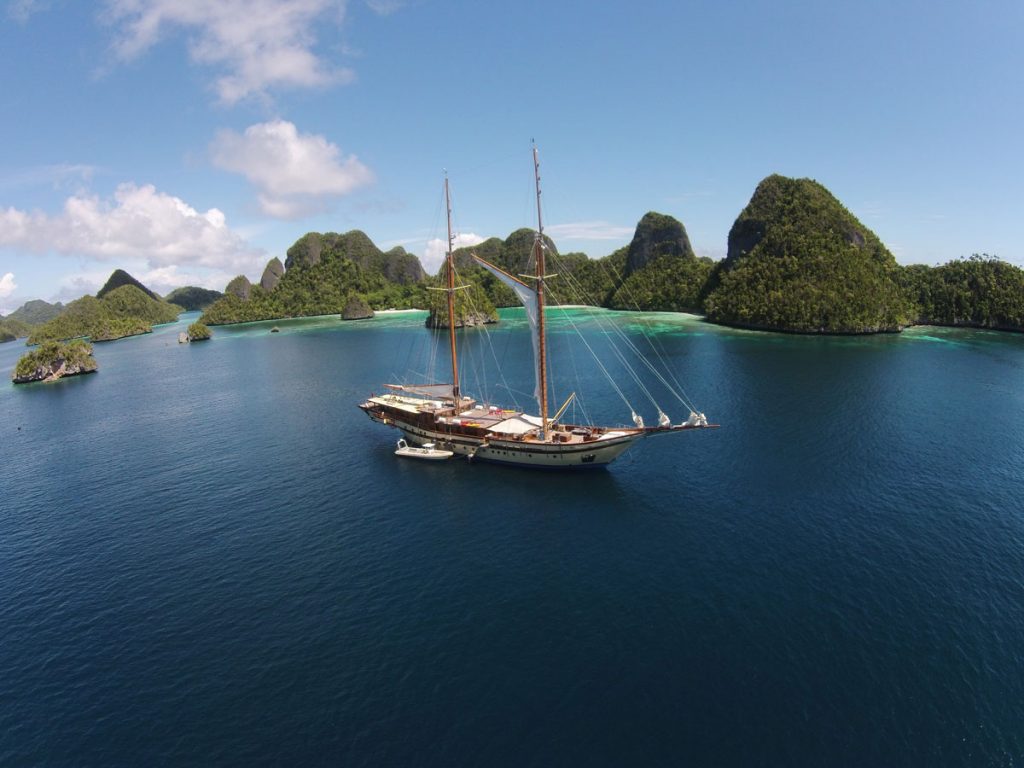 Indonesia sailing charters stand out as a unique travel experience offering sights of lush mountain ranges and unspoiled beaches yet to be explored. Cruise through the Eastern Indonesian archipelago through The luxury sailing yacht Lamima for an unmatched seafaring adventure. Inspired by a 1920s Phinisi model, Lamima feature 1,277 square meters of sails, as the traditional Phinisis  before the engine era.