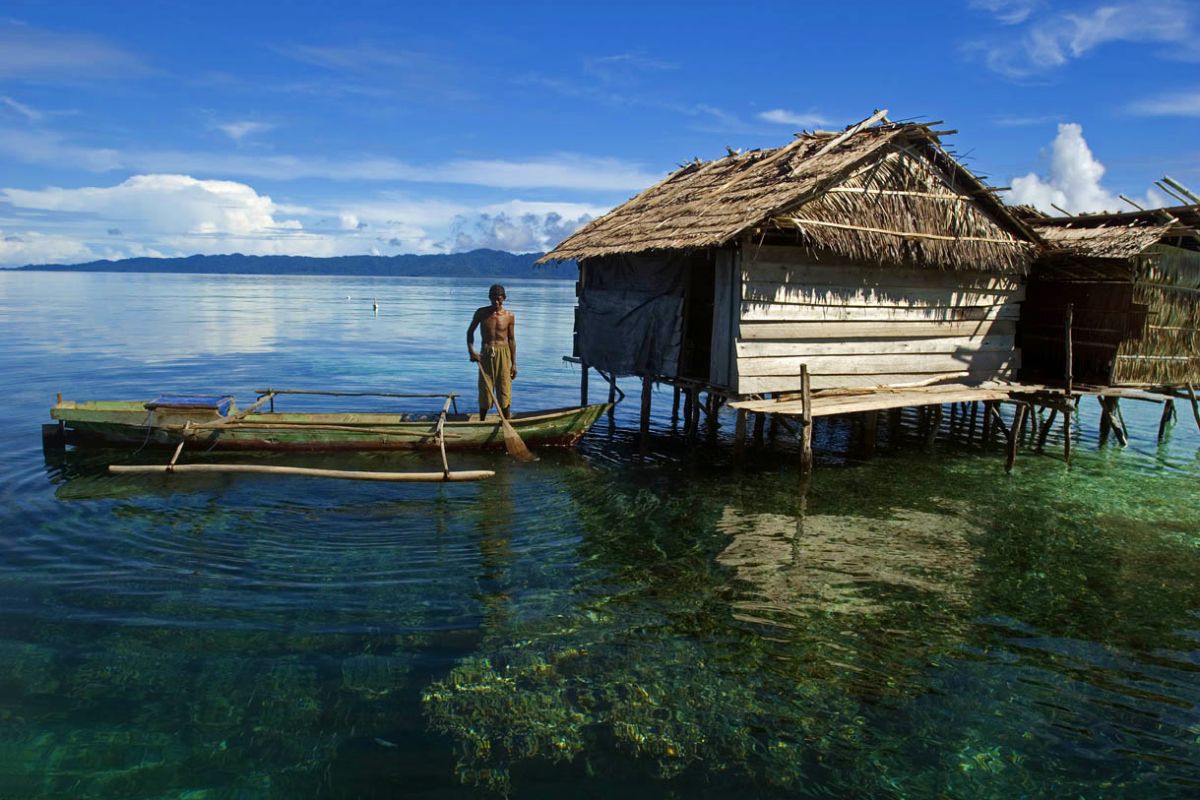 Recapturing The Past In Lord Loughborough Island

Until recently, Mergui Archipelago, also known as Myeik Islands, remains to be a mystery to many. It was in 1965 when it was last publicly shown in a James Bond film called “Thunderball” where it became the chosen remote drop-off spot for a ransom. The mystifying island was also then recognized for its Moken pearl divers, also called as the “sea-gypsies”, who up to the present time, explore underwater holding their breaths longer than what is thought humanly possible. With the very few that have heard of the elusive region, it seems even fewer can find it amongst the boundless Indian Ocean. According to the story of the indigenous marine nomadic people, the Mokens, a mythical flood separated the Mergui Archipelago from Myanmar thus creating an interesting world of its own.

“A necklace of emeralds thrown down nonchalantly on a turquoise robe”, as it was described in a classic adventure series, the Mergui Archipelago lies perfectly in a 600-kilometer long stretch off Myanmar’s coast, resting in the Andaman Sea on a vast canvas-like ocean when seen on its aerial view. When searching for the archipelago, a map of the Bengal Bay will show as it connects with the Andaman Sea, where Mergui islands can be found. It is untraceable among India’s Andaman and Nicobar Islands, the coast of southern Myanmar and Thailand. Remote and lost in the mists of time, parts of the Mergui Archipelago remains unmapped and often reward ocean drifters with uncharted beaches that deliver delightfully unique surprises. Myanmar, formerly known as Burma, is a small archipelago with roughly 800 islands, mostly uninhabited, and with each island offering a different sense of culture and history.

Unflooded with tourist crowds, the Mergui Archipelago is considered “the aquatic Shangri-la” of Asia as it provides a secluded and exclusive atmosphere glazed with immaculate white sandy beaches and pensively painted seas. While the virgin islands are unblemished, it often does not have coconut palm trees naturally growing by the coasts to provide a perfect shade while lounging at the beach, but it still certainly delivers a captivating and eccentric splendor.

An exquisiteness that radiates a beauty off of a documentary film, Lord Loughborough is sacredly one of the most captivating islands in the Mergui Archipelago. Named after the honor of a British India captain, Lord Loughborough, is a beautifully-formed isle covered in lush green forest. Also known by its local name, Jan Lann Kyun, Lord Loughborough exudes a beauty that is conveniently post-card ready. Offering the most unforgettable fishing and snorkeling experience any tourist could dream of, the island boasts a spectacular show of stunningly vibrant soft and hard corals and divine and bountiful marine biodiversity. A dramatic sunset by the mangrove forest while watching the crowd of hornbills and dreamily transitioning to a bursting display of stars would be the perfect rewarding end to any productive and thrilling day.

Apart from its diverse nature life, Jan Lann Kyun also houses one of the largest villages in the Mergui Archipelago, making for an interesting thriving local culture. The island has a mixed population of the peace-loving Mokens and Bamar people, both ethnic groups that live primarily by the waters. Lord Loughborough also has one of the most extraordinary pagodas in the Mergui Archipelago, adding to the charm of the enthralling island that can only be accessed by boat alone. The local populace lives through fishing as their main livelihood and is often seen adrift the horizon with their nets and handmade teak boats, coming back onshore with catches of squid and fishes, eagerly welcomed by the community. 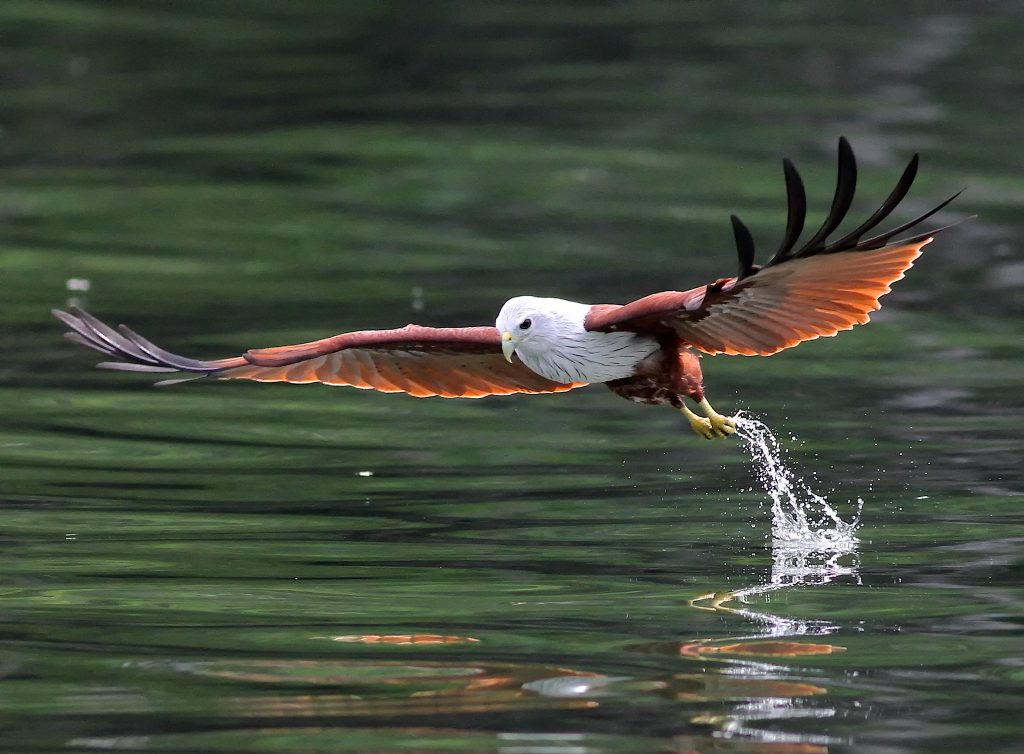 The only Marine National Park in Myanmar protected by the government can be found on the Mergui Archipelago. Lampi Island, a wide, hook-shaped isle that has among the best natural life and scenic land and seascape in the archipelago along with Jar Lann Kyun (Lord Loughborough), Kha Yin Gwa (Macleod Island), 115 Island, and Kyun Pila (Great Swinton Island). Lampi Island is the heart of the aquatic national park, nominated for UNESCO World Heritage Site, covering a 48-kilometer long stretch of mountainous tropical evergreen rainforests bounded by an all-embracing coral reef system.

Apart from the uniquely interesting Moken villages are the wide variety of flora and fauna found in the Mergui Archipelago. Beyond its mysterious aquatic life, the coasts are often visited by the magnificent red-backed sea-eagles or Brahminy Kite, hornbills, crab-eating monkeys, water monitor lizards, and even small-clawed otters.

Moken People: Gypsies of the Sea

“Moken”, as translated in their local Malayo-Polynesian dialect, means “those who dive”. The Moken people are an Austronesian cultural group known for their extraordinary diving skills and generations of exceptional knowledge of the sea, having been born and lived at sea. They have traditionally spent most of their time at sea, onboard their large dugout canoes also called Kabang. While recognized as the sea gypsies or sea nomads, their traditional migrations are now discontinued and they do not drift aimlessly throughout the sea but instead, situate themselves on a specific island that serves as their base.

Although they do not live sailing on their boats, they see themselves deeply connected with it that without their boats, they cannot be considered as Moken. They use two kinds of boats: the Kabang which is a large canoe made from a tree trunk and serves as an alternate home, and the Chapan, a smaller rowboat used for smaller-scale fishing and for traveling a shorter distance. Each family constructed and own their boats that are made entirely by hand with basic tools such as a multi-use adzes and axes. When a tree is chosen to be used for the Kabang, a simple prayer ritual is done as respect to the guardian spirit of the tree before it is cut down. The tree is then cut down and hollowed before it is hauled out the forest with the help of the community and constructed in the village. The wood is then suspended with a slow fire burning at the bottom to soften and make it more flexible before the sides are stretched out and widened. The process is done repeatedly until it is wide enough to serve as the boat exterior. Over time, the Kabang exterior has changed from Zalaca wood to more durable wooden planks but earlier Kabang made from Zalacca wood and secured by cords made out of rattan can still be seen being used by the Mokens in Lord Loughborough.

A small fishing village of the seafaring Moken people and other local fishermen can be found in the northwestern area of the Mergui Archipelago – Lord Loughborough. From around 3,000 Moken people living in the Mergui Archipelago, Lord Loughborough hosts the biggest population. Upon sailing by the coast of the island, visitors are greeted shyly with smiles by the Mokens and a group of kids can be seen enthusiastically sailing out paddling in a standing position with crisscrossed oars, eager to observe in their hollowed canoes. The small island has a wooden jetty that serves as an entry point to local fishermen and visitors. As you walk past the jetty to explore more of the village, you will find a small local school overlooking the ocean where more children are found timidly welcoming visitors. There are a few local mom-and-pop shops that can be found within the village selling local produce including cashew nuts. Fish and other seafood are the most common products for trade and you can buy them directly from the fishermen. At one end of the village is another school and a Buddhist temple where locals are seen regularly visiting. 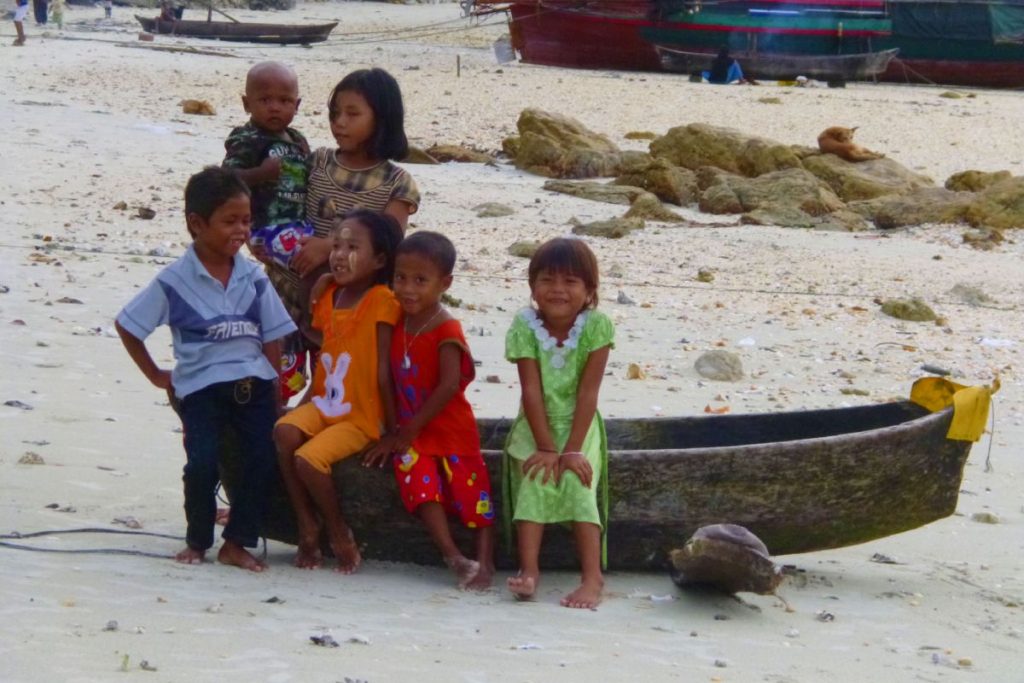 As life on the island mainly revolves around the ocean, the local community resides in small wooden stilt houses framed firmly by the sea. Moken children are often seen curiously greeting tourists when they walk by as the village is rarely visited by foreigners. Tourists are often genuinely welcomed into the homes of the Moken people and elder women cooking sea cucumbers or what they locally call as trepang, drying fish, and making charcoal is a common scene while the men are either sailing, working on their boats, or on the mainland. Local fishermen gladly flaunt their skills and techniques while working on their canoes should a visitor shows interest.

As with other Burmese locals, some of the women, children, and men smear a yellowish-white Thanaka paste, made from ground tree bark, on their faces and sometimes on their arms. The Thanaka has been used by the Burmese as a natural sunscreen that protects and enhances the skin.

Since no designated tourism organization or tourism program is present in the Mergui Archipelago, the only way to relish the virgin white sandy beaches is hopping onboard a private yacht charter that makes its way through the island. Most charters travel from the southernmost city on the mainland of Myanmar, Kawthaung, which can be accessed from Yangon, the capital city of Myanmar, or Ranong in southern Thailand. Though Mergui islands are within Myanmar, traveling from Ranong, Thailand is just a short boat ride. Spending a night or two in Kawthaung is recommended for a more carefree journey with some accommodations offering a spellbinding overlooking panoramic view of the Andaman Sea. When traveling to Myanmar, best to check for government documents and visas required for foreign visitors to ease the process in immigration.

Climate and sea conditions are most favorable from October to May, making it the best months to visit the remote and virgin beaches of the archipelago with the crystal clear waters vary from emerald green to violet-blue. From June through September, the coasts of Mergui islands experience southwest monsoon that brings rain, wind, and waves, making it more difficult for traveling by sea.

Unassumingly wealthy, luxury truly does lie in the territory for the Mergui Archipelago with their interestingly vibrant culture and immaculate yet dynamic nature life that makes visitors lost in wonder.