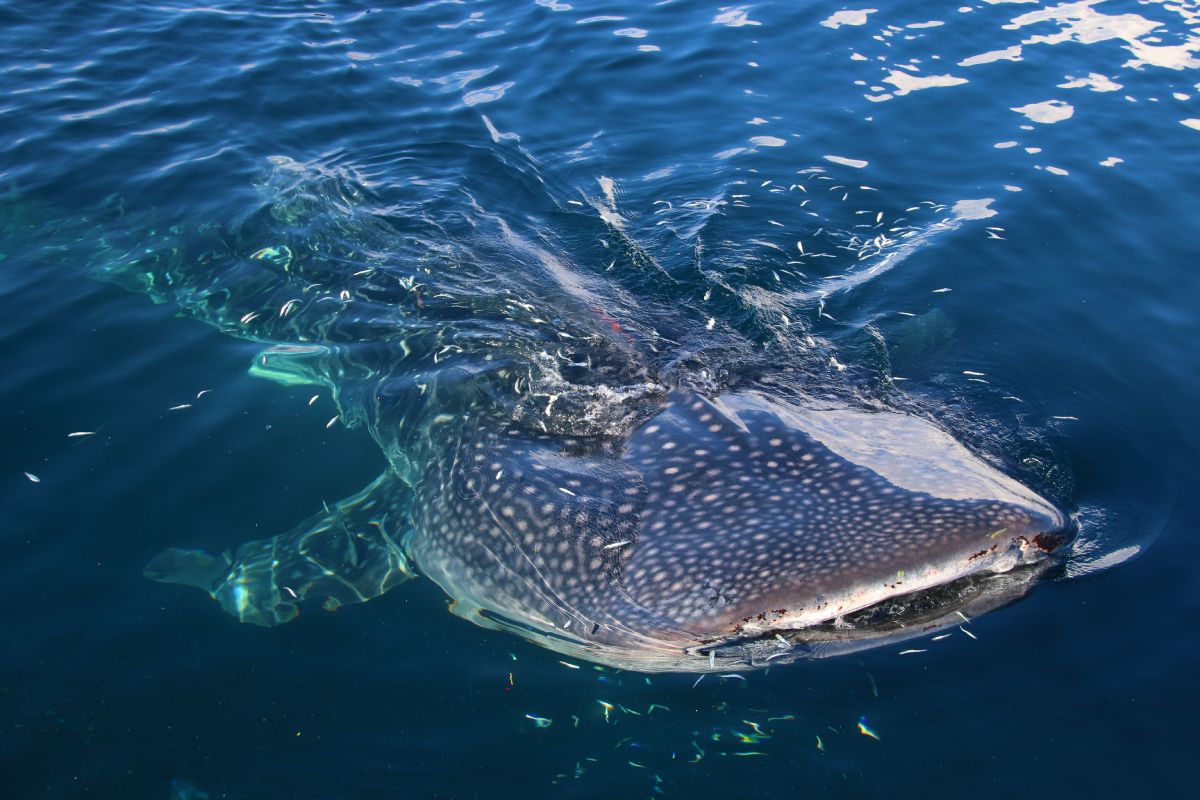 As you dive deeper into the sparkling tropical water filled with enthusiasm to do some macro photography of the corals and schools of fish, expect to encounter whale sharks and enjoy the pleasure of swimming beside one of the largest animals on this planet. It can be an experience of a lifetime. Something you will cherish for years!

Triton Bay is known for its fantastic corals and marine life, but not many people know that the floating fishing platforms known as Bagans of the bay attract the whale sharks like bees to honey. They can be spotted throughout the year in locations where the bagans operate. Instead of showing up and disappearing, these giant whales stay for prolonged hours allowing enough scope to visitors to swim with them.

Should Guests Be Afraid Of Whale Sharks?

When we hear ‘shark’, our mind usually conjures up images of a large and ferocious fish with sharp teeth, looking for its prey. Common misconceptions have it that sharks can smell blood and hunt down humans. Our notion about sharks is very much inspired by ‘Bruce’ from ‘Finding Nemo’ (movie). However, these huge mammals are the opposite of how sharks are depicted in the movies.

The giant whale sharks roaming the tropical waters can grow up to a whopping 60 feet. They are rarely found in waters with temperature cooler than 72 degrees Fahrenheit. Despite their huge size and a mouth that can reach up to 5 feet, there’s no need to be scared of them.

With their mouth containing about 300-350 teeth, it’s a surprise that these whales are filter feeders. They exclusively feed on tiny nektonic life comprising of planktons, squids, copepods, krill, larvae, and eggs. They will swim with you harmlessly like the dolphins.

Experienced divers don’t mind getting up-close to see their teeth and look inside their huge mouth (try this only if you are not afraid of such a huge mouth opening in front of you). 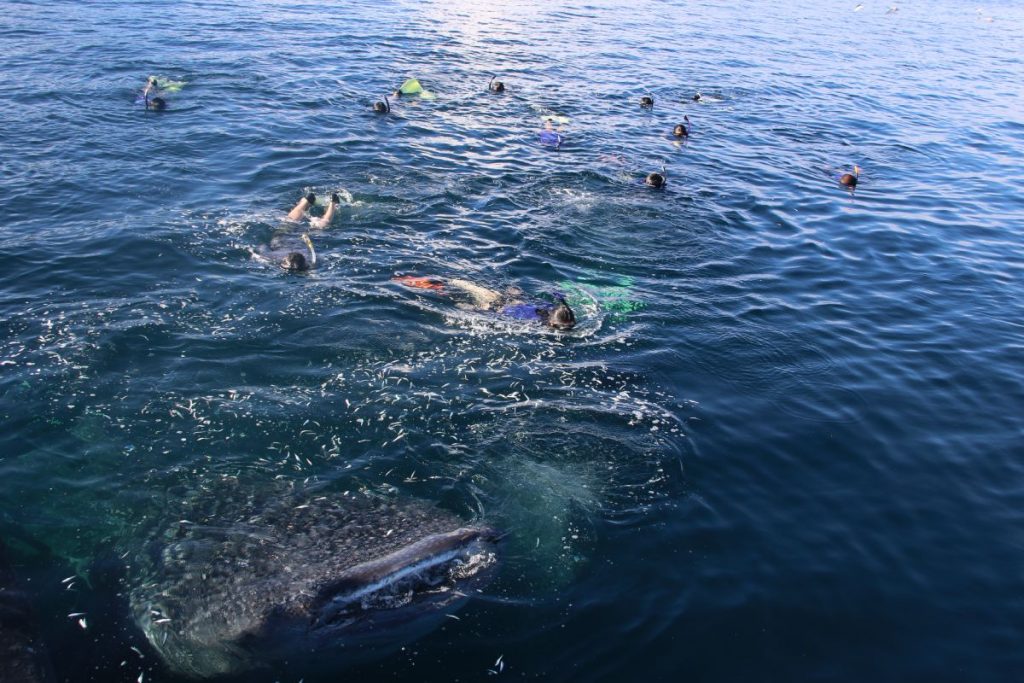 Culture And Beliefs Of The Locals

The local fishermen on the Papua’s coastline are well aware of the presence of these gentle giants. They frequently visit the fishing platforms where the locals use baitfish to catch large fish in their nets. Some of the bait fishes escape from the holes and they become an easy meal for the sharks.

Also, one of the reasons why these whale sharks are available all the year round in Triton Bay is that the villagers feed them regularly. As a result, whale sharks don’t need to leave the area in search of food. This makes the region a gold mine to find and swim with these gentle giants.

Many local fishermen consider their presence around their bagans as auspicious. As more travelers explore these best-kept diving sites in East Indonesia to swim beside whale sharks, the local communities are becoming more concerned about protecting the whale shark population.

While shark tourism has been drawing tourists from around the world since 2010, the Kaimana region is still at its nascent stage of realizing its full potential. 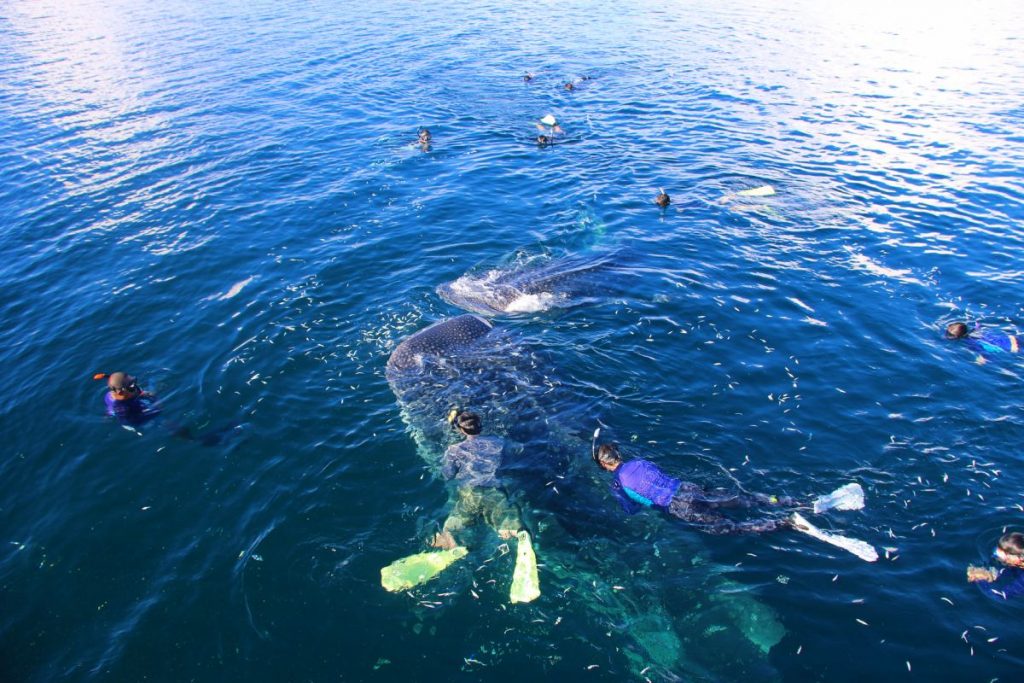 In the west coast of Australia, travelers do some crazy things to swim with the whale sharks. They will chase these giants in spotter planes and send out speedboats laden with tourists to catch a glimpse of them. In East Indonesia, you can find the less touristy Triton Bay, which is home for these giants.

Instead of jetting in speed boats and chasing them in spotter planes, you can just swim down the bagans that attracts whale sharks like magnets. This is the only place in the world where you can find whales measuring as long as 60 feet and weighing 20 tons all the year round.

Unlike other sites where you can blink and miss the sharks, the West Papua region lets you swim with these humble creatures for hours. As a result, you have a lot of time to take pictures, swim with them, and soak in the pleasure of a nerve-chilling experience.

While the Triton bay gives you the privilege to swim with whale sharks, you must not forget that this is a protected area. Be a silent spectator and swim without touching or disturbing the whale sharks in any way.

The best time of the year to swim with whale sharks is from October to March when the season is dry, the sea is calm, and the visibility is good. If you wish to swim with the whale sharks in Triton Bay, you can check our sample itinerary.