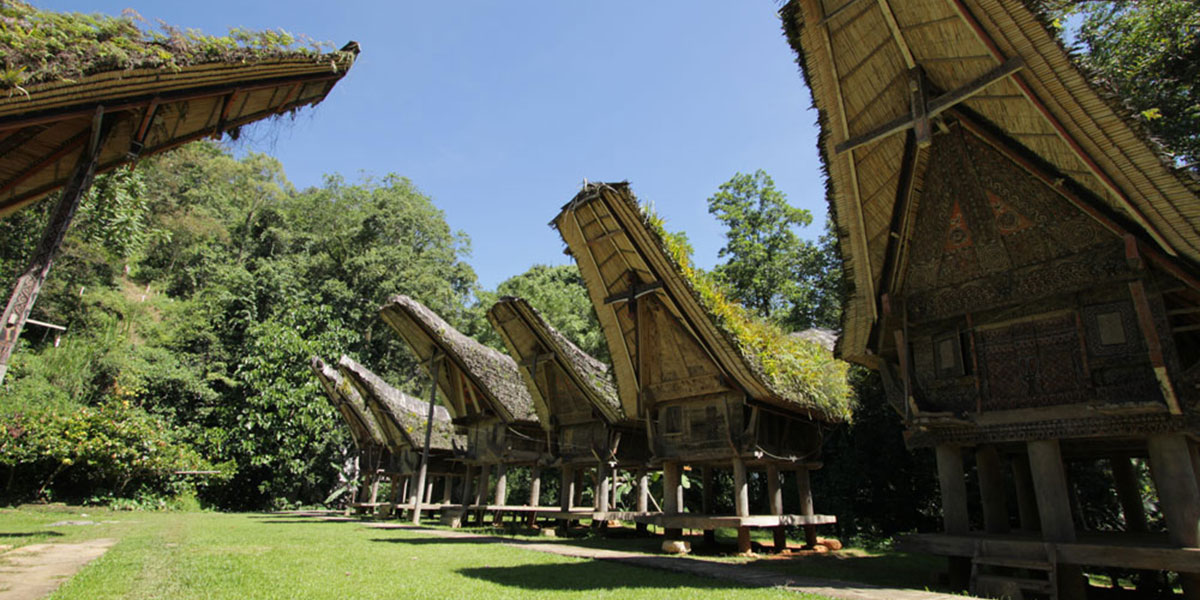 Melissya Febrianti Randa Tandungan is a blue-blooded princess of the smallest and most remarkable of these groups, Tana Toraja. With the true grace of a king’s granddaughter, Melissya has taken our project to heart and provided valuable advice and local information. 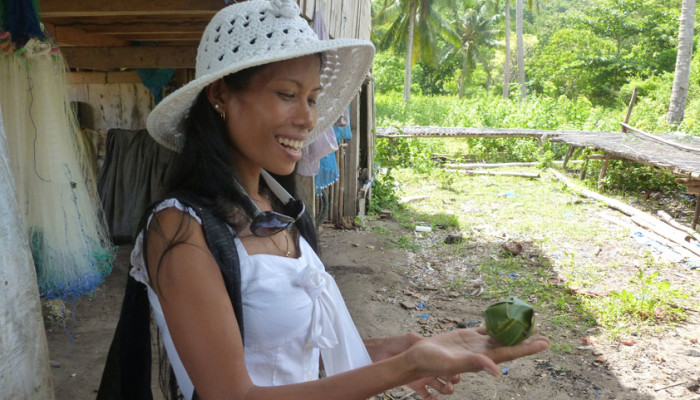 Needless to say, the insights that Melissya has been able to provide regarding her birthplace have given impetus for us to encourages travellers to explore Toraja in South Sulawesi, Indonesia.

Toraja is a sleepy rural region where rice is cultivated on rain-soaked, fertile terraces and the rusty red of the soil contrasts with shimmering granite boulders and the blue of the mountains beyond. 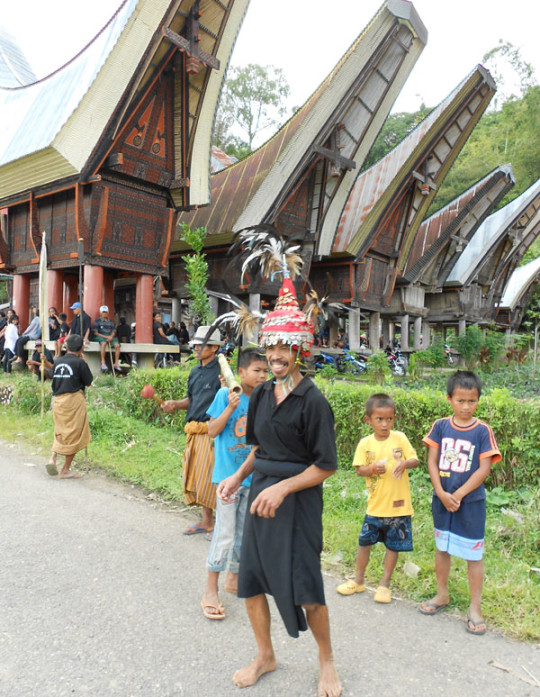 Here, sequestered in the remote valleys of the Quarles Range, the Toraja remained in isolation until as recently as the beginning of the last century. The majority of these people still follow their unique Christian animist culture, ‘Aluk Todolo’, which governs all traditional ceremonies. Aluk is not just a belief system; it is a combination of law, religion, and custom which governs social life, agricultural practices, and ancestral rituals.

Their ancestor worship includes elaborate death and after-life ceremonies. As Melissya explained, only nobles have the right to hold these extensive death feasts which are held not only for mourning but also to renew family ties and to ensure continued unity among villages and communities.

Melissya, like all Toraja, returns to her village on such occasions. Her maternal grandfather was a king but, not wishing to attract the attention due to nobility, she uses neither her middle nor last name when visiting her ancestral home. Even so, people of the community still recognize her as a princess and call her ‘grandma’ out of respect, even though many are older than she. 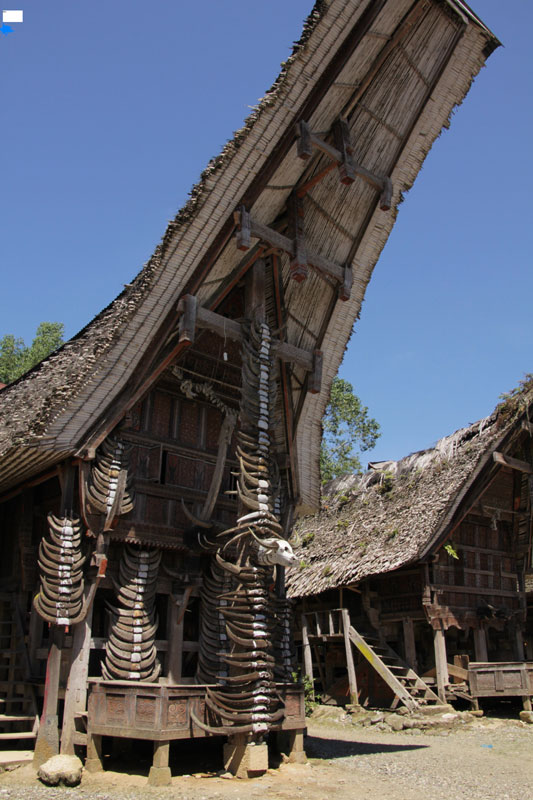 Family is the primary social and political grouping in Toraja’s society. Each village is one extended family, the seat of which is the tongkonan, or traditional house. Historically, only the nobility had the right to build these elaborate and beautifully carved edifices and the most important houses were the seats of political power for local rulers who dominated small groups of villages.

Each noble family, like that of Melissya, has a long past, full of myths, mystery, and ancestral achievement and their relationships have always been tied closely to social class. In earlier days there were three strata: nobles, commoners, and slaves. Class was inherited through the mother and it was therefore taboo to marry “down” with a woman of lower class. On the other hand, marrying a woman of higher class could improve the status of the next generation. In older times, commoners were able to marry anyone but nobles preferred to marry within their family to maintain their status. Nobles also marry Bugis or Makassarese nobles, just as Melissya’s father is half Javanese, half Bugis but also from a royal family.

Slaves in Toraja society were family property and, says Melissya, they still exist in her grandfather’s village although many now have their own home and more wealth than she. However, neither she nor her family members could marry anyone of that status – ‘a slave is a slave’ she says, and if she were to marry one she would be cast out from her family kingdom. To this day, commoners and slaves are prohibited from holding death feasts. 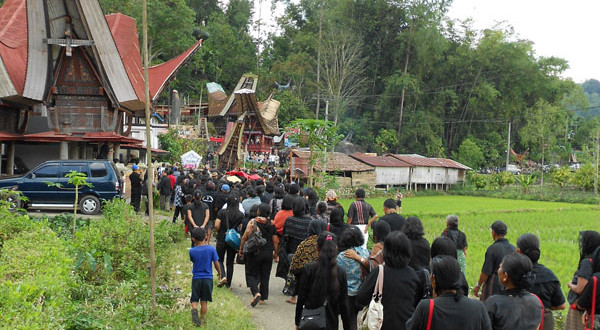 Celebrations of both life and death take place within and around the traditional ancestral houses or tongkonan. These amazing structures stand high on wooden piles and are topped with saddle-backed roofs of bamboo. The dramatic upward-sweeping arc of the roof is intended to represent the prow of the ship which, according to local lore, descended from heaven with the Toraja forefathers. More than any other physical artifact, these houses symbolize the history, culture and identity of the Toraja. 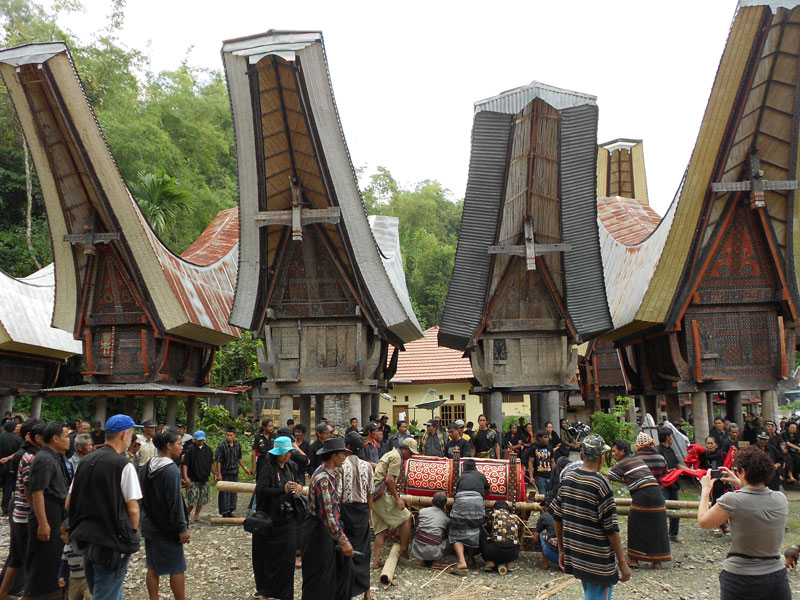 Tongkonan such as Melissya’s family home, are incised with red, black, and yellow detailed wood carvings on the exterior walls where many score of water buffalo horns are mounted. To this day wealth is counted by the ownership of water buffaloes and the number of animals sacrificed by the owners of a great house at major rituals is an indication of their prestige.

An aura of deep mystique pervades such housing sites. The houses all face north and some say that this is because it was from the north that the ancestors of the Toraja came. Others say that the north (and east) is regarded as the realm of the gods on the compass of life. 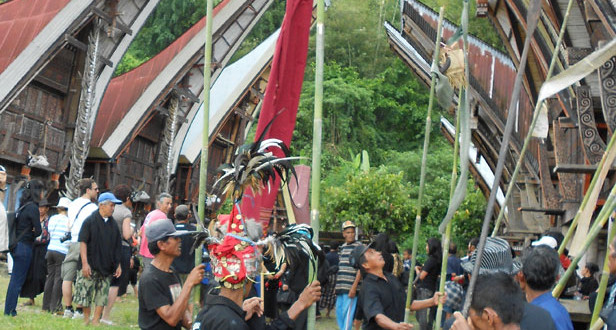 In Toraja society, the funeral ritual is the most elaborate event. A strict social hierarchy is followed and, for those of noble birth, burial ceremonies take days to perform. Water buffalo and pigs are sacrificed in numbers appropriate to social rank. and the wealthier and more powerful the individual, the more expensive is the funeral. It is quite normal, says Melissya, for the ceremony to be held weeks, months, or years after a relative’s death as this enables the deceased’s family to raise the significant funds needed to cover funeral expenses.

During the waiting period, the body of the deceased is wrapped in several layers of cloth and kept under the familytongkonan. The soul of the deceased is thought to linger around the village until the funeral ceremony is completed, after which it begins its journey to the land of afterlife or Puya. Such ceremonies, however, are held only after the last rice harvest is in for the year and the threshing floor cleared. 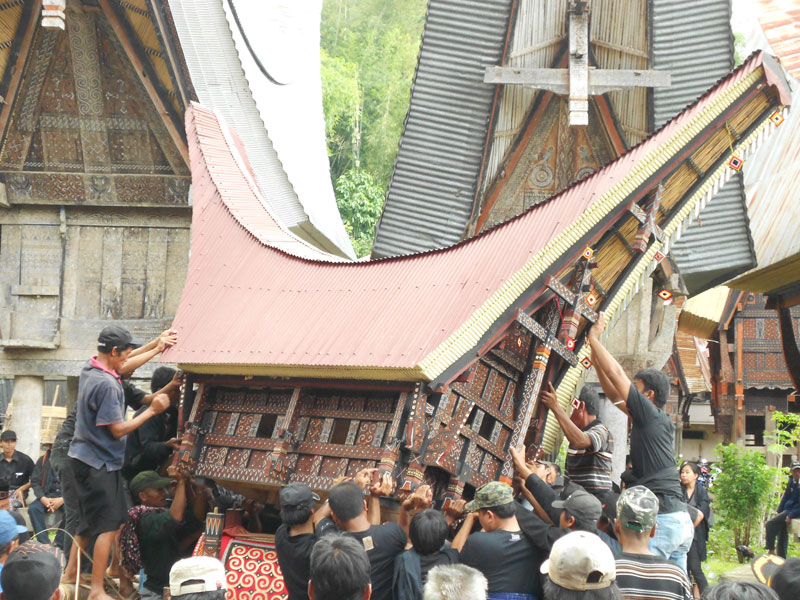 A ceremonial site, called rante, is usually prepared in a large, grassy field where audience shelters, rice barns, and other ceremonial funeral structures are purpose-built by the deceased’s family. Flute music, funeral chants, songs and poems, dances and wailing are traditional Toraja expressions of grief. 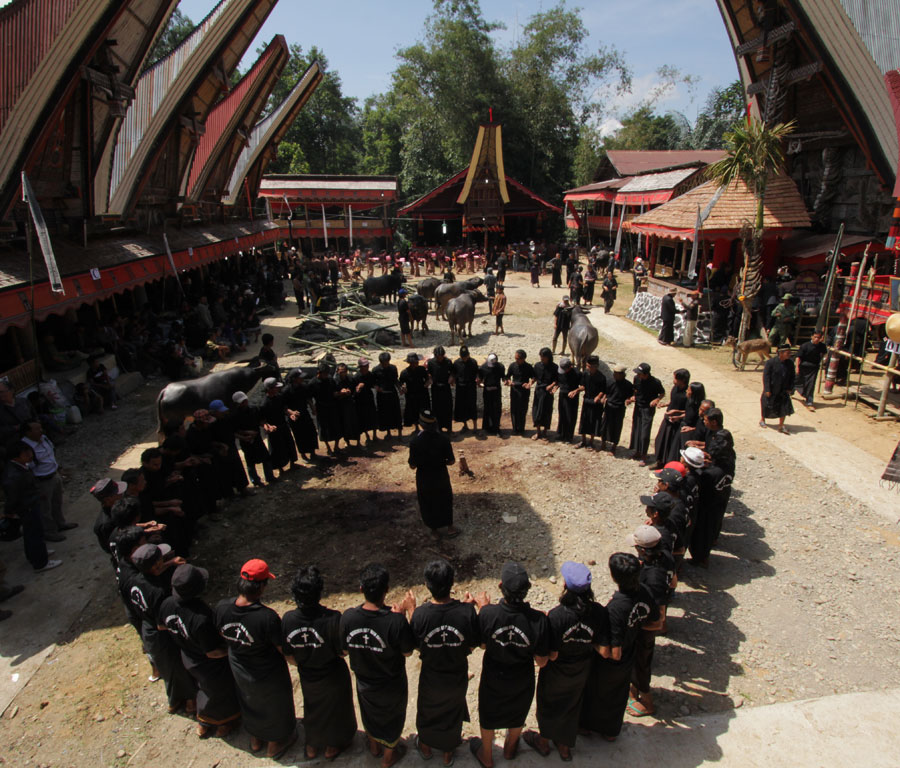 The participants dance not only to express their grief but also to honour and even cheer the deceased knowing they will have a long journey in the afterlife. 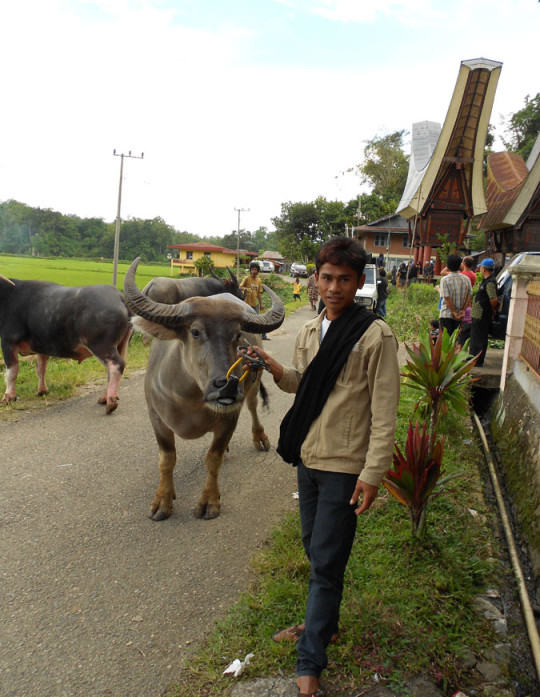 Another essential component of the funeral ritual is the slaughter of water buffalo. The more powerful the person, the more buffalo are slaughtered at his or her death feast. Slaughtering tens of water buffalo and hundreds of pigs is the climax of the elaborate death feast, complete with dancing and music and young boys catching the spurting, sacrificial blood in long bamboo tubes. 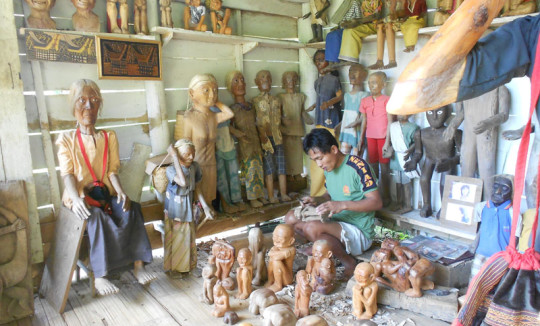 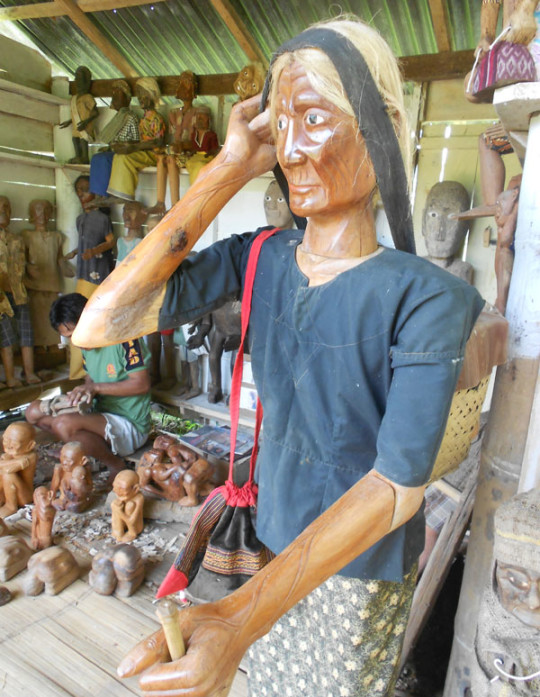 At the end of the ritual, the coffin may be laid in a cave or in a carved stone grave, or hung on a cliff – but always it is guarded by lifelike, hand-carved wooden effigies called tau tau, which look out from a balcony near the burial site, watching over the families and friends they have left behind. (The Toraja language is only spoken, explains Melyssia. As no writing system exists, the Toraja carve wood to express social and religious concepts,). 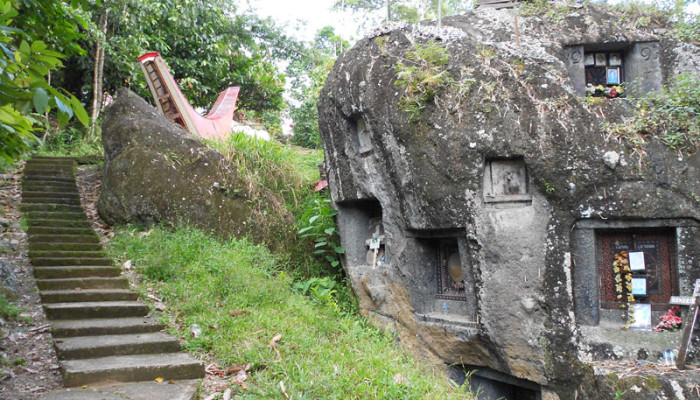 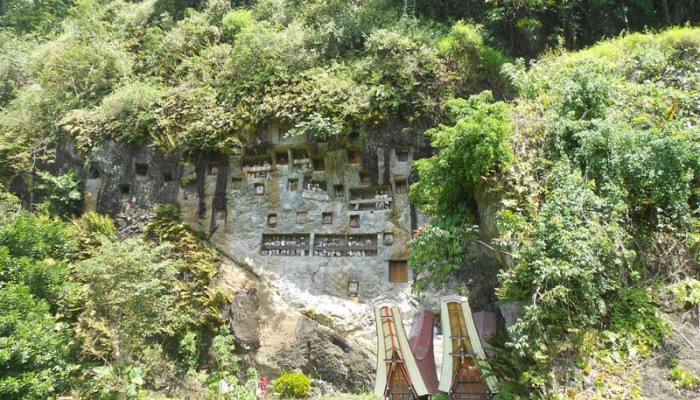 In the case of Melissya’s family, her grandfather the king declared that nobles’ graves should be positioned very high as became their status. These days, she says, it is a very expensive undertaking to bury family members at the top of a mountain so her family’s mausoleum is more like a small traditional house, a replica tongkonan with the upswept eaves and red, black, and yellow detailed wood carvings on the exterior walls. It has been built large enough to contain seven ancestors. 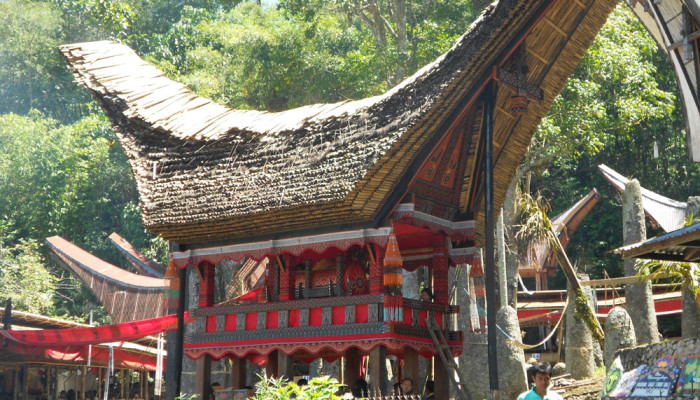 At Toraja funerals, the house, the granary, the palanquin and the catafalque all take the extraordinary but familiar shape of the traditional dwelling, and each functions as a transitory shelter for the body and the soul until such time as the soul departs for the abode of the dead.

Interestingly, the planking of a tongkonan’s construction, their emplacement on high pillars, the shape of the roof and the rarely observed rna bua padang feasts of merit all suggest a relationship between Toraja houses and sea-going ships. Perhaps that explains Melissya’s familiarity with the project of building Lamima.

Just a note of thanks to Melissya, not only for all the information, but also for the photos she kindly provided for this post.