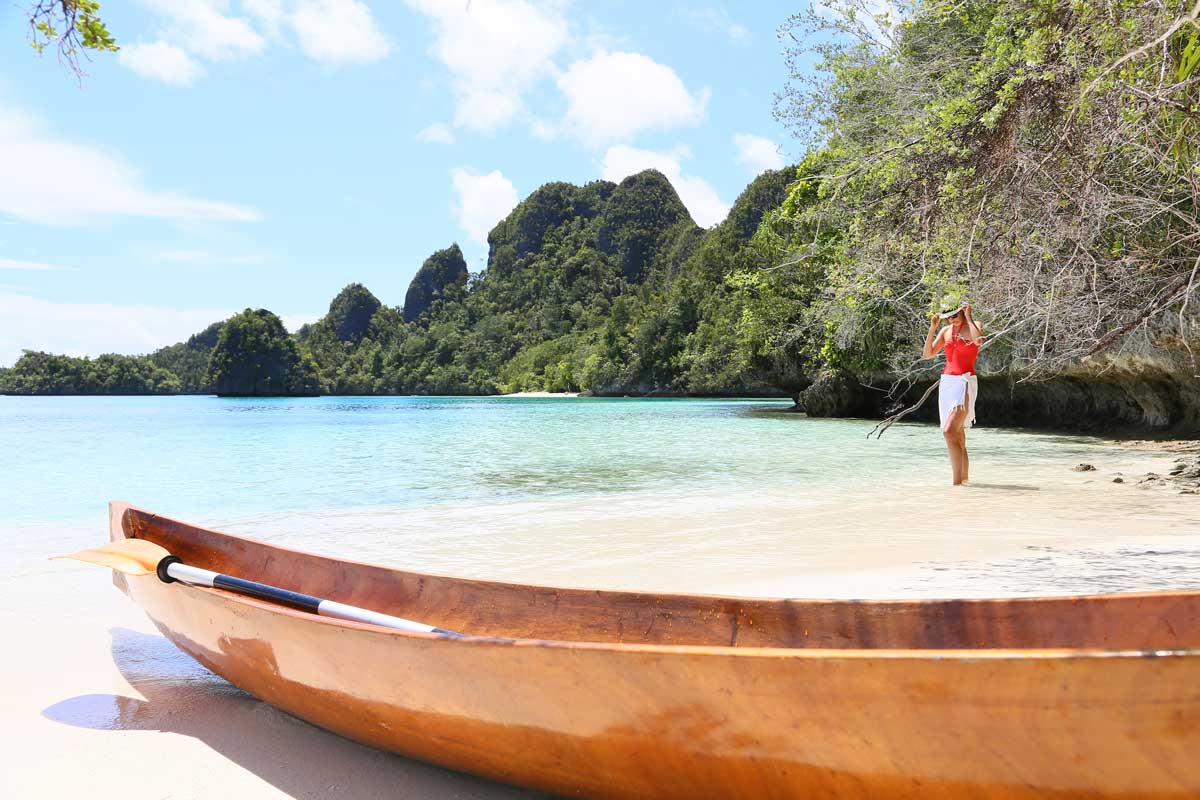 The Lepa-Lepa: An Enduring Tale of Tradition and Travel

Never falling short of traditions that have endured over centuries, Indonesia is an extraordinary country where the transcendent old world meets the new world’s ever evolving contemporary culture. Exploring its thousands of islands becomes more exciting through its traditional seafaring vessels, such as the Lepa-Lepa, that symbolizes quality craftmanship and long-established practices handed down through generations. Cruising through Indonesia’s open seas on the wooden Lepa-Lepa is one way to get to know such a beautiful place in the most authentic way. 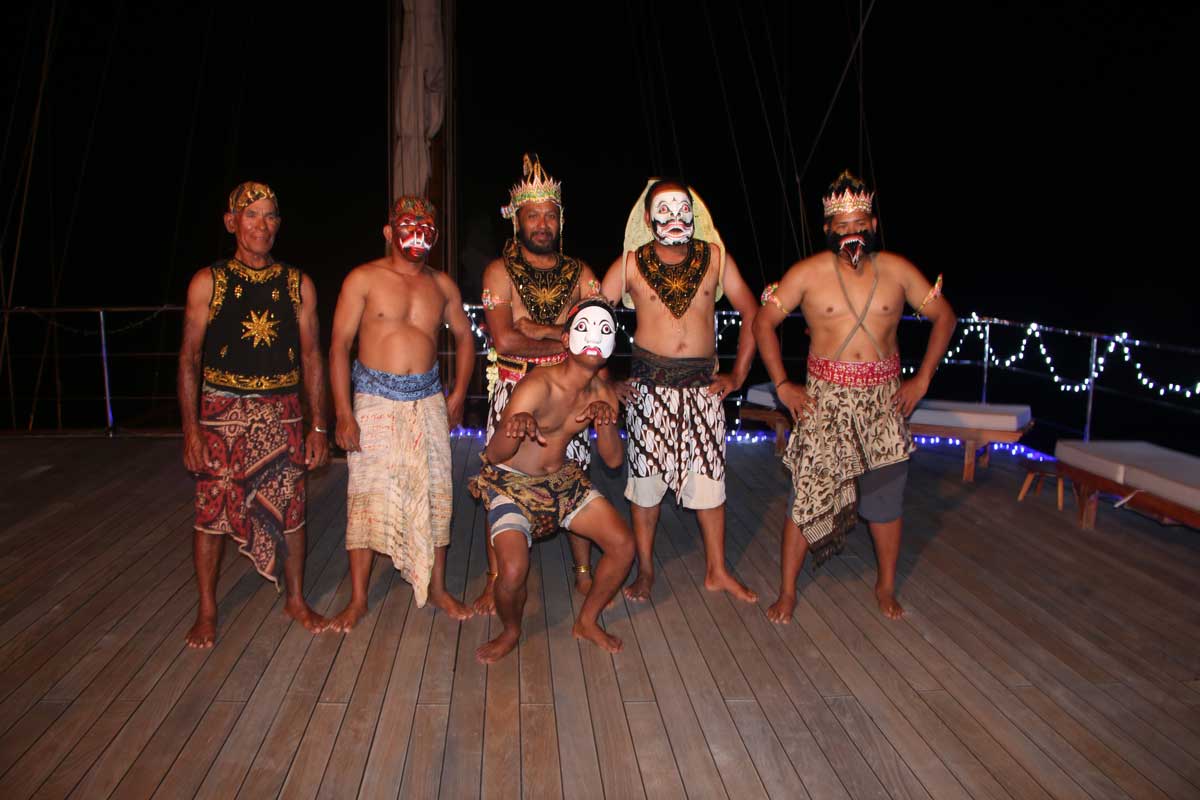 Indonesia paints a remarkable illustration of a rich and diverse cultural history sustainably thriving alongside a bustling urban backdrop. Tribal dialects and the practice of animist traditions are very much present in the West Timor mountains, while on the other end of the spectrum, Jakarta is swarming with millennials setting their own trends and counterculture lifestyles. Furthermore, the secluded regions of Sumatra, Kalimantan, and western New Guinea continue to be the focal point of Indonesia’s mythical narrative traditions. Meanwhile, in Java and Bali, traces of Hindu epics Mahabharata and Ramayana remain to be alive in the visual and performing arts.

Undoubtedly, tourism has been a strong driving force in allowing the Indonesian economy to flourish. It has also introduced and sustained Indonesia’s distinct cultural identity, as seen in its 700-plus languages, art forms, historical sites, and natural resources. A specific example of such effort is advocated by Agung Rai Museum of Art in Bali, wherein it functions beyond a museum of artifacts and works of art. It offers cultural workshops, conferences, seminars and training programs to fully immerse anyone interested to dive deeper into the history and significance of Balinese art. Examples of these workshops include woodcarving, cooking classes, and batik making, which offer an opportunity for visitors to be personally engaged in Balinese traditions.  According to its founder, Agung Rai, it is vital for the “religious, social and artistic values” of each art piece to be communicated to a bigger audience. This will ensure that the ideologies and traditions that make Balinese art unique will continue to be relevant.

Known around the globe for its breathtaking, natural wonders, Indonesia has also been taking more steps towards environmental sustainability. At present, primary forests and peatlands are protected against logging and oil palm industries. Moreover, Indonesia has committed to decrease marine plastic waste by 70% in five years, and by 2040, it aims to be completely plastic pollution-free. Apart from these measures, tourists are invited to work together with the Indonesian government by adopting sustainable practices. As the home of the most beautiful natural sites in the world and one of the “megadiverse” countries in terms of biodiversity, anyone who sets foot in Indonesia is bound to have an experience to remember. Thus, it is important that tourists and explorers must also fervently contribute to its preservation. 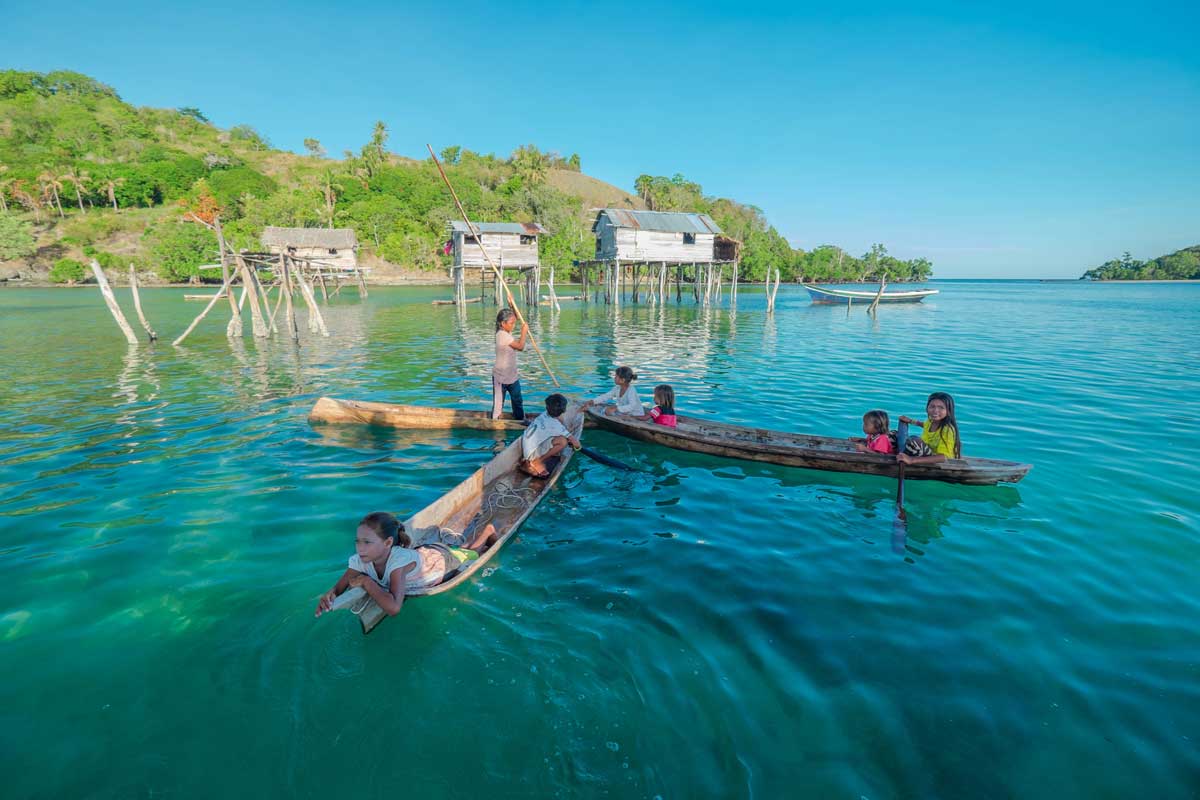 Of seafaring customs and innovations

As the world’s largest archipelago, Indonesia is anchored on a strong seafaring tradition that has both propelled the industries of communication and commerce. Up to this day, such practice is still ingrained in the daily lives of many, keeping the traditions and ingenuity of their ancestors alive.

Apart from the famous Phinisi of the Bugis tribe, another seafaring vessel—wooden canoes, or more commonly known as Lepa-Lepa in Sulawesi, is continuously playing a central role in the livelihood of the people. In Bali, these wooden boats are called Jukung, and Perahu Kayu Kecil in general, which shows this watercraft’s prevalence and importance for most Indonesians. A Lepa-Lepa is commonly used for fishing and carrying trading products such as fish, vegetables, and transporting people. Its lean structure makes it ideal for steering through narrow channels though nowadays, motorized Lepa-Lepas are utilized for longer distances of travel.

The customary Lepa-Lepa canoe is often built from a single hollowed wood, which can be of differing sizes. Without a sail, these canoes are propelled using paddles and may be expanded through extending more planks on either side. It is usually 3.4-9.3 m long, with 40–80 cm width, and a depth of 30–55 cm. Interestingly, boatbuilders still use ancient astronomical calculations, or the tanoar, that calculates “good and bad” days and dictates the day they can build a Lepa-Lepa.

A Lepa-Lepa’s double-outriggers are said to be a combination of advanced design and basic engineering and construction. These wooden canoes are often identified with distinguishing upward-curving outrigger booms, creating an elegant wing-like feature. Furthermore, it is fascinating to note certain details, such as the way the individual parts of a Lepa-Lepa are joined. The boom, or the strong pole that aids in controlling the sail’s angle, is attached to the hull, or the boat’s main body, while separate connector pieces are fastened to its ends. Consequently, bamboo floats are strapped to the connectors through lashings or multiple rope ties. The use of flexible structures connected from pieces of wood provide greater resistance as weight is distributed among its many threads or components. This explains why compound materials such as wood, horn, bone, and fiberglass do not break when hit with a heavy force. Thus, when a Lepa-Lepa’s outrigger encounters a reef, or the shore, its basket-like design allows it to absorb the hit and does not result to its parts shattering. 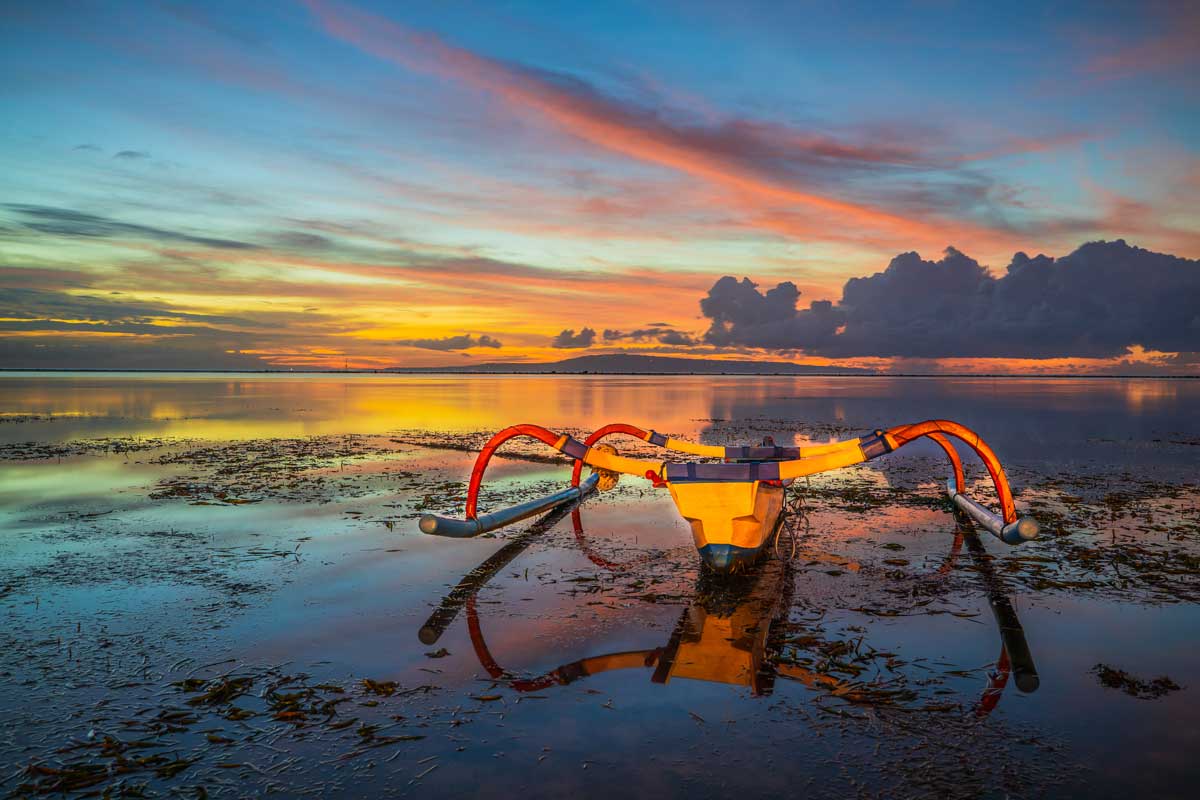 Jukung – a traditional fishing boat at the beach

During the 1980’s, nine international crews embarked on a maritime journey across 1,000 nautical miles in open outrigger Jukung canoes from Bali to Darwin, through the Timor Sea. Bob Hobmann spearheaded this three-month mission and filmed it to create a documentary entitled “Passage out of Paradise,” and was eventually shown in the National Geographic as “The Great Jukung Race.” To stay true to the five-thousand-year-old practice, they followed the ancient Austronesian sailing routes via Komodo Island, along the eastern islands of Indonesia. They reached Darwin after a perilous 5-day sail through the Arafura Sea, via the Tiwi Islands.

The courageous sailors had to face heat, rain, storms, and strong currents, which also called for occasional boat repairs. They also encountered ocean titans in different forms—night-time freighters, and the great sperm whales and giant white sharks. Before entering Australian seas, the voyagers had to endure their toughest challenge—a cyclone with more than 110 km/hour winds aboard their small, bamboo and rope Jukungs at 6 ft long and 50 cm wide. As the 18 international mariners finally moored their boats in Darwin and successfully completed their expedition, a traditional welcome by local Melville Island Aborigines greeted them.

Despite one damaged boat, this epic adventure showed how the Jukung is masterfully built and highlights Indonesia’s seafaring tradition as a significant aspect of its history and culture. At present, several festivals in Bali relive this practice through fishing tournaments, art exhibitions, and cultural parades. Moreover, these events also aim to educate the local fishermen and the public on coral reef preservation to ensure environmental sustainability. 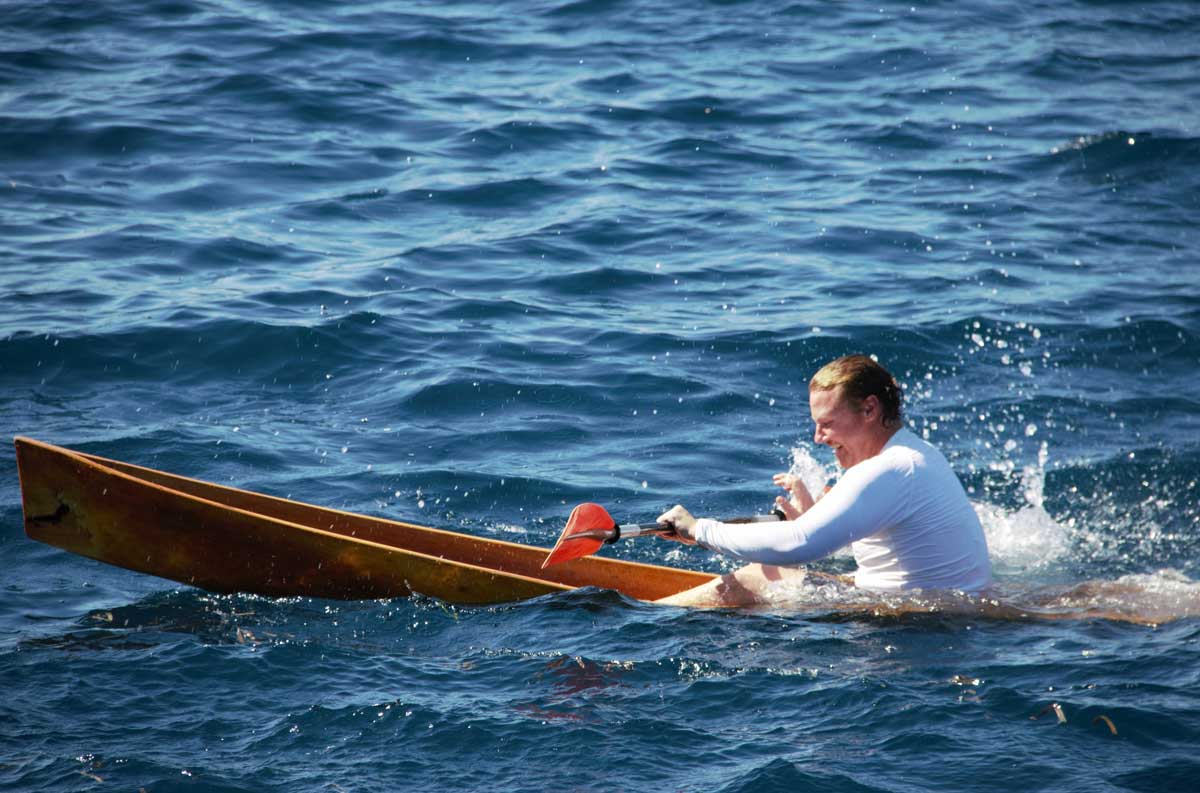 A Lamima guest trying to steer a lepa lepa

Traditionally built Lepa-Lepas that do not feature an engine are not easy to control and steer. The person-in-charge of controlling it must be able to recognize the features of the boat and how each individual part relates to the others. By understanding the key mechanisms and involving one’s self to each part of the boat, the navigator can effectively engage with the Lepa-Lepa as an extension of his or her extremities. This makes steering natural and instinctive. Furthermore, he or she should be familiar with the territory and its characteristics to foresee any effects of currents, weather changes, and the surrounding landscape. Adding a sail can also contribute to the whole dynamics of navigation as it allows the boat to be partially controlled by the wind.

Ideal for the curious adventurers who dream of embarking on a journey into Indonesia’s beautiful islands, Lamima provides a distinctive expedition through traditional ways of seafaring. Apart from its luxury sailing yachts that weave the safety and comforts of cruising in a well-equipped and stylish vessel, Lamima also offers an authentic seafaring activity through the Lepa-Lepa. Getting on this traditional, wooden, dugout canoe allows guests to appreciate a five-thousand-year-old tradition of maritime traveling. Lamima has two beautiful wooden canoes that guests would always be curious about. They are not easy to control and would require practice, but Lamima’s local crew are always available to help anyone who wants to experience steering a Lepa-Lepa.

Lamima endeavors for their guests to immerse with the locals and experience their daily routines. This way, tourists can deepen their understanding and appreciation for the Indonesian culture and become part of the movement towards its preservation and sustainability.