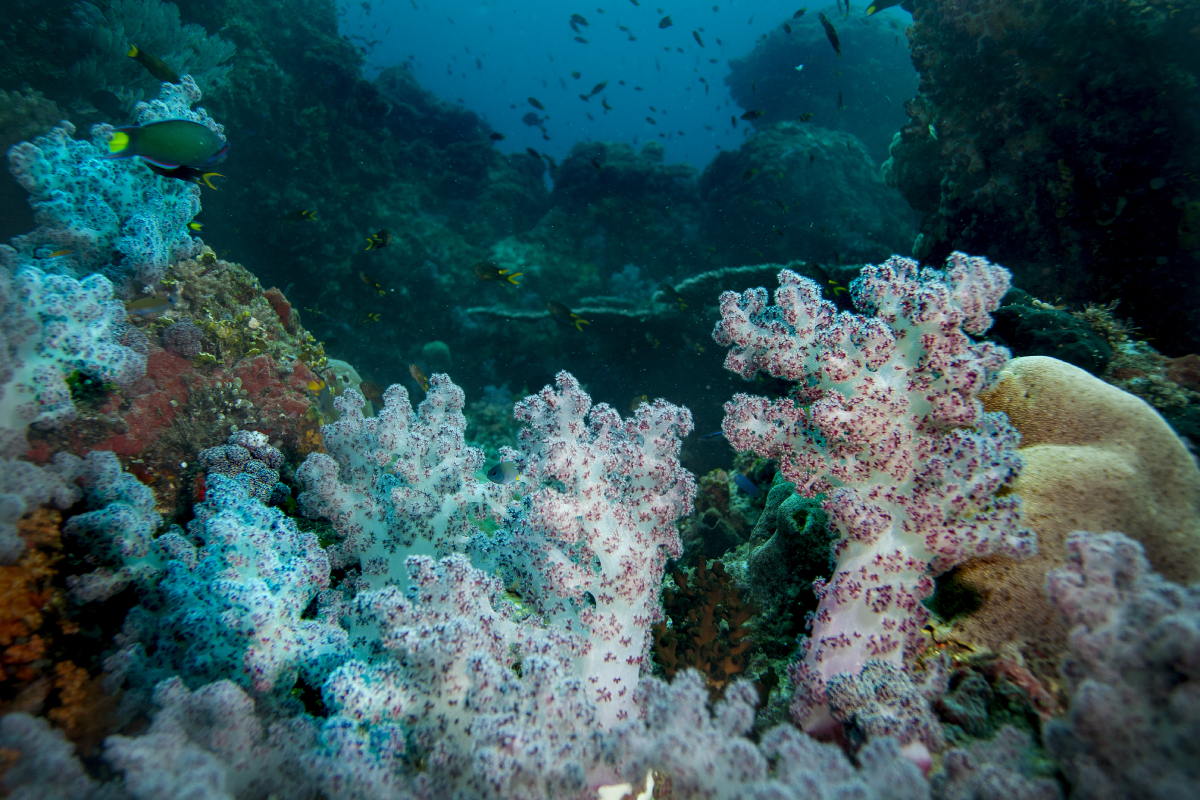 Nestled in the heart of the coral triangle, known as Indonesia’s diving final frontier, Triton Bay remains to be an unspoiled paradise for divers and ocean drifters. Its underwater realm serves as a home to several endemic species including the Epaulette shark who is known to “walk” on its fins and the bottom-dwelling Wobbegong shark, to name a few.

Triton Bay lies within the 597,000 hectares Kaimana Marine Protected Area, formally established in 2008. Still relatively unexplored, Indonesian authorities found the need to protect its biodiversity through the development of alternative sources of income for the local residents that are centered on conservation such as eco-tourism, rather than fishing.

Encompassed in the Kaimana Regency, located in the West Papua province of Indonesia, Triton Bay is best accessed through Kaimana Airport, its sole point of entry. The easiest route would be to fly from Jakarta. Daily flights with Garuda Airlines with schedules leaving at midnight from Jakarta and arriving in Sorong at 6 am is available. From Sorong, an hour connecting flight going to Kaimana via Wings Air is available.

Upon arrival in Kaimana Airport, you may access Triton Bay dive sites on Aiduma Island, 30 kilometers away by boat. Luxury sailing yacht charter in Triton Bay allows you to enjoy the whole experience in paramount ease and liberty. Luxury liveaboards have been the most recommended and preferred way to explore West Papua as it takes the experience a notch higher with its added amenities and services. The journey en route Triton Bay is not a short and easy one with several flights and a boat trip, it could easily tire, thus, a luxury yacht charter in Indonesia could really make a huge difference.

Relish the expedition by knowing the seasons and when best to book for your trip. West Papua has a tropical climate with an air temperature that measures around 30 degrees Celsius all throughout the year. There are two main wet seasons: July and August, and November and December. June to September is the Eastern Monsoon season where strong winds create rough conditions making it difficult for underwater visibility and traveling around Triton Bay.

Most ideal time to visit is during the dryer months, from January to May, when the water temperature rises from 26-30 degrees Celsius and brings better visibility. Between September to December, immediately after the monsoon, can also be good. During this time, water temperature is cooler and ranges between 26-28 degrees Celsius and visibility may be less but it is sure to present an incredible marine life with plenty of critters that you can find.

Dubbed as Indonesia’s last frontier for diving, Triton Bay offers divers an underwater experience that is uniquely distinct from other dive sites in West Papua. With its nutrient-dense water, visibility and water clarity may not be as great, especially for taking photographs, but this indicates high levels of plankton and food particles that attract a ton of marine life forms.

Being in a very remote area with access that is quite challenging, visitors are able to enjoy a serene, uncrowded, and undisturbed experience of Triton Bay’s ecosystem. Over 30 dive sites that range from walls and pinnacles, enormous boulders wrapped in corals, shallow carpets of colorful soft corals and abundant black coral gardens, and critters, have already been identified and more are still being explored.

Its nutrient-rich waters also allow for a colorful display of fish life from napoleon wrasse to giant groupers, eagle rays, schools of barracuda, a few sharks, and a vast array of reef fish, including fusiliers, surgeonfish, baitfish, and anthers that feed on planktons. Triton Bay also showcases remarkable macro diving from pygmy seahorses and flasher wrasse.

Discovered fairly new by Conservation International in 2006, Triton Bay’s dive sites have won the hearts of many avid divers and marine enthusiasts. Of the whole Coral Triangle, this region has been declared by international surveyors as the section with the most number of vibrant coral reef fish. Though about 30 sites have already been identified and named, there are still a lot more being discovered. 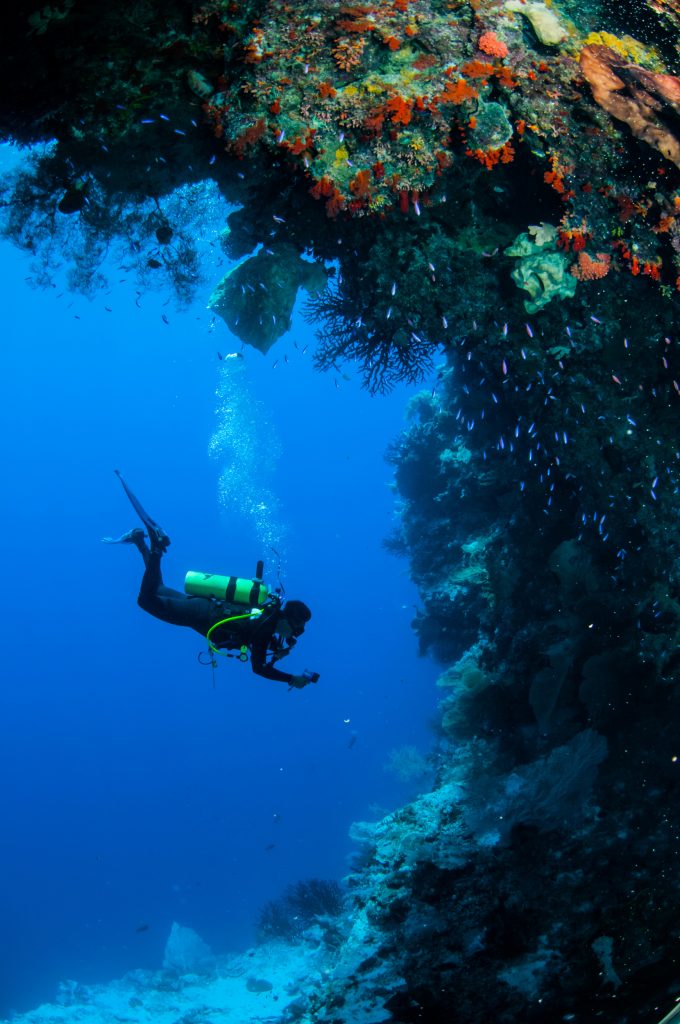 A small island situated at the center of the strait, this spot offers 4 astonishing diving experiences that are distinct from one another. The site includes the renowned Little Komodo and Aquarium.

Known for its massive boulders draped with utterly astonishing colorful soft corals and countless of fishes swimming by, Little Komodo has made itself the most sought-after dive site in Triton Bay. This site was named Little Komodo as it mirrors an all-in-one version of Komodo Island. Black corals can also be seen in this dive site with walls that could go as deep as 25 meters. Currents can be quite strong, making it challenging for the diver to explore its depths but this brings abundant groups of fish including giant groupers.

A small dive site positioned at the right of Little Komodo, the Aquarium was named by an American diver and traveler, Larry Smith. Packed with picturesque black and colorful soft corals, it vaunts flourishing marine life like bumphead parrotfish, yellowfin barracudas, and anchovies.

Adjacent to Little Komodo, this small and shallow reef site with sandy slopes, approximately 16 meters deep, is perfect for a more relaxed diving experience as the currents are relatively gentle. Bo’s Rainbow is home to schools of fish like the audacious Spanish mackerel along with several macro creatures like nudibranchs, pygmy seahorses, and purple skeleton shrimp.

Gentle sandy slopes where you can find rare species of fishes like the wobbegong sharks, epaulette sharks, and frogfish, White Rock is a spot with an alluring charm that easily captures the interest of divers. The enchanting soft coral bushes that cover the reef bottom can be dived during the day or night.

A rather challenging dive site with indistinct visibility and currents that are powerful, this site makes up for the challenge by offering an impressive array of marine life. The aquatic life ranges from yellowfin barracuda to wobbegong sharks, devil rays, bumphead parrotfish, schools of anchovies, as well as interesting micro creatures like solar-powered nudis and pygmy seahorse.

Also known as Flasher Beach, named after the striking Flasher Wrasse, this site is encompassed in a small island outside of Triton Bay, north-west of Aiduma. Flasher Wrasse is known to be the most colorful of all reef fish and they have only been sighted on this dive site.

Triton Bay does not only boast on its scenic and lavish diving experience. It is as beautiful above as it is underwater. Though known for its plush aquatic life, Triton Bay also displays a stunning tropical scenery and landscape with immense limestone islands.

Apart from the lustrous corals and abundant species of fish, divers also have the pleasure of swimming up close with the largest animals on the planet, the whale sharks, which can be a very powerful and moving experience. The whale sharks are present year-round and are charmed by the anchovies and baitfish caught by bagans or large floating fishing rafts.

Whale sharks can be intimidating because of its massive size, but by nature, they are graceful and friendly creatures that are not troubled by swimming alongside other creatures, like fish or humans. While they are generally harmless creatures, divers and swimmers are expected to observe proper modesty when swimming with the whale sharks by keeping a safe distance and not touching them.

Triton Bay is an isolated marine protected area with a preserved beauty that goes beyond expectations and being able to immerse in its splendor could be an experience of a lifetime.