The East Nusa Tenggara province offers an alternative voyage into unexplored islands of immaculate shores and clear waters. For experienced divers and adventure-seekers, Maumere and Alor abound with captivating sea creatures and distinct traditions, overlooking cerulean seas and abundant highlands. These islands perfectly illustrate the endless wonders of the Indonesian archipelago–a place that continues to excite and enrich. 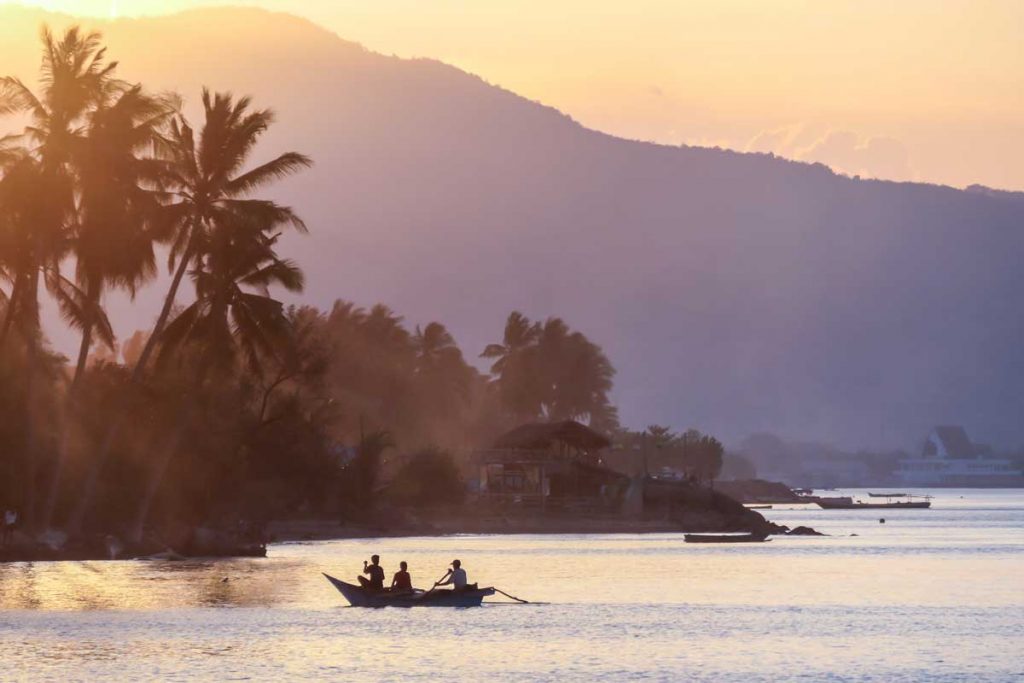 A sunset in Maumere, Flores, Indonesia

Gifted with a splendid setting of mountain ranges and hills enveloped in pristine waters, Maumere is considered a scenic gateway to the beautiful Flores Island in East Nusa Tenggara Province. It is the capital of Sikka Regency, located on Flores Island’s northeastern coast and a significant trade port for the whole of Indonesia. Maumere is described as a spectacular diving destination, especially the virgin Pangabatang Island and Koka Beach. One should also not leave the island without visiting Geliting Traditional Market, the oldest in Sikka Regency, for keepsakes and fresh crops.

A Trove of Sights 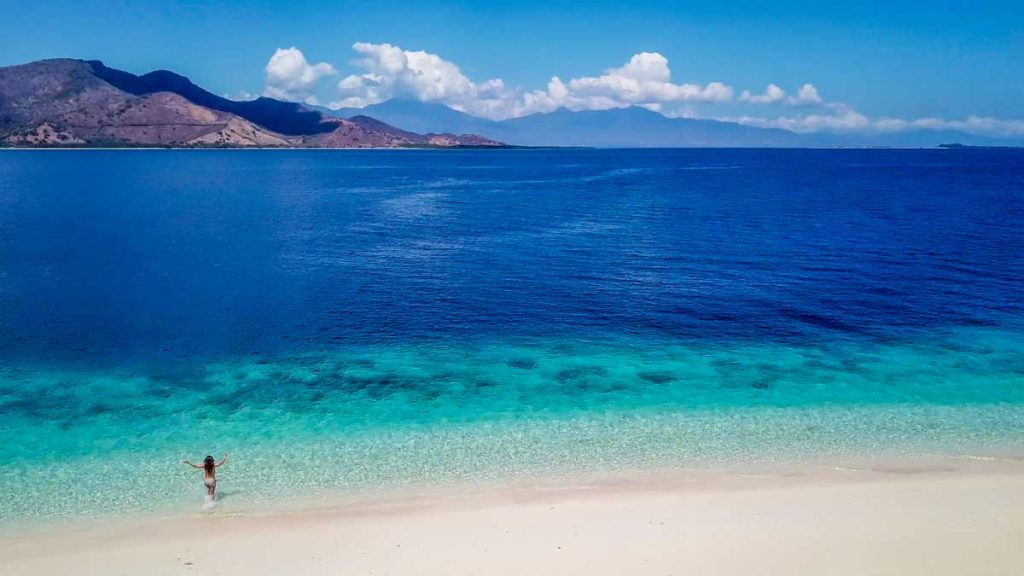 Located within Maumere Bay, the secluded Pangabatang is considered as one of the best diving sites on the entire island. One can privately enjoy this unspoiled enclave and soak in nature’s splendor—a vivid mountain backdrop and crystal blue waters. The island is accessible through a one-hour boat ride from the Port of Laurens Say.

Koka Beach, on the west of Maumere within Wolowiro Village, Paga Subdistrict, Sikka Regency, is another haven to behold for its silky and powdery white sand and snorkeling sites. The beach is also close to the Mau Lo’o village that features Maumere’s distinctive traditional houses. 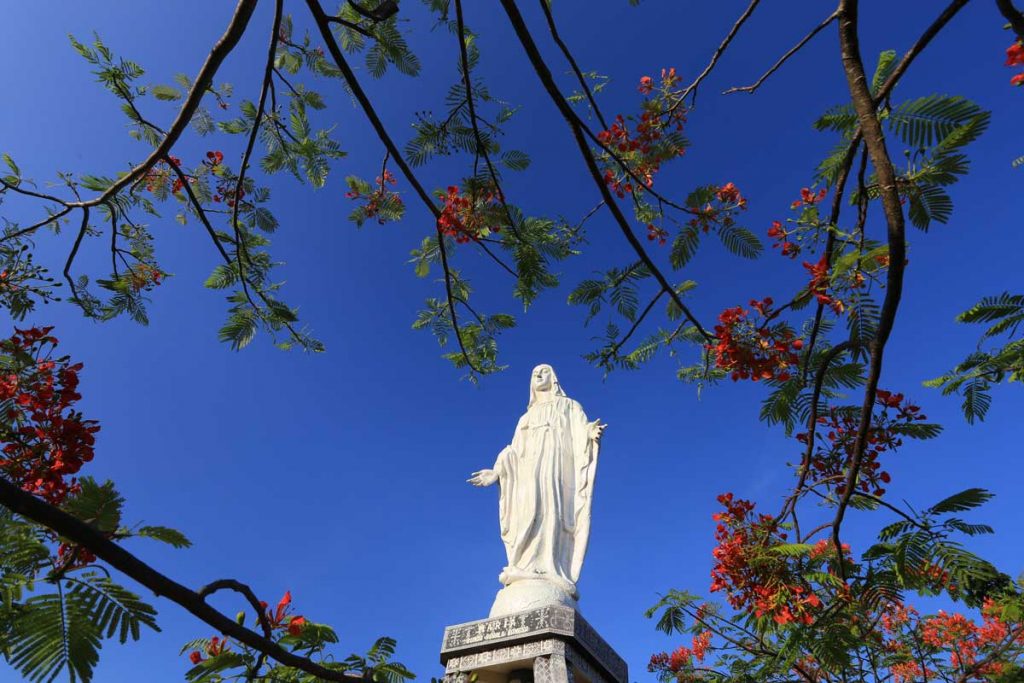 Hill of Our Lady Nilo Wuliwutik Village. It is a place of pilgrimage for Catholics with an atmosphere above hills surrounded by natural green trees.

As a predominantly Catholic island, Maumare’s Old Catholic Church that mirrors European architecture and built by St. Francis of Assisi in 1873, is also considered a point of interest in Sikka. Offering a similar reflective ambiance is Nilo Hill, a quiet place for prayer, where one can marvel at an impressive Maumare sunrise.

Before continuing on the journey, shopping for woven fabrics can be enjoyed as well as revitalizing with local traditional drinks called moke at the Geliting Traditional Market in Kewapante sub-district, where products are sourced from the whole Sikka regency. 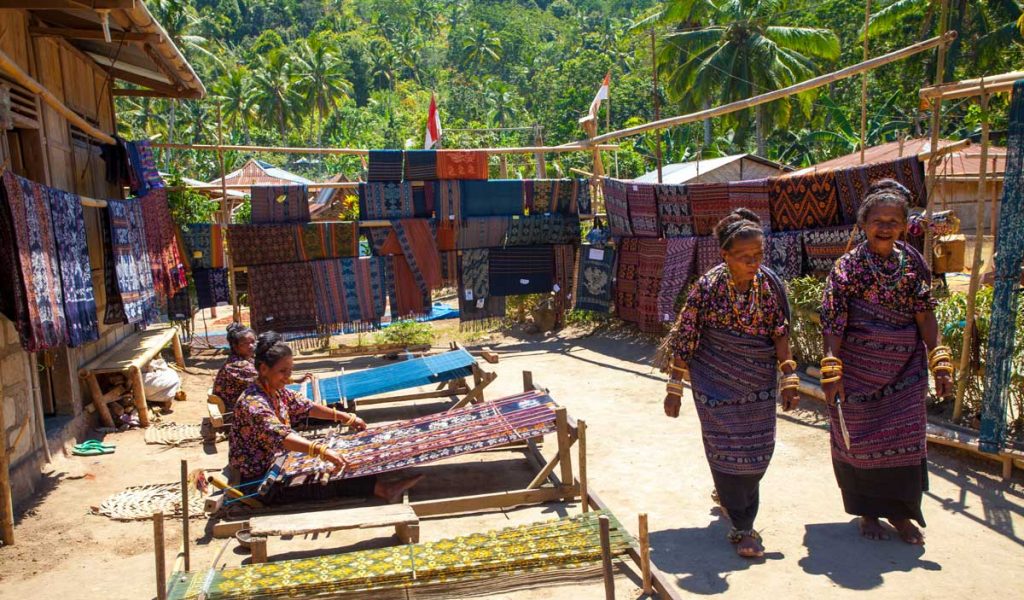 Discover Flores Island’s famous hand-woven creations at Sikka village, located 30 kilometers from Maumere, and witness the villagers’ process of ikat-weaving as they transform vibrant colored threads into unique and lightweight pieces of clothing. Watublapi is another village renowned for its use of figurative designs such as geometrical patterns as well as animals including lizards, horses, and birds.

For a truly immersive experience, travelers may find delight in visiting Maumere’s fishing villages and markets. One can peek into the life of the locals and set out on an adventure to explore hot springs and caves.

Maumere can be accessed by car coming from Moni, the usual jump-off point going to the famed Mount Kelimutu. A ride of the kijang, a local Indonesian vehicle resembling a large car built for rocky and winding terrain, will take approximately three hours. There is also a bus going the same route from Moni and other bus routes come from the south coast of Ende, which is farther from Maumere compared to Moni. Though there are options available in accessing Maumere, the city still remains untainted by tourism and conserved and protected by the local government, making it an interesting destination filled with culture and tradition. 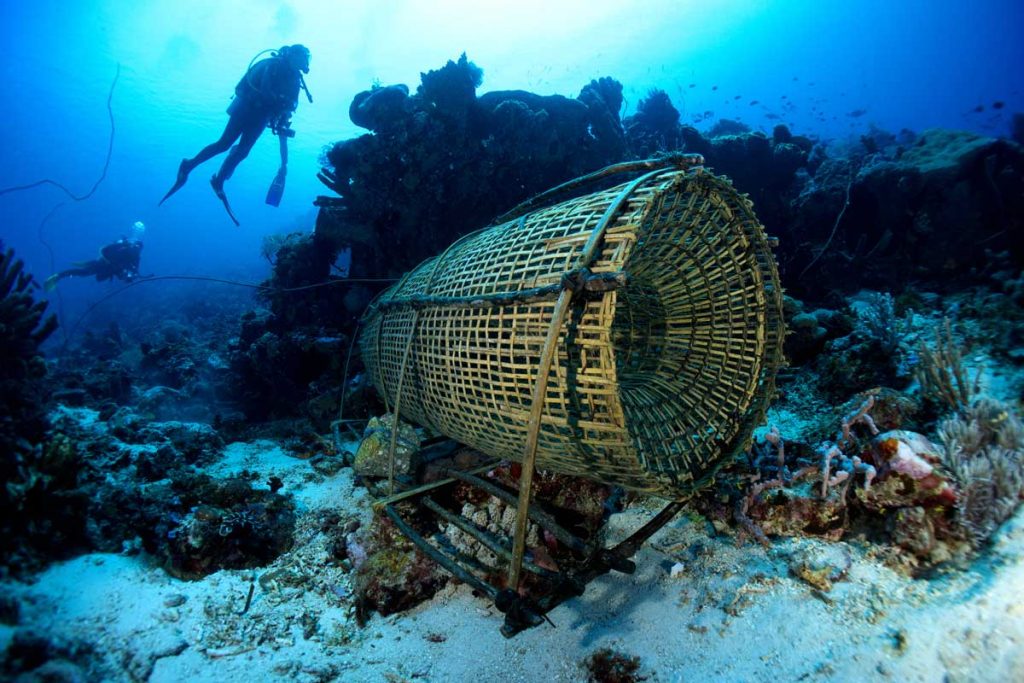 Part of Lesser Sunda Islands in the province of East Nusa Tenggara and stretching towards the eastern border of Flores Island, the Alor archipelago offers unparalleled charm to explorers and divers from all over the world. Its main island, also named Alor, features crystal clear waters that reveal a marvelous coral reef system below, visible up to 40 meters on dry seasons. Beneath its waters, divers may come face to face with the sought-after sunfish or mola mola, one of the heaviest bony fishes in the world. 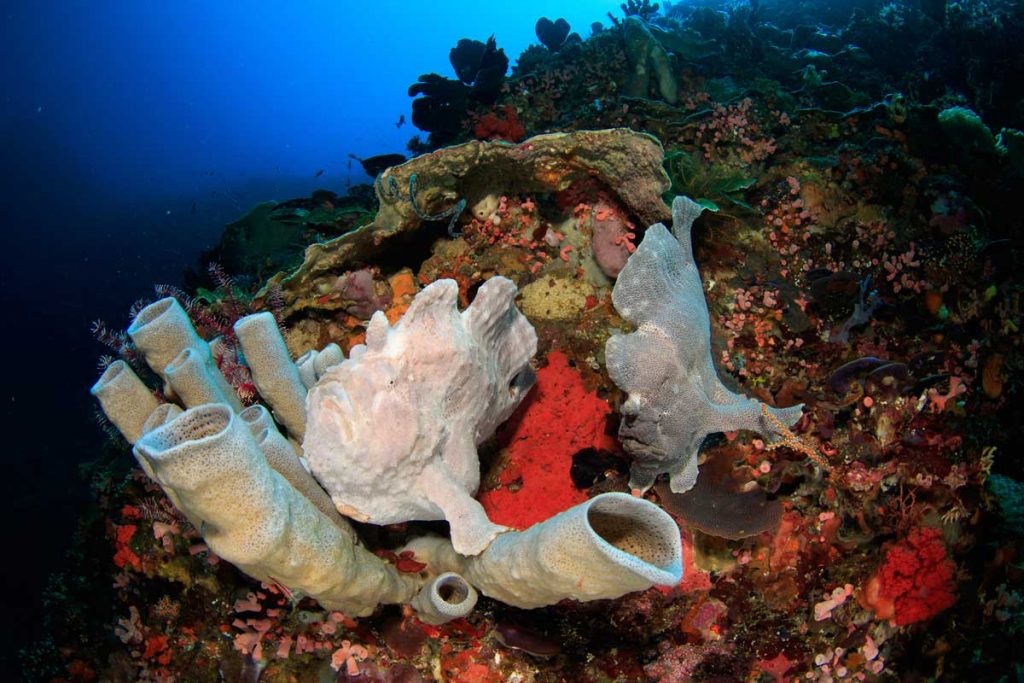 Comprising 20 islands and 17 sub-districts, the Alor archipelago is mainly a diver’s sanctuary with over 50 dive spots extending from Alor Island to Pantar Island, where the best underwater sites are located. Being the least developed portion of the East Nusa Tenggara province, the archipelago remains untouched, creating a serene and unique experience for adventure-seeking tourists. Divers often remark that because of its waters’ incredible visibility, it is not hard to miss its commendable number of marine life and lush coral. Night diving is also available in Alor, offering endless ways to soak in the island’s enthralling quality.

Alor’s remote location presents matchless opportunities for rare sightings of remarkable sea creatures such as scorpionfish, pygmy seahorses, and colorful nudibranchs, to name a few. The huge sunfish or more popularly known as mola mola, considered as one of the biggest bony fishes in the world can also be seen swimming in Alor’s luminous waters. The mola mola, recognized for its coin-shaped body, is usually found in tropical waters and can weigh up to a metric ton.

It is also in Alor Island, specifically in Kalabahi Bay, where more adventurous ocean explorers can enjoy muck diving, an underwater activity done in environments rich in sediments, which is a result of the island’s volcanic features. Divers can expect a feast for the eyes as they are rewarded with sightings of extraordinary marine life, such as the devil and hairy frogfish that are often camouflaged within the sediments. 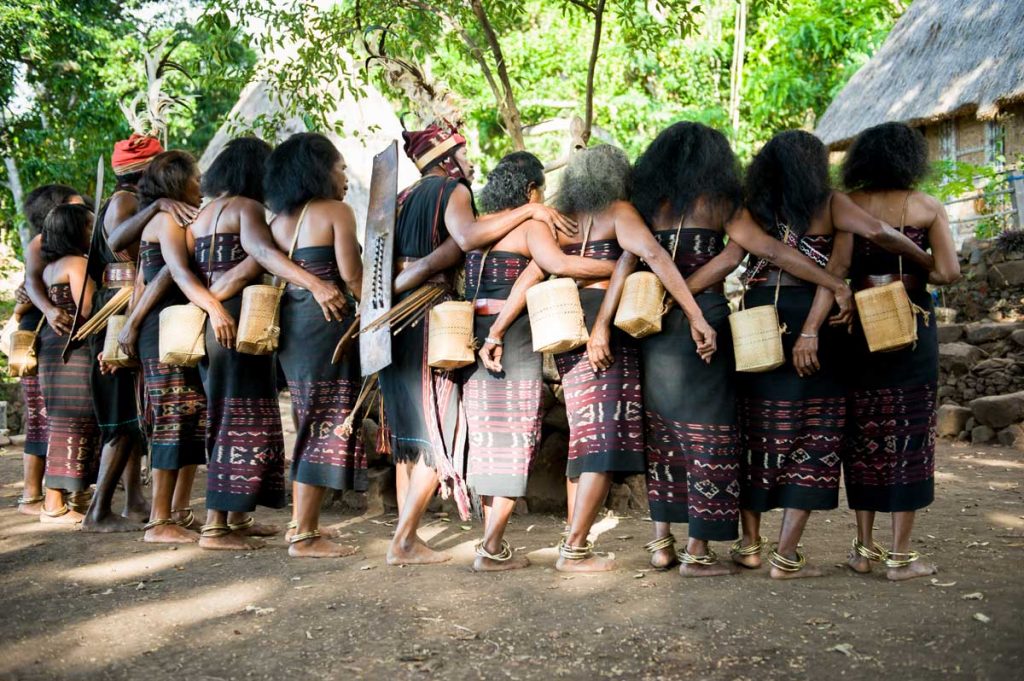 Equally notable is the island’s diverse Flores sub-ethnic tribes that add up to over 100 groups that still practice a traditional way of living. An hour away from Kalabahi, Alor’s main town, is Takpala Village where the customary pyramid-shaped houses covered with coconut leaves can still be seen. The village is also home to the Abui tribe, known to be welcoming to visitors. For a more authentic experience, it is best to visit them individually and in small intimate groups.

More of Alor artifacts can be explored in the Museum of a thousand Mokos in Kalabahi. Mokos are small bronze kettledrums that may be traced from Don Son practices in Vietnam. Displays of Kawate or Alor’s hand-woven clothing are also housed in the museum.

The Journey to Alor

One can reach the clandestine island of Alor through flights from Kupang in West Timor, capital of East Nusa Tenggara; then from Kupang, flights are available to Mali Airport in Kalabahi. Connecting to Kupang is easy via trips from Denpasar, Maumere, Ende, Jakarta, and Surabaya, among others.

For those who wouldn’t mind a longer journey at sea, taking a ferry that will take a 12-hour trip from Kupang to Larantuka is another option. From Larantuka, Kalabahi Seaport is accessible via one-hour boat rides.

CRUISING THROUGH MAUMERE AND ALOR 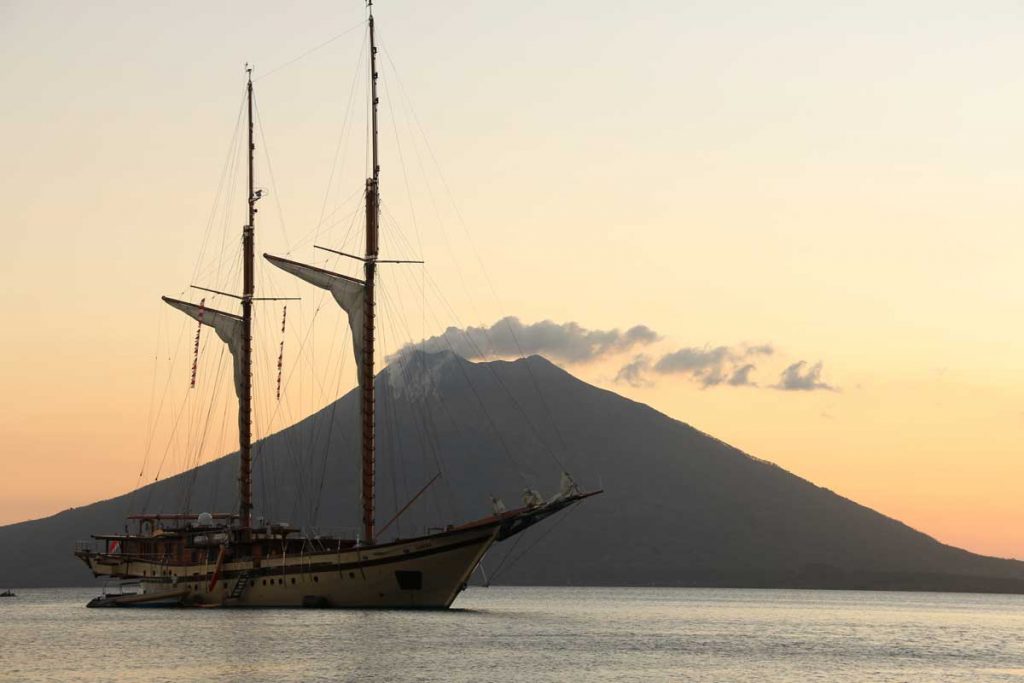 Lamima cruising in Lembata Island (Ile Lewatolok on the back ground), we will have a stop on this beautiful scenery when we go from Maumere to Alor.

Both Maumere and Alor remain to be highly protected and uncrowded. An exceptional way to visit these two untouched islands is through cruising the ocean waves with a luxury sailing yacht. Lamima offers charters in Maumere and Alor from May till October and suggests a 1 to 2-week period to fully explore these hidden gems.