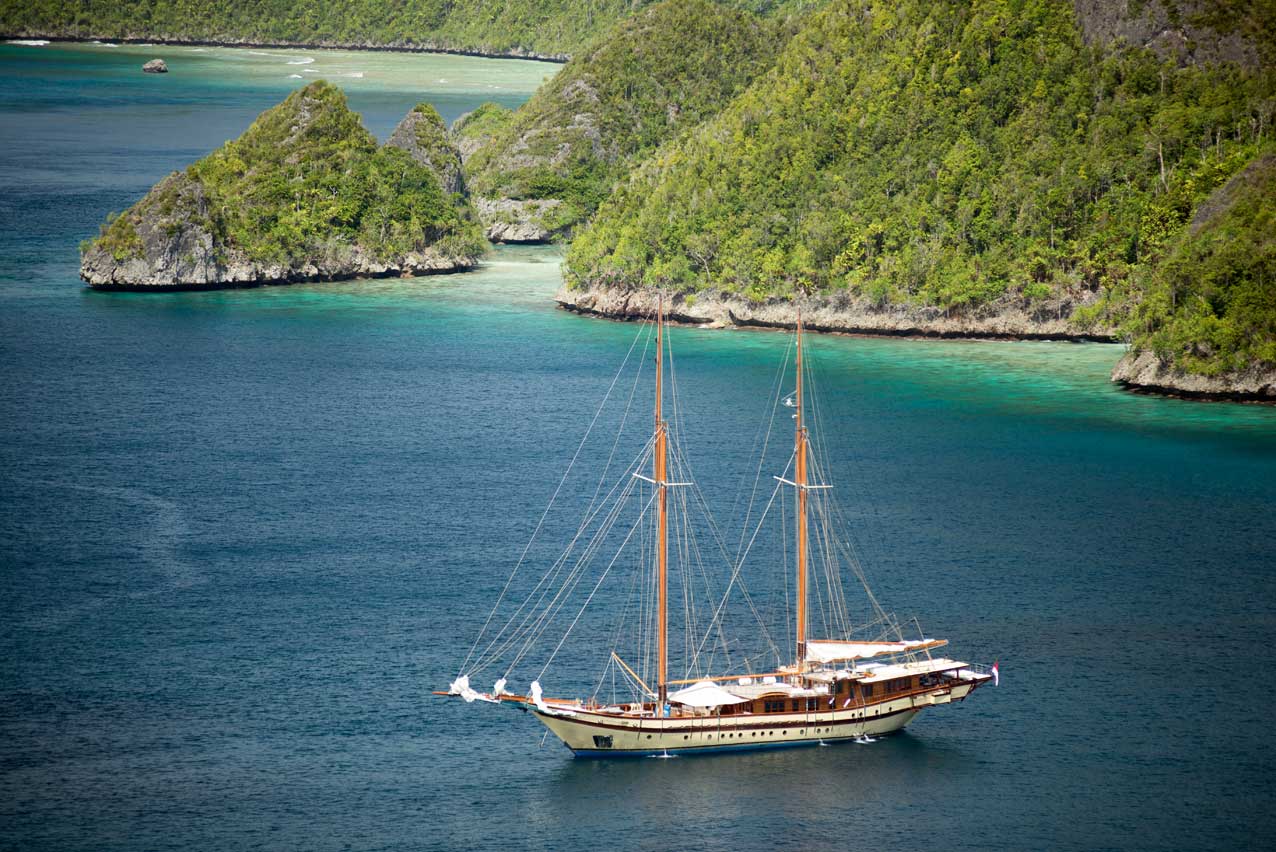 An Indulging Journey to Heaven’s Paradise on Earth: A Glimpse of Raja Ampat

A gem hidden amongst the remote parts of Indonesia, a cluster of scenic islands that serve as a refuge to rich aquatic biodiversity, a dream destination to divers and ocean crusaders, Indonesia’s Raja Ampat is a clandestine treasure that gracefully unfolds. A gratifying experience awaits those who seek for a momentous journey at the archipelago known as “The Four Kings”, secluded in the Northern West of Papua, Indonesia.

A lush group of islands with an abounding resource of richly 75% of the world’s coral species including a portion of some of the rarest flora and fauna that can only be found in the azure waters of Raja Ampat. The adventure-filled archipelago is dreamt by experienced divers and nature voyagers who are in search of real paradise.

Raja Ampat is an illustrious destination that is filled with beauty that has remained untouched and has yet to be fully discovered. Each of its islands possesses marvelous attractions that leave travelers yearning for more explorations. 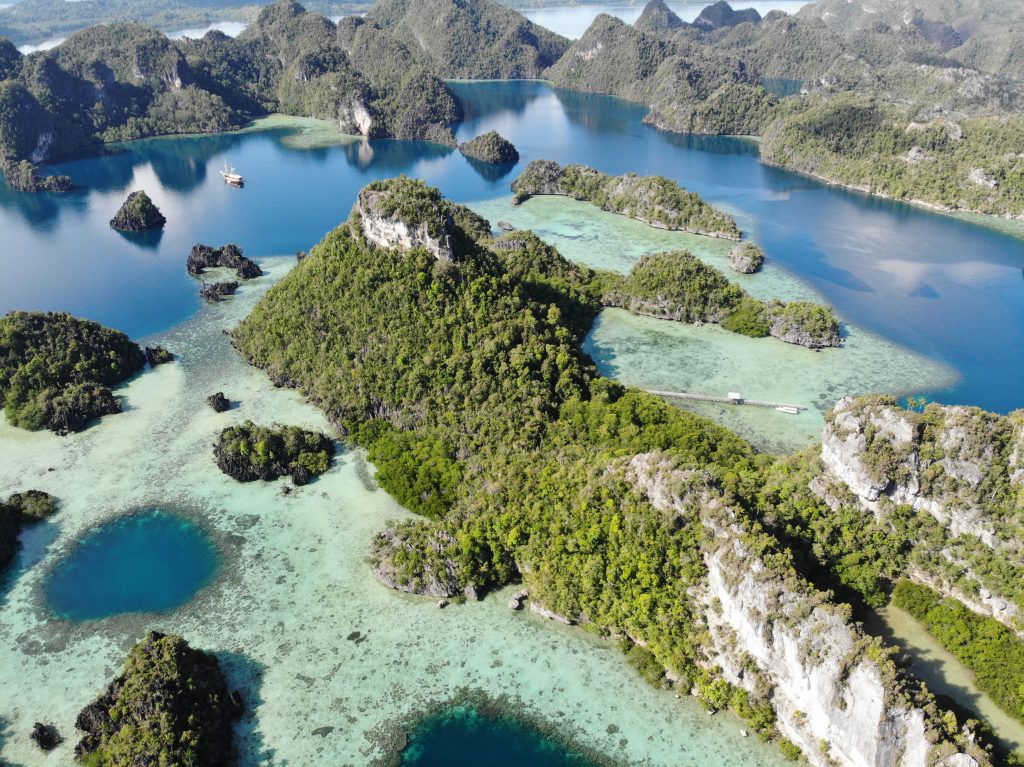 Located 20 km east from Misool Island, Farondi is a small group of islands recognized for its elaborately delicate seascape. Blessed with a profuse marine life and quaint coral reefs, the island boasts of several of the best dive spots in the Raja Ampat archipelago. It displays exceptional mimic octopuses, seahorses, and nudibranch swaying smoothly on its glassy waters amidst the dynamic sunken life. Its gentle nature and soothing atmosphere invite visitors for a tranquil lounge amongst its picturesque beauty. Marvel the splendor of the island up-close through a cruise within isles on a kayak or a paddleboard. 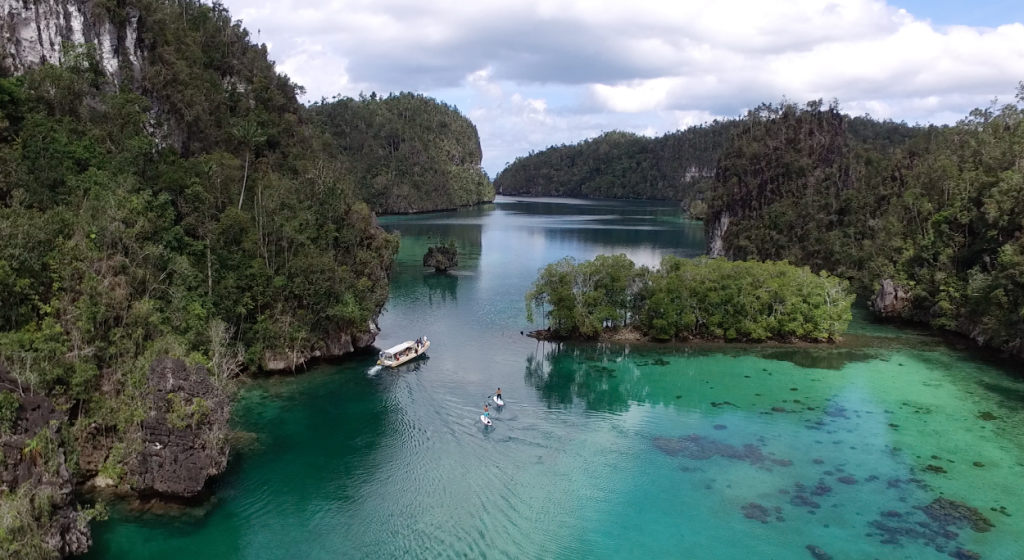 Settled within an isolated lagoon contained in a plush forest abundant of vigorous foliage and flawless turquoise water, millions of years of seawater erosion towards the limestone has crafted a glorious entrance to an exquisite cave baptized as Tomolol Cave. An assemblage of caverns along the limestone façade, the mysterious cave is deemed sacred to the local Muslims with a shrine purposefully set by its dramatic entrance. Endless water flows placidly through the cave continuously carving peculiar yet marvelous forms that are perfected by gleaming stalactite formations, immaculately balancing the cave’s natural obscure and eerie sense. Under natural light, you can spot around a series of perplexing red-ochre paintings from thousands of years ago. There is also a picturesque viewpoint where you can see the heart-shaped lagoon.

Explored best by swimming and snorkeling through the cave, and coasting its lagoon, abundant of orchids and rare flora, by kayak or paddleboard. A theatrical seascape provides a sensational diving experience through overhangs and alongside walls draped with vibrant hard corals and plentiful aquatic species.

Fam Islands is home to one of the best diving spots in Raja Ampat, Melissa’s Garden, known for its oval-shaped reef snuggled between 3 small islands and packed with an assortment of underwater species. Other equally striking spots that can be found in the Fam Islands are Rufus and Anita’s Garden. Beyond the underwater experience and way up on the hills is a viewpoint that presents a panoramic image of the verdant mountains and serene waters. Fam Islands also holds a small village with a fascinating local culture. 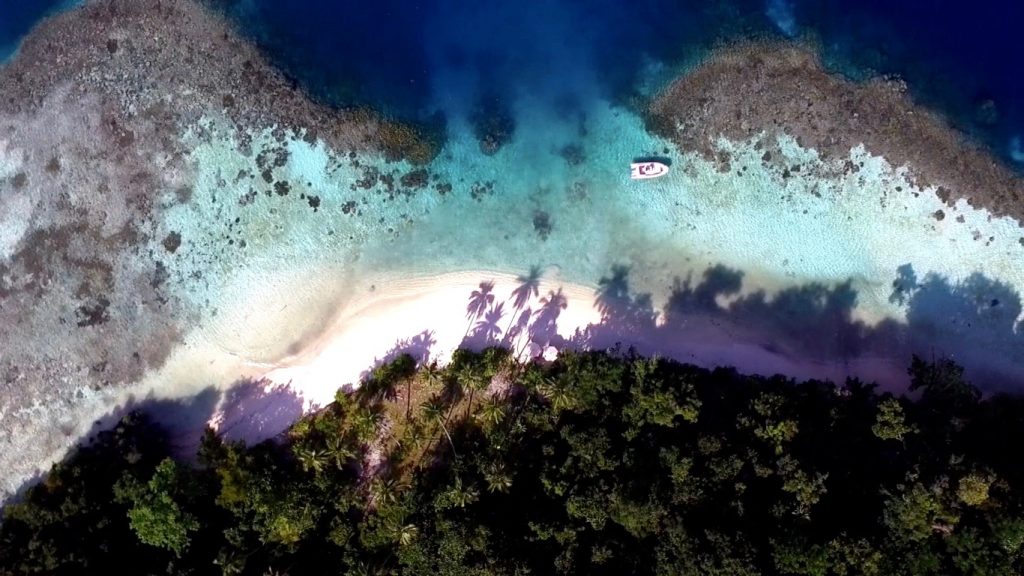 Two glorious islands with virgin white-sand beaches fringed with palm trees and forceful undergrowth, connected by untarnished coral reefs, Wofoh’s vibrant and serene waters make it a perfect spot for some rest & relaxation. The island gems’ flawless landscapes reflect its equivalently seamless underwater jungle that is extremely rich with wide-ranging varieties of sea fans, vivacious hard and soft corals, schools of fish from surgeonfish to yellow-fin barracuda and occasional sightings of unicornfish, including the surreal nudibranch and pygmy seahorses, Hawksbill turtles, crocodile fish, and the endemic Wobbegong shark or also known as the walking shark. The island also has an unspoiled beach and a local village that travelers can visit. 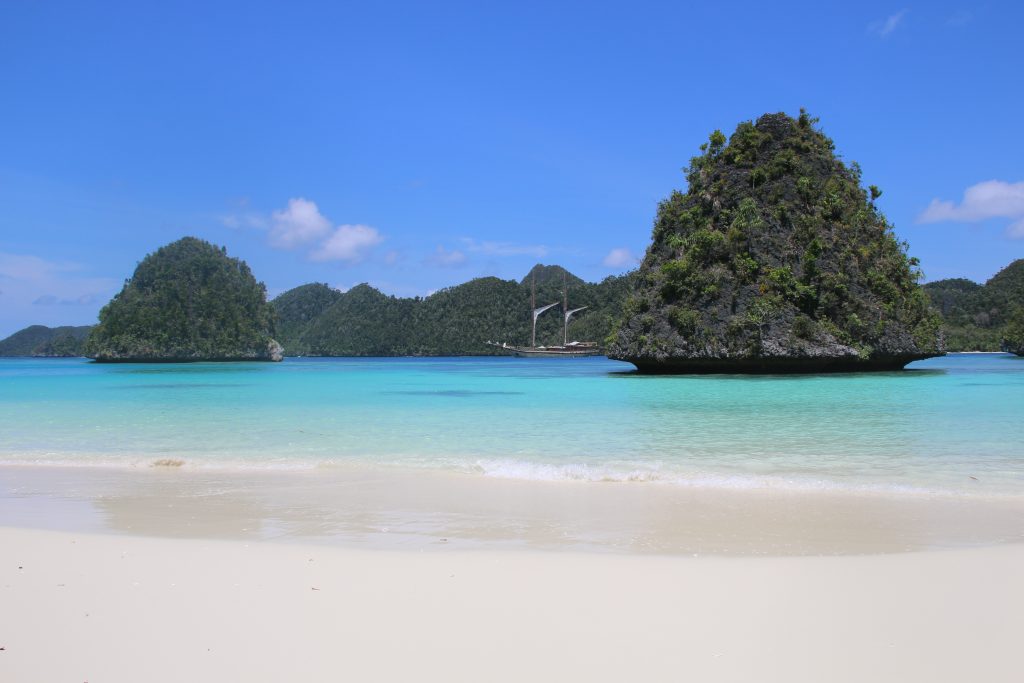 The poster child of the Raja Ampat archipelago, often featured in tourism promotions and magazines, recognized for its distinct mushroom-shaped karst isles, Wayag Islands is deemed to be more captivating than most virgin beaches seen on print and films. Displaying a picturesque panorama of crystal clear waters that seamlessly reflect the purely painted skies, as if a glass mirror that perfectly showcases a balance of the skies and the vigorous life under the sheaths of the sea.

Celebrated for its striking coral reefs and whimsical underwater life, Wayag Island is easily one of the finest islands that the archipelago of Raja Ampat has. Best explored with a kayak, paddleboard or onboard a private luxury yacht charter. Cap off the fanciful journey with an experience of feeding Blacktip Reef Sharks by the ranger station. 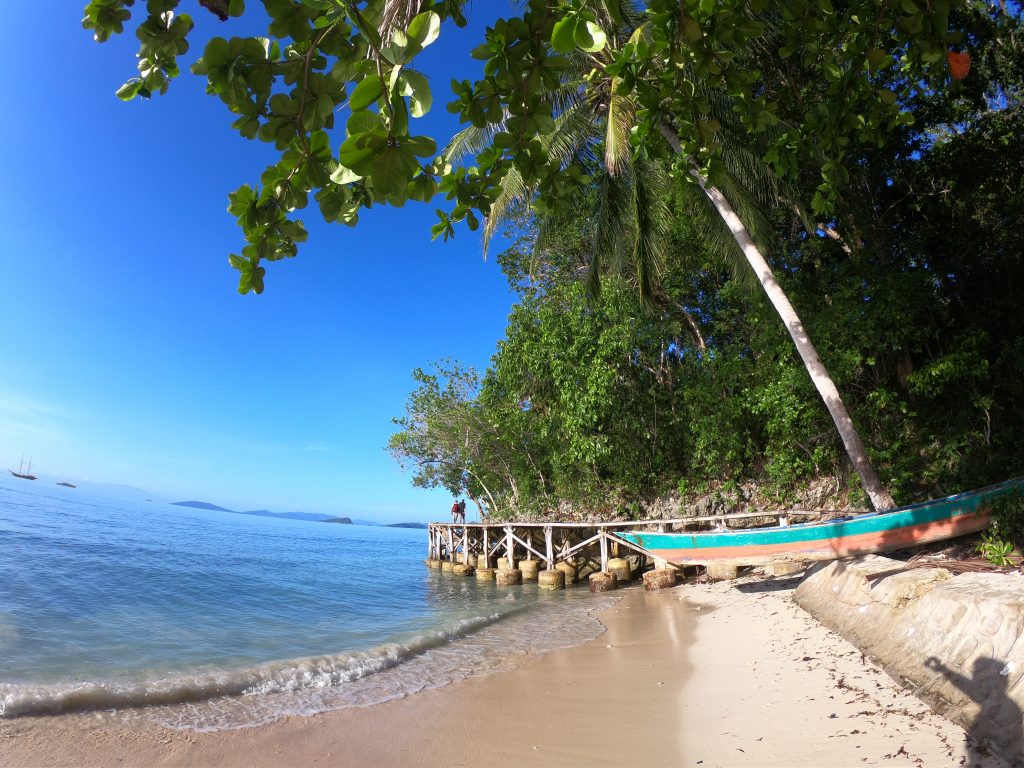 The largest of the “Four Kings”, one of the main islands of the Raja Ampat region, Waigeo holds the size of over 3,000 square kilometers with over 900 kilometers of coastline length and about 34 number of villages. Nestled on the southern shore of Waigeo is the capital of the Raja Ampat regency, Waisai, the entry point of the province for most tourists. The island can easily be accessed by public transport, although exploring the island’s full diversity can be quite a challenge. Home to a wide range of attractions, Waigeo offers impressive dive spots with thriving reefs on uninhabited islands, scenic bays, rocky islands and walls of towering cliffs. North Waigeo offers the best-unexplored surf spots wide open to Pacific swells and perfectly lined reef breaks during its season – September until March.

Wrapped in mainly flourishing, unblemished and wild rainforests, a great portion of the island still remains unexplored. Waigeo’s tropical wilderness nests a rich wildlife brimming with birds including the iconic Wilson’s Bird of Paradise, only found in two spots in the world, both in Raja Ampat – Batanta and Waigeo 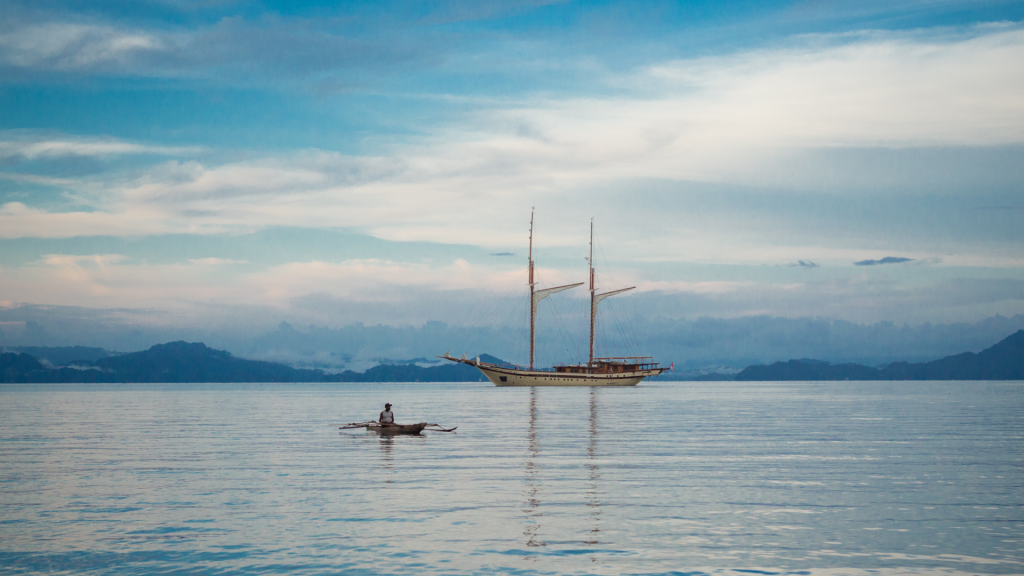 Located between Gam Island and the South West of Waigeo, Kabui Bay is bordered by an incredible display of karst formations boldly sprouting from the sea and draped lush green vegetation. A view from above uncovers its widespread tropical rainforest, mangrove forests, and fine white sandy beaches.

As with all the other islands encompassed within the archipelago of Raja Ampat, Kabui Bay also holds stunning coral reefs and abundant aquamarine life in a concealed setting that can be accessed by traversing through two pronounced coral islands. A diving or snorkeling session will take you to a remarkable underwater world where you will find schools of bumphead parrotfishes, among other marine life, and be entranced by the countless varieties of soft corals.

Kabui Bay’s beauty has remained fittingly covert allowing for its natural charm prolong its pure and unspoiled state. A seamless meeting point at the end of the bay branded as “The Passage” allows for a pensive union of the desolate jungles with the still and reflective waters of the inlet. 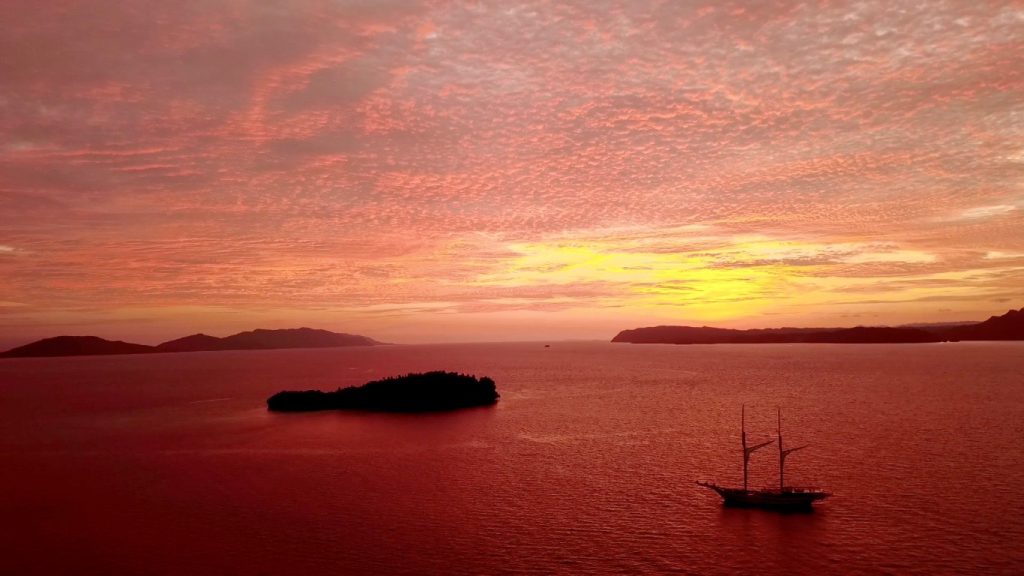 Relatively smaller than the other islands in the region, Mioskon Island serenely sits between Gam and Waigeo, on the northern side of Dampier Strait and near the exit of Kabui Bay. Also dubbed as the “Bat Island” for its extraordinary cloud of flying foxes dwelling and whistling shrilly as they awaken from their slumber, posing a striking presentation. Resembling the shape of a heart, Mioskon is also labeled as the Pulau Cinta or Love Island by local Papuans.

Surrounding the tiny yet flourishing island is an immense selection of diving spots that features dispersed majestic corals swarmed with colorful and rare fish species including wobbegong sharks, pygmy seahorses, schools of fish, and a chance encounter with the gentle manta rays. The world’s largest clam or giant tridacna clam, measuring up to 1.50 meters long and weigh more than 200 kilos, can also be found on Mioskon Island. 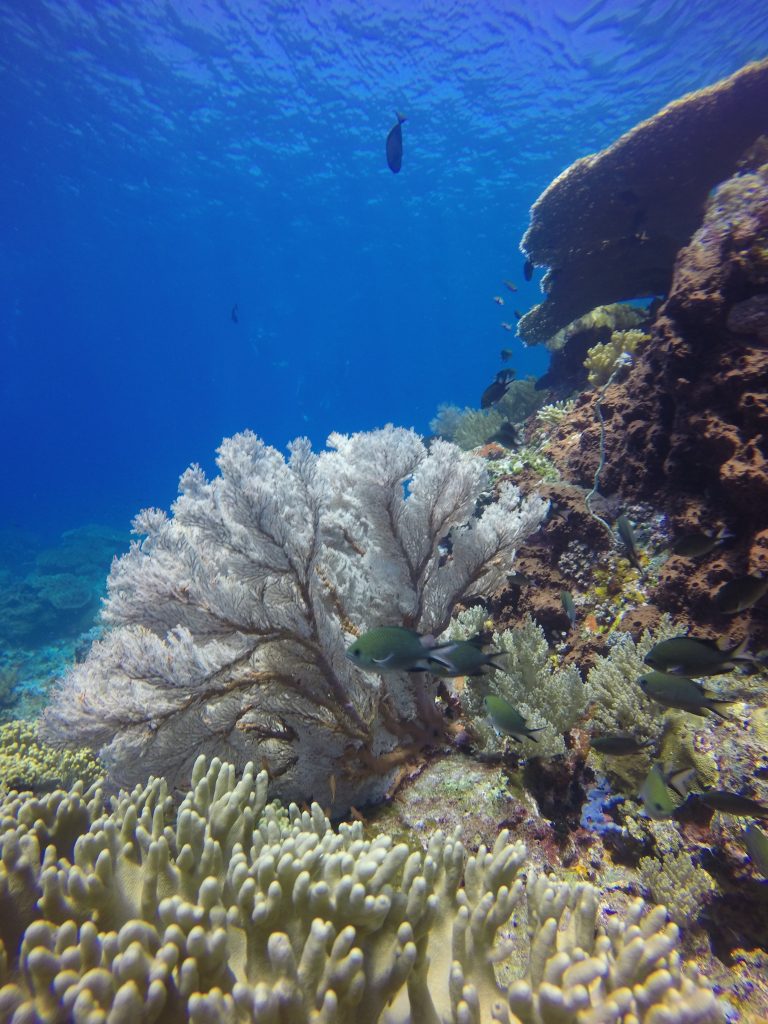 A small isle adjacent to Pulau Mansuar, disjointed by a narrow and shallow strait, Kri Island is a small, extensive, narrow, and forested island known traditionally as Mansuar Kecil or the Little Mansuar. Considered as the most popular island in Raja Ampat, the tiny island boasts of its vigorous reefs in its surroundings, brilliant beaches, and several homestays and dive centers.

Its forest wildlife is also thriving with reptiles like large monitor lizards and an assortment of bird species. Although jungle trek is not as easily available as the terrain is steep and there are very few trails, there is a path to a point by the western end of the island, perched atop a small hill with a marvelous panoramic view of the Dampier Strait and adjacent isles and offering an impressive sunset experience. The limitations on jungle hiking possibilities are aptly compensated by long beach walks and sandbank crossings at low tide. 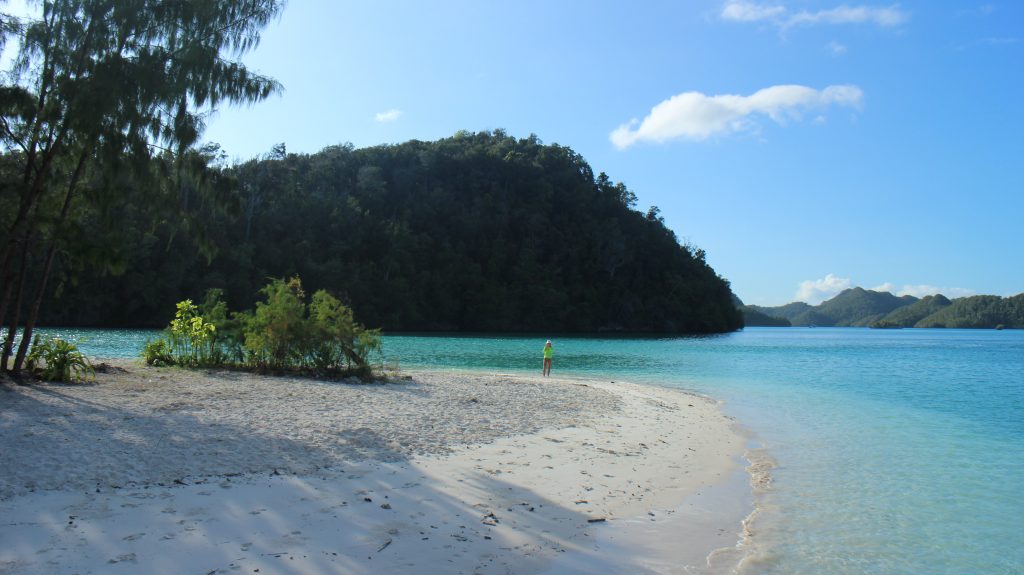 Out of the Four Kings or main islands of Raja Ampat, Batanta Island is considered the smallest at 60km long and 8km wide. While the other islands brag its spectacular seascapes and underwater wildlife, Batanta is praised for its densely lush rainforest which is home to many remarkable wildlife species and powerful waterfalls which is its main attraction. Trekking would be the best approach for exploring the island that seizes long white sand beaches and calm crystal clear waters perfect for water activities like paddleboarding, kayaking, and wakeboarding.

Undoubtedly one of the world’s finest haven for divers and nature aficionados, nowhere near busy and crowded cities, pollution and noise, the island paradise that is Raja Ampat is an island worth the exploration, waiting to show its wonders to those worthy of its attraction. Such remote and untouched beauty is best explored through the eyes of the locals, achieved by eco-sustainable and luxury sailing yachts that have an all-local crew.