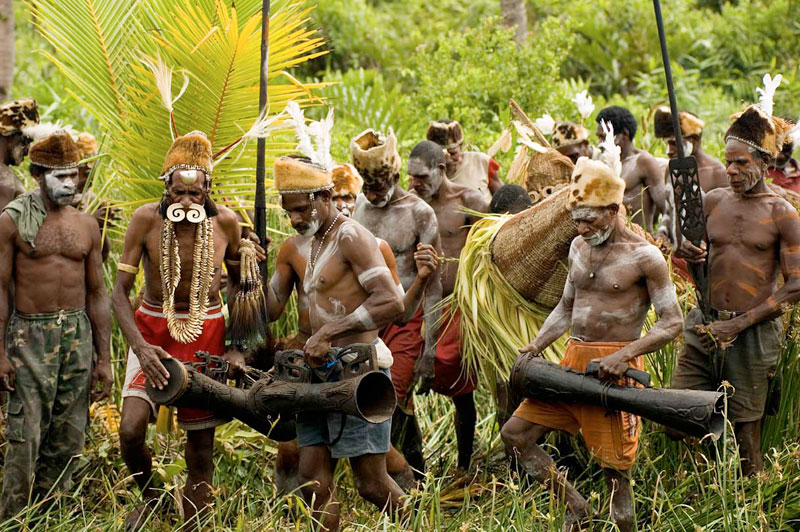 Southeast of the country known to be beauty and culture-filled is a wide strip of tropical land by the name of Papua, where many rivers go through flat plains and mangrove forests. The plains here are low, so much so that during the rainy season, high tide can penetrate as much as two meters inland. In low tide, Papua’s plains become impassably muddy. Yes, Papua is an alluvial swamp – the largest one in the world. This low-lying territory contains meandering rivers that flow out to the Arafura Sea. Papua is also home to many quagmire forests or wetlands, and along its banks reside huge lizards. The waters in this region are also well known for being a habitat for gray nurse sharks, crocodiles, dolphins, sea snakes, crabs, and shrimps. What Papua is most known for, apart from its stunning dive spots, is the fact that it is home to the fascinating Asmat Tribe.

Although Papua may be considered a landscape that is practically inhospitable to modern human life, the indigenous Asmat have lived here for many generations. They continue to thrive today, with their regency covering 23,746 km2, roughly 7.44% of Papua in its entirety. The Asmat live here, along the many rivers that all flow out into the sea of Arafura. This tribe is estimated to be 70,000 strong, with their population divided into a few hundred villages. Each village varies in size, with some holding as few as thirty-five and others holding as many as two thousand inhabitants.

The Asmat – an Indigenous Tribe with a Glorious History

“Asmat” is a name that is thought to come from the phrase As Akat, words that to Asmat mean “the right man”. Others counter that the name is derived from Osamat, a word that means “man from a tree”. Once infamous for being fierce warriors dreaded by many, the Asmat tribe were fearless and proud, following and defending their culture and beliefs. The Asmat once practiced head-hunting – a piece of culture and tradition that is now diminished in the modern world. But the Asmat were more than just ferocious, head-hunting warriors but skilled artisans too. Indeed, this formidable tribe also contributed art through their admirably complex culture. The Asmat Tribe is well known for their wood carving and sculptures. They have created some of the finest wood sculptures the world has seen, and it comes as art that is exemplified with strong lines and designs. These talented artists can easily carve a sculpture out of a tree, and they do it with such fine workmanship that it is easy to see why their works are coveted by art collectors worldwide.

The Otherworldly Art of the Asmat

Among the world’s finest primitive arts is that of the Asmat’s wood-carved masterpieces that are celebrated by art collectors and connoisseurs. Not known to many is that to the Asmat Tribe, their woodcarving is interweaved and intimately linked together with the ethereal or spirit world. Hence, their work is not simply meant to be used as décor and merely aesthetics but must be given the highest regard and appreciation. Much of this tribe’s original wood art is symbolic – of headhunting, of warfare, and of the veneration of warrior-ancestors. For many centuries the Asmat were preoccupied with the need to appease their ancestral spirits and so they designed their canoes, shields, sculpted figures, and drums with exquisite and intricate art that is of high standards. Many of these items are masterpieces that are still being displayed at the New York Metropolitan Museum of Art.

Today, wood carving continues to flourish as a tradition among the members of the tribe. Woodcarvers of the community are always held in high regard, second only to the tribe’s fiercest and bravest warriors. The Asmat believes that a close relationship exists between trees and humans. The tribe also recognizes wood as a source of life.

In Asmat beliefs and myths, a being by the name of Fumeripits was first to exist on Earth. It was also Fumeripits that created the first jeu, or a men’s ceremonial house. It is in this house that the community discuss issues, create art, and hold ceremonies. As the first being, Fumeripits spent his days dancing along the shores of the beach, but over time he eventually grew tired of the loneliness. And so, he cut down trees and carved the wood into the shape of human figures, which he placed inside the jeu. Unhappy with inanimate carvings, he created a drum with wood and lizard skin stretched over its top. As Fumeripits played the drum, the figures miraculously began coming to life, giving Fumeripits companionship.

The Asmat considers Fumeripits the culture hero, to be the absolute first carver. All of the subsequent carvers are known by the name wowipits and are all held to an obligation to continue Fumeripits’ work in their great tradition.

The sculptures made by the Asmat are typically commemorative of particular individuals who have passed on, although they are not direct representations of the individuals. There is a common pose for the figures known as the wenet (elbows-to-knees). In the Asmat belief, the wenet is the very same pose all human beings assume in birth, and finally in death.

The Asmat Tribe celebrate its wood carving tradition every year with a cultural festival that gathers all the small villages for an exhibition. They enthusiastically showcase their skills on weaving, boating, traditional dances, and musical performances. An open auction of the fine artworks made by the Asmat themselves concludes the 5-day festival. 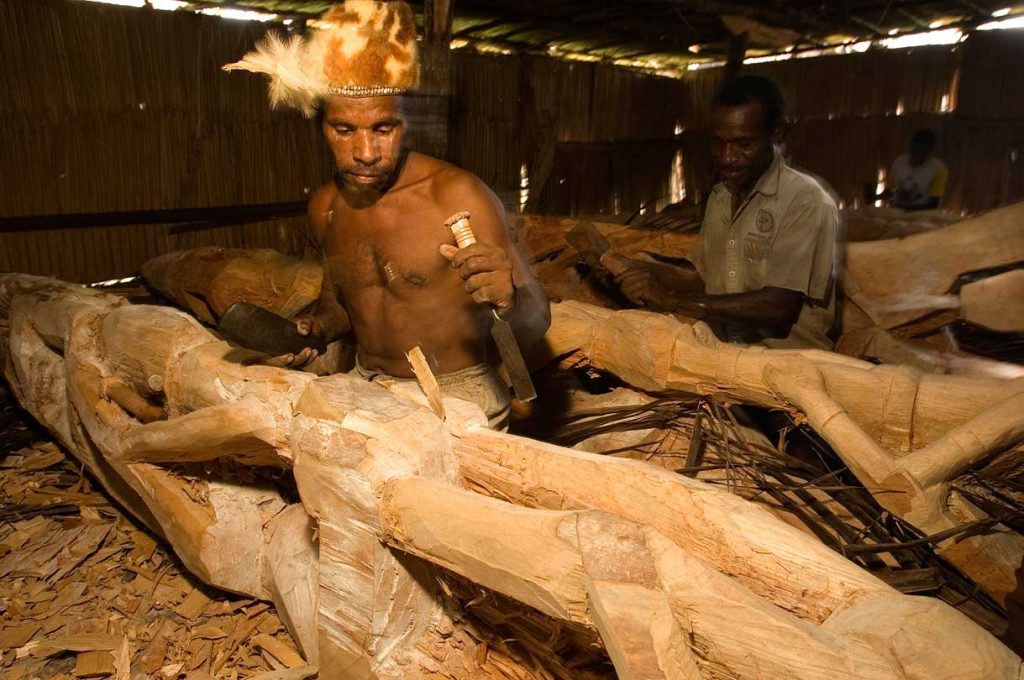 The Spotlight On Agat Region

Michael had been so deeply impressed with the Asmat Tribe’s wood carvings during his first expedition that he decided to go again on a second expedition. At this time, he intended to take some of the sculptures back home to the United States for an exhibition. The reason for his disappearance is still unclear and remains a mystery. However, Michael Rockefeller was indeed successful in collecting Asmat art, as it is his contribution that comprises the majority of the Asmat carvings that are on display at the Metropolitan Museum in New York.

It was about this time in the 1950s and 60s that foreign expeditions thrust both the Agat region and the Asmat tribe into the modern world. Before this, the tribe was untouched and completely isolated from civilization.

In recent years, the inhospitable alluvial swamp that is Papua has become easier to visit. What was once a muddy swampland is now a place that has been introduced to modernity. Infrastructure is being consistently developed to connect areas of this island, making impassable mud lands finally passable. Accessibility is not the only improvement made. Much of the infrastructure developed is to provide clean water and improve health in the area.

To see the treasure trove of culture that is found in Papua, you’ll have to charter an Indonesian Yacht. When visiting the Asmat Tribe to witness and immerse in their culture and impressive woodcarving, you must first fly to Jakarta or Bali. From there, you must take a domestic flight to the local airport of Timika. Once landed in Timika, continue your journey by smaller plane to the place of Ewer. Finally, in Ewer, you will need to charter a boat to the town of Agats. Agats is both the gateway and the administrative center to the Asmat Regency, and a Raja Ampat yacht charter may be the best choice for you to find your way there.